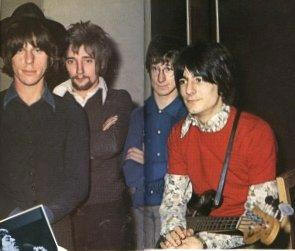 From the 'rock room vaults comes a clean soundboard recording of The Jeff Beck Group live in concert at Fillmore West 1968.The show is purported to be from the July 24th performance, but it is possible that could be from another night of the run. The band is positioned as the openers for "Moby Grape", as after the last number someone can be heard saying from the stage that Grape are coming up next. The recording is a well mixed, crisp board tape, and contains a strutting and confident performance by the quartet. Rod Stewart is in his illustrious early throat, and belts out all of the tunes with finesse and force. Ronnie Wood plays bass, like a bass player should, stringing thick notes made of rope underneath Beck's strutting riffing. Wood proves he is quite adept at playing the bass even though his popularity would stem from his guitar playing.. Drummer and long time Stewart player Mickey Waller plays a heavy footed but steady groove sympathetic to the virtuosos on display. Any admirer of Jeff Beck or The Faces owes to themselves to dig up this gold mine and sit back and enjoy the show. The recording I have is called "Morning Dew" and is from a silver CD bootleg release.

The show opens with the aggressive duo of "You Shook Me" segued into "Let Me Love You Baby", both songs featured on the Beck groups debut LP "Truth". "You Shook Me" is tailor made for the dueling musicianship of Stewart and Beck. Their guitar and vocal sparring is the blueprint to which one Jimmy Page would take to extravagant levels in Led Zeppelin with Robert Plant. The arrangement of "You Shook Me" is very similar to Led Zeppelin's eventual version, but with this performance containing a rolling break down mid song, which climbs to a substantial summit, topped by Beck's sonic shredding. Beck's playing is sharp and streamlined, a musical multicolored bullet streaking toward its eventual mark. The solo ends in a blue howl of a single note that coalesces into the funky strut of "Let Me Love You Baby".

Woody is thumping on a warm hollow log with a bass groove that makes you wanna curl your upper lip and stomp you foot. Beck and Stewart howl and shout back and forth, sharing the mic. Beck steps up to solo in a biting series of string bends that glow like hot embers embarking on a long slow burn. The tune deconstructs into a series of call and response moments between Beck, Stewart, and Wood snugly contained by Waller's steady thump. This is the definition of band interplay and a polished example of the tightness of the Beck line up. This is priceless stuff here, with Stewart and Beck knocking melodies back and forth over the net. The song detonates to a crashing conclusion, finished by Beck's final distorted guitar howls.

The next tune is introduced by Rod (I think) as having been written by "one of your own", before the group tip toes into Tim Rose's "Morning Dew". The Grateful Dead would eventually make this song their very own with several towering and definitive versions, but on this night the Beck Group play a "heavy" version of their own. Sung tenderly by Stewart, the tune as a certain foreboding charm, even if not as poignant as some Grateful Dead versions. The "Morning Dew" is well played, dynamic, and reaches a thunderous peak with Beck's distorted guitar strikes.

After a thought provoking "Morning Dew", the band swings into "Jeff's Boogie" just like a rock and roll band should. While this song is appropriately all about Beck, Waller and Woody both get some featured spotlight time. Beck asserts his diverse abilities with licks that range from soaring aircraft ,to cartoon soundtracks, and bluesy hoedowns. He even throws in a bit of the Yardbirds "Over Under Sideways Down" for good measure. After charging through metamorphosing rock themes for the first part of the song, at around four minutes Beck euphorically spins into a disorienting alien tone, slithering, it segues unconsciously into a hay fever inducing country lilt. Now things really take off with Beck shivering silver rain from his guitar, as he impressively illustrates why he is one of the greatest guitarists of all time. The band hits a double time jam at break neck speed that cooks like bacon in a pan. Breathlessly, Beck marches through speedy, dotted, honey coated notes that drip into the songs sweet conclusion. Amen.

"The Sun is Shining" marches in with its "Chicago Swing" introduction that then settles into a smokey bluesy mood. Beck solos over the rhythm section with a crisp clean tone that is emotionally elastic. His blues chops understanding and on point, he underpins Stewart's raspy growl with an invisible touch. Rolling watery filigrees escape from his fingers with mind numbing dexterity. Stewart's vocals foreshadow his future trademark vocal spotlights on songs such as "I'd Rather Go Blind". His voice is staggering for its strength and range. Beck's main solo is overdriven and quaking with kinetic vibratto. He hits a series of clenching top of the neck harmonic plucks that heighten the tension, making me squint. Again, Beck and Stewart cajole one another to greater heights by swapping ideas and licks at the conclusion of the number. Quietly, and not yet a star, Ronnie Wood stands in the shadows and lays down knotted notes underneath it all.

The final song on the recording, and I assume of the performance is the notorious "Hi Ho Silver Lining". A tune that Beck referred to as a "pink toilet seat" around his neck, because of its popularity, gets a solid enthusiastic reading here. The band stomps its way through the song professionally with Beck soloing through the songs pop melody flawlessly. The vocals are endearing but somewhat flat as Beck takes most of the duty. I'm sure the crowd was ecstatic as the band puts on a swinging topper to a unique and intense set of music.

In this era, the Jeff Beck Group was a breeding ground for not only Beck's creative visions, but for the musical expression of two other future rock legends. The "Morning Dew" recording captures them at a time where as a band ideas are being developed, identities solidified, and magic being created with instruments. It's also a testament to how influential The Jeff Beck Group was at this time, that many artists were influenced by their arrangements and repertoire. Though they would travel on different paths in the future, for a short time their collaboration reached lofty heights. 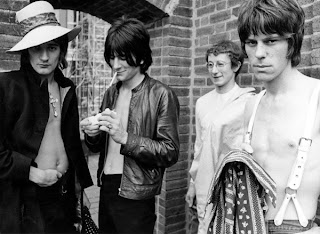 Let Me Love You Baby-Fillmore West 1968
Posted by talkfromtherockroom at 5:07 PM