Put The Boot In: -'Walking Through the Clouds' The Jimi Hendrix Experience-September 7, 1968 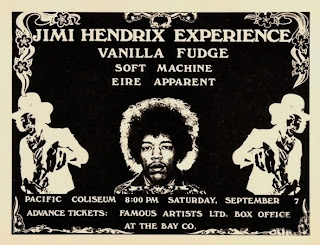 In the very recent past, the world of Jimi Hendrix bootlegs has been taken over by a flood of new live material, various concerts emerging from closets, basements and personal collections to be disseminated and devoured by the Hendrix faithful. This 'Talk From the Rock Room' will focus on a recently discovered concert tape made in Vancouver on September 7, 1968 that came into circulation over 45 years since its performance. The audience recording is a purported master, or at worst a first generation reel according to the lineage. There is a lot of on stage dialog captured by the recording that is easily discernible, as well as Redding's resonating bass and Mitch's snapping machine gun snare sounding quite audible and enjoyable. Jimi's guitar obviously comes through loud and clear,  like a silver bullet traveling through a crisp cold night. The high end is slightly squashed at some points, but really, I really have to search for faults with this recording , it is a magical experience to behold. Two final notes that deserve mention while listening to this recording, is than many of Hendrix's family members were in attendance for the performance as he mentions his grandmother (I believe his Father, Aunt, and Cousin were also there) and dedicates the 'show and everything' to his family. Finally, Jimi also mentions that he has a nasty cold toward the end of the show which must account for his decision to not play 'Sunshine Of Your Love', and conclude the concert with 'Purple Haze'.

The performance begins with Mitch and Jimi greeting the crowd and saying how nice it is to be in Canada. After tuning up the band begins with the still officially unreleased 'Voodoo Chile'. While not as expansive as future versions this rendition contains a alchemical enthusiasm. Jimi's first solo is a  sharp streaking star burning with tremolo bends that sometimes illicit the sounds of multiple guitars. Hearing this song for the first time in concert I'm sure was a mind altering experience for the crowd. When the jam is brought down in volume Redding's puffy bass is a 'fat mattress', fluffy, warm and enveloping. Mitchell's snare hits are crisp, and as a listener I am brought down the wormhole and placed into the Vancouver arena in the fall of 1968. 'Voodoo Chile' comes to a crashing conclusion, and Hendrix thanks the crowd humorously, 'for staying this long'. After an announcement by the MC for the crowd to 'sit down', Jimi introduces 'Hey Joe'.

'Hey Joe' is a textbook version of a tune the Experience played every night. Hendrix sings the song like it was a premier, and peels open his solo like a fresh juicy fruit. The crowd inundates the band with song requests after the crisp version, to which Hendrix replies, 'What are we slaves to the public?', and explains how long the band has been on the road, and that they are just 'trying to play and get themselves together'. After the verbal exchange the Experience dissolve into a unique feedback laden introduction for 'Are You Experienced'.

'Are You Experienced' is a hallucinatory reading with Hendrix's opening guitar melody similar to a mystical door opening, with Redding's guttural bass drone adding a touch of apprehension to the jam. Beautiful. Mitchell's military drums push the weightless rotating melody onward through the night. Hendrix's first solo starts with some feedback manipulation and by 3 and a half minutes Hendrix fire hoses the crowd with liquid psychedelia.  Mitch picks up the pace slightly, pounding the jam to another level,  and by 4 minutes Hendrix reaches out of the Earth's orbit and pulls a melody from the deep reaches of space back to his instrument, painting the sky with transparent rainbows. The song returns to the final verse and concludes on the fuzzy buzz of electronic mice. A powerful and inspiring version.

The next tune up is another unreleased song that would eventually end up on 'Electric Ladyland', 'Come On Part I'. Redding plays a simple pulse to which Hendrix initiates an ascending and descending exploration of his guitar neck nuances. Entering the song proper, the Experience detonates, and thrashes through the start and stop changes of the tune. The first solo segment features Hendrix soloing with a warm muted tone over Mitchell's schizophrenic drumming. Jimi builds on each run through the changes, and by his final lap he is sawing heavy logs with his impressive rhythm and has kicked on the wah wah for a build up of the tension. His final solo is a bit more over driven, and just as impressive, but ends quickly to conclude the song.

After an energetic and explosive opening to the show, Jimi brings the vibe down slightly with a gliding on the jet stream version of 'Little Wing'. A highlight in every show in which it is performed, 'Little Wing' is one of Hendrix's most enduring melodies with both Eric Clapton and Stevie Ray Vaughn releasing their own stellar versions of the song. All the instruments are audible and balanced on the recording, with special attention brought to Mitchell's skipping stone drumming. Short and oh so sweet, this 'Little Wing' fits perfect in the context of the set, and is a classic rendition dripping with emotional playing.

'Foxy Lady' comes next and is a track that was used as an opportunity for Jimi to let loose with his theatrics and to ignite some Stratocaster fireworks. Similarly to the prior songs, this version is as hot and sexy as its subject and showcases crowd pleasing guitar gymnastics.

A highlight of the performance and maybe of the tour is the version of 'Red House' that comes next. Jimi dedicates this blues to his family and proceeds to work his way through an extended guitar introduction to the song. From regal psychedelic prince to Delta blues man, Hendrix displays his versatility with a expressive clean tone intro, that becomes syrupy and as thick as the southern delta air. Each version of 'Red House' as unique as a fingerprint, containing the basic framework, but inside metamorphosing into an array of tones and shades emanating from Hendrix's guitar as he searches for diverse ways to express his deep feeling through his instrument. Redding and Mitchell are in the pocket, two ruts on a two track road, providing a foundation for Hendrix to travel on. Hendrix begins his first solo probing his standard blues changes for unique ways of expression. At a bit after six minutes Mitchell thrashes his kit signaling Hendrix to ignite into a incredulous display of why he is the greatest guitar player of all time. The band erupts, and at one point Hendrix reaches low on the neck and fans an arc of a colorful series of notes that defy explanation, changing shape, oozing from the wah-wah pedal, sharp, then muted, even on this field recording the riffs come through as mind expanding and chill inducing, I can only imagine what the crowd was experiencing with the concert amplification in full effect. Shortly after eight minutes the band cuts the cord on the expansive jam and drops into a quiet shuffle, Mitch's drums gallantly gallop with a multitude of rhythmic variations. Mitchell then falls out himself, letting Hendrix solo tenderly with a stretchy, husky tone. Pulling on notes slowly, Mitch rejoins quietly, letting Jimi lather on a series of juicy licks that lead to the last verse. With such a plethora of  legendary 'Red House' performances available, its hard to rank this one, but I can say that being a newly discovered version makes this one of my new favorites. (5/24-25/1969 are also contenders)

After a brief pause the Experience ignite a sultry version of 'Fire'. Again, Mitchell is the hero of this version with dancing, excitable drums that are as melodically pleasing as Hendrix's guitar playing. Noel lays down the R and B inspired start and stop bass notes and the group coagulates into an impressive portrayal (in spite some lyrical miscues) of one of their most high octane songs. Sweet.

A gigantic 'Spanish Castle Magic' follows with a stratospheric Hendrix guitar break. Jimi takes off above the band with a prismatic opening series of notes. While this version is not as extended as the later Winterland versions, Hendrix's two apocalyptic solos slither like electric snakes, twisting and turning, disappearing beneath the earth and then reappearing in a different form, heading for the deep blue unknown, hovering above the earth. After 'Spanish Castle Magic' Jimi explains to the crowd that 'This cold is killing me', and that the show will be somewhat truncated. He begins to introduce a version of 'Sunshine of Your Love', then changes his mind and says, 'Hell no, we're gonna do Purple Haze, good night'.

The 'Purple Haze' is unfortunately marred by some speed issues, and what sounds like the recording machine's batteries fading. Regardless, the version is a fitting show closer, and what is available is a crunchy journey through psychedelic fog with Hendrix's guitar the shining beacon directing the trip. The conclusion of the song cuts off just as Hendrix brings his guitar to a screaming shrill peak, but this is a small issue considering the rarity of this unearthed performance. Thus ends this amazing concert, thought to be lost to the mists of time, but now available to enjoy and include in rock collections everywhere. The Experience, psychedelic messengers, playing in 'Electric Churches' across the nation, captured for eternity.

For a 'rock geek' like myself, knowing there is still a steady stream of concert performances being unearthed is a indescribable thrill. These recordings can range from a cache of Lennon home demos unearthed a few years ago, to the Grateful Dead soundboards discovered just this year, to field recordings like the aforementioned, kept by enterprising tapers for decades, and now being shared with the public at large. These discoveries keep the artists music alive, and add to their already impressive catalogs with rarities that the hardcore fans welcome with open arms. This particular Jimi Hendrix Experience concert hails from a prime era for the group, and is another puzzle piece in completing a more definitive view of his career as a live performer. Thank you for taking the trip with me, now go check this one out! 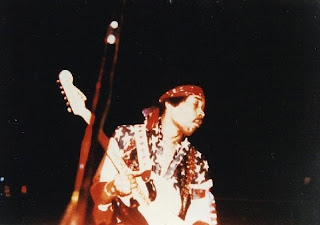 Posted by talkfromtherockroom at 11:06 AM