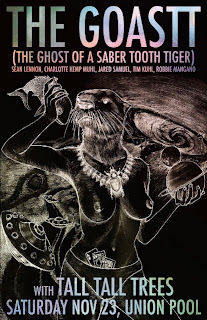 On November 23, 2013 Sean Lennon and Charlotte Kemp Muhl's expanded edition of the GOASTT played a melodic and multifaceted musical set at Brooklyn's intimate Union Pool.  A small but excitable crowd of 150 to 200 people sprinkled with respected musicians, as well as Lennon's Mother Yoko Ono were on hand to bear witness to a musical display brimming with originality and invention. Backed willingly and professionally by Brooklyn group the 'Invisible Familiars', featuring Jared Samuel, Tim Kuhl and Robbie Mangano the band conquered the Union Pool with psychedelic expressions, unique grooves and far out sounds. The group had been obviously road tested by their shows with Tame Impala and the Flaming Lips and were much tighter as a band than the fantastic show I had witnessed at the end of September in Kingston, NY. http://upstatelive.com/2013/10/09/conjuring-the-goastt-ghost-of-a-saber-tooth-tiger-live-at-the-bsp-lounge/ The group has become not only more aggressive in their approach, but more expansive in their instrumental coloring and communication, especially Lennon's anomalous guitar work.
The band appeared promptly on the diminutive crimson lit stage at 10:30 and immediately opened with a few well timed waves of rippling feedback breakers and Mellotron clouds, segueing nicely into an adrenaline infused 'Jardin du Luxembourg'. Following 'Jardin' the band continued without pause, blending seamlessly into a song off of their upcoming record, a nameless funky workout, irresistible, and solidly locked in place by the rhythm section of Muhl and Kuhl. Spectral and transparent harmonies delicately draped over the hard groove like a cozy winter coat, initiating a swirling musical contrast.
The set was similar to others on the tour, but with a shuffled order, the limited length due to the fact that the band is in the process of building their catalog. Two more new songs came in quick succession again spotlighting dreamy vocal blends and glistening metallic grooves. 'Xanadu' was cultivated into a mantra of flashing Super 8 images and a flexing rhythm encouraging even the most rigid of spectator to move in erotic time with the band. The band had their foot pressed firmly on the gas, there was no letdown in tempo or intensity.
The mid section of the set continued in much of the same impressive fashion, with the GOASTT revealing musical mysteries during their slow musical wade through thick seas of psychedelic jelly. Lennon's guitar prowess was on full display during 'Charlotte's Song(?)' a track thematically channeling South Africa through thumping tribal percussion and a majestic guitar exploration by Lennon. Charlotte's vocals sweet and warm, a welcoming whisper amidst the cacophony of instrumentation. 'Midnight Sun', loving referred to as 'Midninght Schlong' from the stage, wore a groove pinned on its chest that brought to mind the Harrison/Clapton classic 'Badge'. Mangano and Lennon collaborated on a shaky phased dual guitar line that shimmered under the fractal light from the gentle evening glow.
A long time highlight of GOASTT performances and a song that the last two times I have seen  the band has established itself as a centerpiece, followed with the dramatic 'Last Call'. The band rolls this one up into a tight circular package that swings between drama and hope, prefaced by a watery slide guitar introduction and highlighted by the quintessential GOASTT vocal blend. Everyone in the band looked lost in the music at some points, a genuine feeling of investment eminated from the stage.
The ten song set came to its quick and unfortunate conclusion with another as of yet unreleased song, this one dealing with the topic of Alien conspiracies, that again featured an immense guitar solo by Lennon, dual harmonies and a substantial heavy feedback conclusion. A disappearing into the dark horizon version of Syd Barrett's 'Long Gone' then ended the set, the band became smaller and smaller as they moved away, heading toward the pinched end of a flat earth. Some musical chairs occurred as Samuel moved to bass and Muhl to keyboards for this considerable and weighty reading. Deep, dark and edgy this version was a fitting ending to the show and a proper summation of the talents and abilities of the group.  These final songs appeared fully formed and blossomed from cracks in the frigid Brooklyn streets, defeating the concrete, becoming alive with leafy green stalks, supporting multicolored and panoramic musical heads, their aroma rich in musical statements and organic creation.
I find it a pleasure to watch Lennon kick off the shoes of his past and manifest the GOASTT into a tangible performing creation worthy of inspection and respect. With the music able to take its own natural course it feels to me Lennon has found his identity, free from the obvious historical connections that may or may have not stunted his previous artistic growth. The GOASTT will be releasing their new music next year, to the anticipation of this writer and many others. The band is experimenting and finding the alchemy needed to create magic, the pleasure is found in witnessing the journey and reaping the aural results. 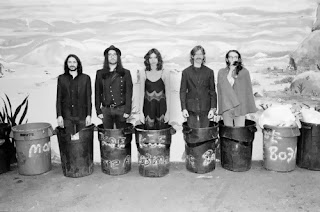 Posted by talkfromtherockroom at 8:22 AM