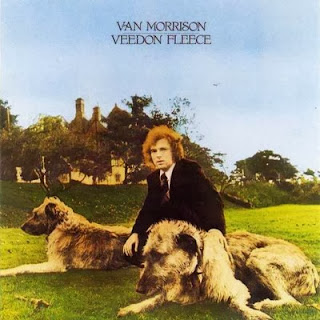 There are a slew of superlatives that can be used to describe Van Morrison's 1974 LP Veedon Fleece. Hardcore fans of Van the Man know the album well, it's moodiness, it improvised grooves, the relentlessness of Van's soulful vocals. The album comes at a time when Van was reinventing his musical presentation, going through a divorce, traveling, as well as writing some of his most affecting melodies. The record reminds me emotionally and in some ways musically to Dylan's own soul bearing 1974 LP Blood on the Tracks. Both records subscribing to the theory that 'pain' sometimes creates the best art. Morrison's recording sounds if created by an ancient Celtic troubadour, with sound as spacious as an open horizon, loose, alive with breath. The album not only analyzes Morrison's emotional status, but is a reexamination of his Celtic roots. Today in the 'rock room' I am spinning Veedon Fleece on a cool fall afternoon, sun bleeding through trees, the evening slinking in. The music fits the scene, a warm wool covering to keep out the chill.

The LP opens with 'Fair Play' like a weather worn wooden door slowly opening, its matted moss and tangled vines parting to reveal the crystal waters of Killarney's blue lakes. Intimate instrumentation skips on light brushes and cozy descending guitar lines. The glorious horn that is Morrison's vocal attack, sings a montage of scattered shots from his consciousness. Syncopated vocal images ricochet off of the expertly arranged and courteous band. A magnificent opener and mood maker, 'Fair Play to you Van', the song is one of his finest moments.

'Linden Arden Stole the Highlights' begins with the gentle duo of piano and guitar weaving the introduction to Morrison's tale of toughness, attitude, and responsibility. As the strings stir, Morrison's vocals soar to the summit, to the place where only his voice can reach the note. Stunning. A brief pause and 'Who Was That Masked Man' enters, a decedent of Linden Arden, moving slowly, coming closer, with Van's comforting falsetto taking center stage. His exclamations answered by rain water clear acoustic guitar replies, and wine class piano taps. The tone definition of the stand up bass on this vinyl is likened to a big warm plush fuzzy ball, ticklish, defined.

The shady introduction to 'Streets of Arkow' begins the slow dark march down moist cobblestone streets, hearts on fire. The flute over Van's vocals creates its own melody line that ascends high above Van's narrative. The music is slightly dim, then turns dramatic as strings enter, initiating a call and response conversation including the piano, and flute. The song then peaks, increasing in dynamic attitude, swelling organically, rolling to a gentle stop. A mature song fully realized and excitedly intense.

What I would call the 'centerpiece' of the record comes next, this song being the sun in which all the other songs orbit around. 'You Don't Pull No Punches, but You Don't Push The River', is a cinematic ride on a roller coaster of clouds. The song rolls over on top of itself constantly changing, feeling frisky, locked in a loose jazzy groove. The music sensually pulses with every change in Van's vocal approach.  The stripped down band undulates relentlessly on this developed jazzy mantra, Van directs the approach vocally, as the strings enter coloring between the lines created by the the woody groove. The Veedon Fleece is name checked in this song, referred to as something Van is constantly looking for. 'Punches' rolls on for over nine minutes, finally cascading into a gentle eddy, slowing to a conclusion and ending side one. One for the books, an absolute all timer, and we are only half way through.

Side two opens with the pastoral imagery and 'Celtic Country' of 'Bulbs'. It must be said if you can pick up any of the live versions of this track from Van's 1974 tour, I promise it will fulfill all of your musical desires. I digress, the studio version of "Bulbs' breaks dirt and blossoms into striding and beautiful version worthy of repeated listening. If you love Van, you know this one well.

The slow turn around of another timeless song residing on Veedon Fleece follows with the moody mid tempo 'Cul de Sac. You will be hard pressed to find another vocal performance that compares to this one. Grunts, growls, horn wails, icy smooth deliveries, and soulful screams, this one has em all. The rhythm section is so in the pocket they sound related. Soul music. The twisted call and response guitar and vocal climax the makes up the extended outro is where its at. Van the man, machine gun scat, barking commands. Dig it.

After the heavy experience that is 'Cul de Sac', 'Comfort You' is a tender come down. Morrsion's plea to be the 'rock', and offering himself up to the lady of the song is set to a transparent waltz. The back porch serenade becomes something bigger as understated strings drizzle sweetness over the acoustic instruments. The song, similar to previous tunes of the LP, builds and drops nicely, breathing organically. The strings ring, the piano is a blue bell, restrained, yet virtuosic.

'Come Her My Love' is a fitting follow up, it feels like one piece with the previous, both songs decorated with delicate wooden instruments. 'Come Here' is a stark acoustic guitar and vocal performance, reminding me of Neil Young's 'Will to Love' in atmosphere. Van sweetly sings of showing his love the way to escape through the wonder of nature, accompanied by crisp finger-picked acoustic backing. This is candle light music here, no doubt about it.

The record concludes with the enchanted unveiling of 'Country Fair'. A song of innocence, a song of remembrance, a song that I will admit moves me deeply when I hear it. The song hangs weightless, a thin clean cotton sheet, windblown, rising and falling on the line. The melody developed by Van is the only sturdy thing amidst the swaying instrumentation made up of swirling and brilliant musical particulates, coming together for moments, then drifting apart. Containing acoustic guitar, flute and bass for form, the lyrics are a pale water painting, expressing worlds of emotions through simple images, and then reveling other views of those worlds through the movement of the music and through every detailed edge of Morrison's voice. These are the times I struggle to adequately describe what I hear, and wish for a deeper sense of expressing what this song is. But such is the greatness of music, and why we love it, and probably why you are reading this article. It's impossible to properly verbalize the magic we hear, but it sure is fun to try.

Van Morrison's Veedon Fleece is only one small segment in a long and varied career brimming with amazing moments. I can tell you it's my favorite Van record...obviously, but what is amazing to me, is that the record often goes unnoticed and upraised in grand scheme of Van's career (even by Van). In previous rants on this page I believe I have discussed that certain type of record, that has to be played in its entirety, and has to be played at the right moment for full enjoyment. This is one of those records. When played the LP takes on a life of its own, containing transportational qualities engrained in its grooves.  For those who need it now, I have included some gold in the links below. As always, thanks for reading. 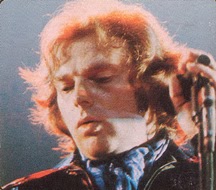 Posted by talkfromtherockroom at 1:34 PM