Put the Boot In: The Jimi Hendrix Experience -'Thank You, Peace and Happiness' May 25, 1969 Northern California Folk Rock Festival 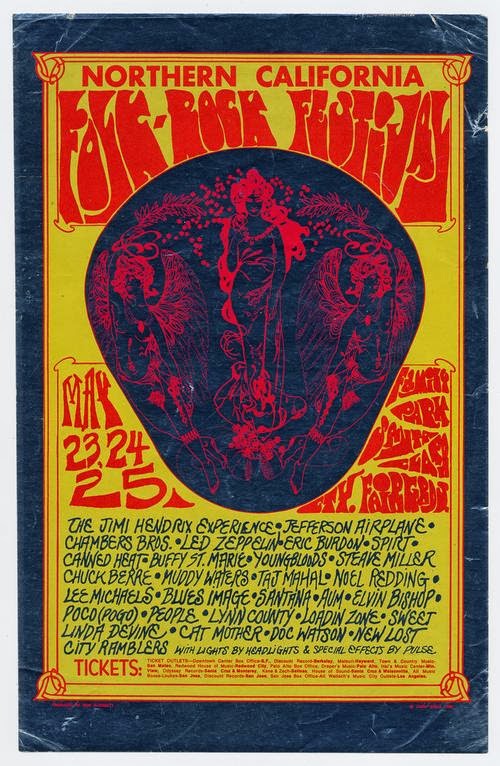 The final week of May 1969 found the Jimi Hendrix Experience embarking on a four show tour of the West,  the stint taking place in between studio recording sessions as well as the mixing of current live recordings. The subject of this edition of ‘Put the Boot In’ will focus on a field recording captured from this tour at the Northern California Folk Rock Pop Festival on May 25th, 1969. The three day festival was held on May 23rd through the 25th, 1969 and featured a formidable line up including but limited to, Jefferson Airplane, Canned Head, Led Zeppelin, Santana, Taj Mahal and the Chamber Brothers. The Experience’s headlining set is heavy and hard, coming only a day after their famed May 24th performance in San Diego immortalized on the now out of print Stages box set.

The circulating tape I am enjoying is a second generation audience capture that while having a bit of wow and flutter is otherwise a well balanced and serrated sonic edge of prime Hendrix. The particular recording is titled Do You Know the Way? and was released on the fan made ATM label specializing in Hendrix live releases. The top end of the tape is a bit flat, but the nice balance of the instruments more than makes up for any short comings. Once you get into it, it’s easy to tune in.

The taper begins the recording just as Hendrix invites the crowd to ‘create their own little world’ followed by some scattered tuning by the band. Hendrix then proceeds to touch off an opening solo space segment that then segues into the country blues jump of ‘Hear My Train a Comin’. In true cosmic blues man fashion Hendrix introduces the tale, calmly conversing with the audience, his vocals are a bit distant, his guitar is virgin diamond clear. Peace pipes are being passed in the crowd; the warm Spring sun is beating on Jimi’s face as he shreds his beloved white Stratocaster, regal and resplendent in velvet blue pants.

The first solo beats feet to the station as the hum of the rails and quake of the earth initiates Hendrix’s string story telling. Redding and Mitchell rumble relentlessly, Hendrix quotes a riff that will soon become central in ‘Machine Gun’ before wailing and clawing at the upper reaches of his guitar neck. A bit after five minutes the runaway locomotive slows, Mitchell locks in low. Hendrix enters with a plush muted clean tone, ticklish, it quotes fairy tales and tosses flowers.

Hendrix eventually comes back and buys the town he left behind for the final recitation of the verse. Hendrix then exposes the battered soul of the song with a violent wah-wah’d explosion that bursts like paint cans dropped from a roof top.. Awe inspiring, Mitchell runs for the boxcar door as the train rockets off, joining Hendrix just in time for a kaleidoscopic wash of thrilling sound. The crowd screams with delight as the song crashes into a call and response Hendrix and guitar conclusion. The opening number proof of the type of performance this is destined to be. 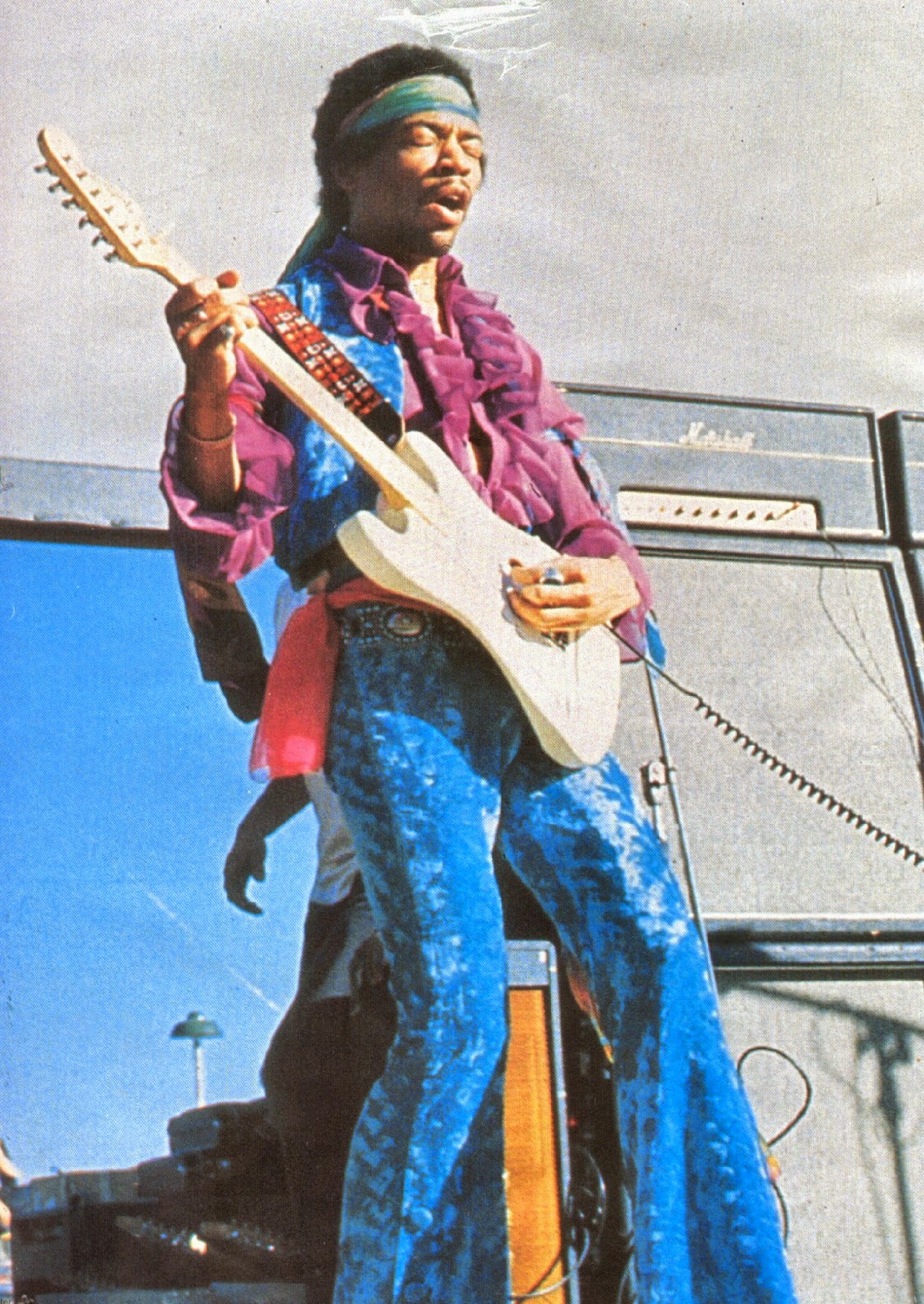 'Fire’ follows at a expeditious speed, almost unable to contain itself. Hendrix fumbles with the lyrics and makes up for it by embarking on a unique solo excursion that soon leaves the shores of ‘Fire’ behind and becomes a far out improvised segment full of  breathtaking moments never to be heard again. Mid solo, Hendrix builds a series of changes from scratch, looking for smoke, initiating flame and causing the Experience to elicit the monstrous strumming changes of the Who! Stunning soloing that comes in waves occurs before Hendrix directs the band back to the song proper. According to the talk in the crowd the microphone had failed, which is confirmed by Redding's ‘1-2’ replies into the mic following the song. At least it caused some extra jamming to take place! Regardless, Mitchell takes the opportunity to introduce a banging and extended drum solo to which Hendrix returns to scribble the ‘Spanish Castle Magic’ melody over the top of seamlessly.

‘Spanish Castle Magic’ in the ‘rock room’s humble opinion is a BOAT version. Kinetic drumming by Mitchell drives Hendrix’s distinctly ‘rock and roll’ riffing to extending and experimental levels. Mitchell and Hendrix weld together for stated poly rhythms and brief melodic quotes. Hendrix, similar to the preceding ‘Fire’, captures a fluttering melody a quotes it dramatically, creating in the moment and developing on the spot. The middle of the song hovers magically. He uses the constructed statements to spring back into ‘Spanish Castle’ theme to the amazed delight of a female attendee who squeals with satisfaction at the staggering sonic display.

Someone from the crowd yells, ‘Break Out!', before Jimi introduces a fully mature, man child version of ‘Red House’. The previous evening’s version in San Diego is considered one of the finest and this version will quench the thirst of any hardcore fan of the track. After the preceding super nova of sound Hendrix takes it nice and slow, teasing the crowd playfully. Filigrees of sparkling blues coat the introduction, followed by collected ‘oooh’s and aaahs’ from the audience. Jimi coaxes every squeal of feedback, sharpens the tip of every string bend and inflates the volume of every swell carefully with immaculate attention to detail. The solo break swoops in, gaining volume before the restraint is permanently shed. Hendrix slashes down everything in his path with a quaking overdriven gain, Mitchell rolls stones downhill and Redding follows with deft descending and ascending 12 bar riffing.  Hendrix bends steely strings out of shape, just when you think he’s taken the jam as far as it can go, he smashes another door, collects a new approach and raises the stakes even higher.

The band enters the familiar jazzy break down post solo, Jimi slaps and claws at muted strings and Mitchell scats like a  hummingbird across the kit. Hendrix takes a brief drumless solo spot, milking thick oozing notes in the spotlight before orchestrating a glorious return to the final verse and conclusion. Wow. 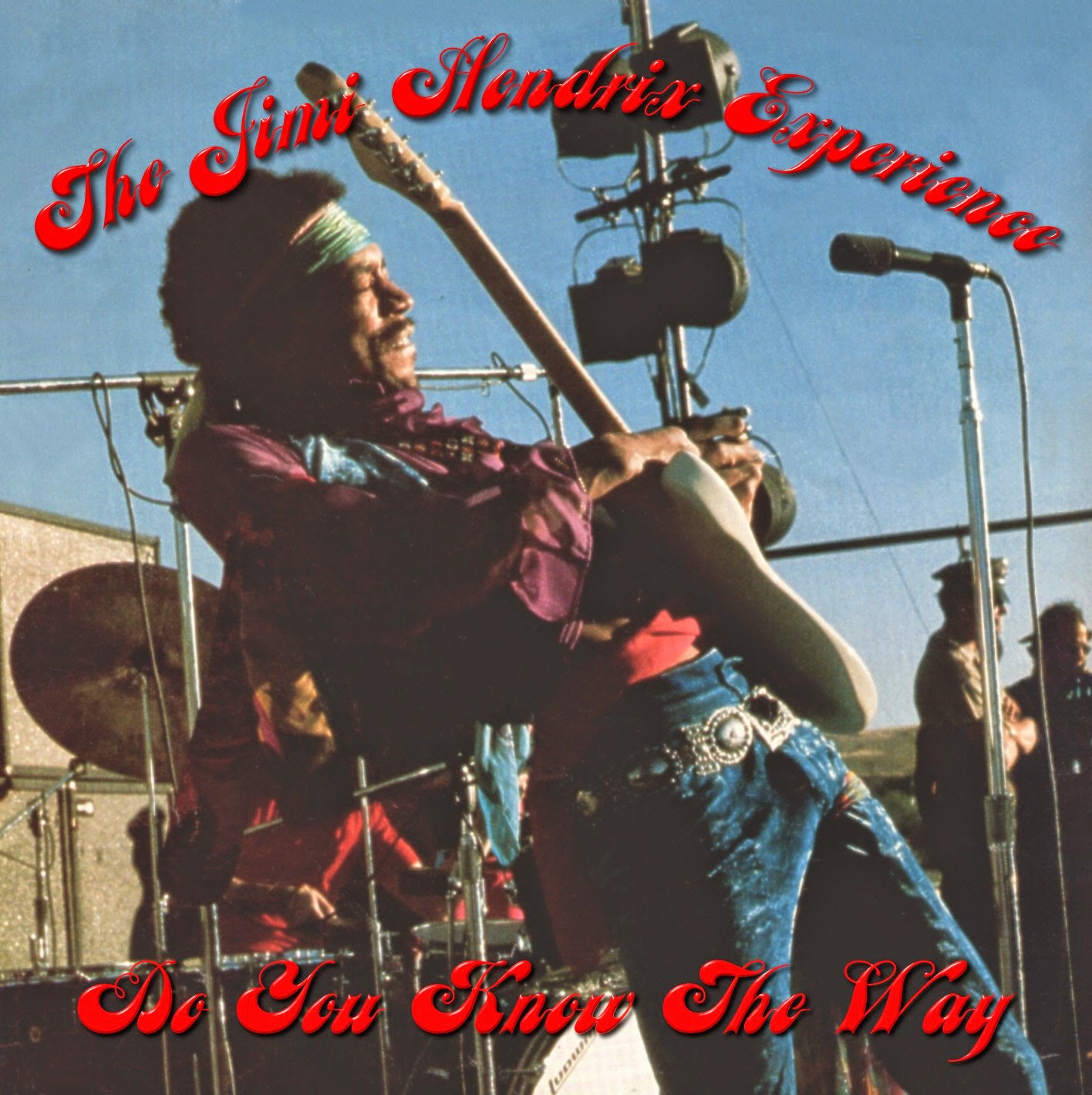 Dedicated to the American Indian, a track from the Experience’s debut LP follows with ‘I Don’t Live Today’. A highlight of numerous Experience concerts, Mitchell impacts the drums with a tribal attack setting the stage for another possible candidate for a ‘best of’ version. Things become significantly bizarre for the mid section of the performance. The band rattles chains as Hendrix dips his fingers into his wizardry satchel fingering unknown alien sounds and conjuring the purest undiluted psychedelics, straight from the tap. Amidst this Indian rope trick riffing the band rejoins and institutes a high speed collaboration rooted in Redding’s earthy undercurrent that races to the songs conclusion.

Jimi dedicates ‘Foxy Lady’ to the ‘girl back there in the yellow underwear’ and while overplayed, like every song from this concert there is an added element of danger that take the tracks to the next level. A hot to trot solo comes up from behind with a goose while moving exquisitely through another extended jam that finally falls perfectly into a quaking 'Purple Haze’. ‘Haze’ pleases the crowd and Hendrix as it’s played in a slightly truncated version but full of attitude.

After 'Foxy Lady' Hendrix approaches the microphone to tell the crowd that the next song will be their final for the evening to the audience's great disappointment. Responding to crowd requests, Jimi replies, ‘I ‘know exactly what I’m going to do’. What follows is an extended 20 minute journey into ‘Voodoo Child (Slight Return)’ that destroys the surrounding mountains, then explores the many faces of multiple unknown surrounding moons named ‘Message to Love, Room Full of Mirrors’ and ‘Sunshine of Your Love’ before returning to the ‘Voodoo Child’ reprise.

Following the first segment of ‘Voodoo Child’ a funky string slapping interlude develops into a unique flexing Hendrix improv that then returns to verse two. After more extended jamming, Hendrix locks into the ‘Message to Love’ lick and gives it nice workout before Mitchell and Redding get the hint and join the class. Low key and slightly tentative a cool little groove develops. The music springs to live naturally, each principal flexing their musical muscles. Hendrix steps to the mic and says ‘We’re finished now, we’re just jammin’ as the band continues to thump along. Hendrix then begins to sing the lyrics to the unreleased ‘Room Full of Mirrors’, again developing into a unplanned and unique performance. This particular reading gets an uptempo strummed approach before Hendrix realizes the momentum is being lost and he strikes the introduction to ‘Sunshine of Your Love’. ‘Sunshine’ is given an enthusiastic and kinetic run through before disintegrating into a substantially impressive concluding jam that eventually gently nestles into the final slow quote of the ‘Voodoo Child’ theme. The entirety of this show closing jam is packed with loose playing, unique passages and ace band interactions.

Perhaps the most enjoyable part of this show segment is this return to ‘Voodoo Child’ and the final Hendrix quotes on the theme. Hendrix plays with the introductory melody, brushing by it, jumping up to touch it and elasticizing the lick. The crowd gets the joke and laughs along, chuckling and making humorous asides. Performer and audience are meeting in exactly the same place. The excitement and camaraderie is tangible on the recording. Thus ends this historic and stoic concert and recording.

Obviously the superlatives are endless when describing Jimi Hendrix and the Experience as well as their appearances in the 'Electric Church'. Their influence and reach is endless, their famous tales to many to tell. It’s a pleasure and a surprise when a recording can be found that not only reinforces the obvious about Hendrix but reveals unique aspects, special instrumentals and the genesis of well known songs. The Experience would be no more by the conclusion of the year 1969, but during their final days were still capable of creating unbelievable music and performing stunning concerts.

May 25, 1969 Northern California Folk Rock Fest (Entire Show)
Posted by talkfromtherockroom at 6:41 AM