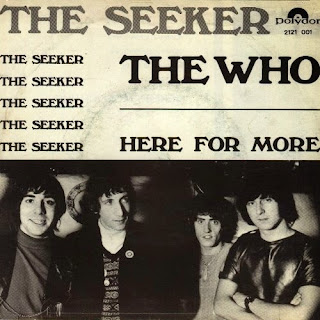 In this edition of the ‘rock room’s ‘Take One’ feature we examine a Who single well known by hardcore fans but often lost in the plentiful jambalaya of magical music created by the group. The tune of ‘The Seeker’ can be discovered nestled in the high plateau that lies between the summits of 1969’s Tommy LP and 1971’s Who’s Next. The band recorded the single during a brief respite from the critical acclaim and madness initiated by the success Tommy in early 1970.

Townshend referred to the songs meaning as ‘glorifying the ordinary man in the street’ as well as a statement of ‘divine desperation’. Townshend also revealed to Al Clark according to, The Complete Chronicle of the Who, Anyway Anyhow Anywhere 1958-1978 in regards to the track that , ‘It was meant to bridge the gap between the old Who sound and the new Who sound’ and that he was ‘a bit disappointed’ in the result. Songs recorded around the same time period that never found a proper place on a Who LP include ‘Water’, ‘I Don’t Even Know Myself’ and ‘Naked Eye’. Townshend was locked into a period of great creativity and it’s no surprise that many amazing compositions were shuffled around and/or displaced from having spotlight slots on albums.

The single of 'The Seeker' was recorded in January and released in March of 1970 in the UK and April in the US backed with the rare Roger Daltrey composition ‘Here for More’. The song was developed from a Townshend demo tape and bashed into shape by the band. The single levitated around the top 20 in the UK and settled for even less in the US, never really gaining any traction as far as commercial success. The single would later appear on the 1971 mish-mash compilation LP Meaty Beaty Big and Bouncy which collected singles and non-album Who tracks.

The song investigates the fractured psyche of Townshend as well as the songs narrator. It not only poses questions of existence internally but also externally to the so called messengers of the era, (Dylan, Beatles) and to Townshend himself. Drugs and Timothy Leary are also taken to task as Townshend reiterates that he’s looked everywhere for divine directives and that the people or products purported to have the answers are illusions themselves. A series of dead ends exist for the narrator whether in music literature, hallucinogens or even in his own mind.

The song reveals itself with a rich and rippling leaden Pete Townshend guitar line to open.The texture of the lick as gentle as a wire brush. The elements of previous musical glories such as ‘I Can’t Explain’ and ‘Substitute’ are legible in the melodic wood grains of the central riff. Moon and Entwistle enter like a bar room brawl and the song develops into an adamant melodic statement of questioning and aggressive searching for God and answers. Entwistle is unfortunately hidden in the mix which could be a result of the Who producing this track on their own for the first time in Kit Lambert’s absence. 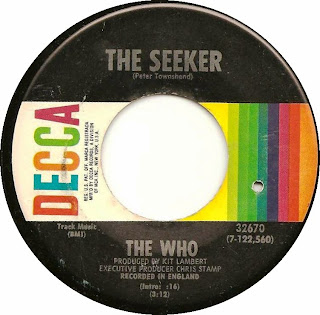 The groove of ‘The Seeker’ is comprised of heavy doors slamming, tables being overturned, glasses being thrown and rooms being ransacked. The song elicits a psychological game of hide and go seek in the recesses of one’s own mind.  Daltrey’s earnest and slightly menacing vocal approach reflects the seriousness of the narrator’s predicament, his falsetto adornments are also critical in the shaky development of the track’s tale. The syncopated starting and stopping of the propulsive rhythm also draws the listener’s ears to specific and profound lyrical statements.

The answers that the narrator is seeking will not and cannot be found until they are no longer of this earth. The truth expressed in the lyrics is that only the freedom of death will offer the clandestine answers that the post -'Tommy' character longs to understand so much.

The middle eight of ‘The Seeker’ appears and is highlighted by Townshend’s overdubbed roly-poly piano that rings in the back ground like a phone in an empty home. The solo begins and sits in a comfortable contrast to the rest of the arrangement as Townshend scrubs a frothing series of acoustic scratching that almost feels triumphant and contradictory to the rest of the music. 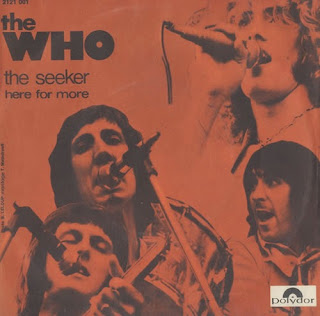 During the lines that follow the acoustic solo segment, “I’m looking for me, you’re looking for you, we’re looking in at each other and we don’t know what to do’, Townshend lends a desperate creaking high harmony to Daltrey’s hearty vocal lines desperately increasing the songs intensity. The perfectly placed dual vocals also lend the song a reminder that we are all in this together and while the narrator is the seeker, we are all on a journey looking for the elusive ‘something’ ourselves.

Perfectly packaged in a tightly wrapped three and a half minute rock and roll ball, ‘The Seeker’ is everything Townshend envisioned for it. The song was unfortunately released into dead air when everyone’s heads were turned the other way looking at ‘Tommy’ in the sky. Now, its deep content and quintessential Who arrangement can be properly appreciated for what it is. An awesome and deep heavy duty rock cut with a thinking man's lyrics and a brutes attitude. 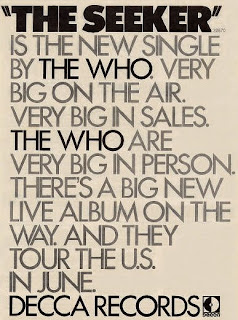 While ‘The Seeker’ had issues being appreciated publicly at the time, in intervening years the flowing hourglass has been kind. The track was only played briefly by the original Who lineup for a handful of performances shortly following its release. Now, (starting in 2006) the song is slotted consistently in ‘Who’ set lists and has left its ‘deep track’ status behind. Cover versions by ‘Rush’, ‘The Black Crowes’ and ‘The Raconteurs’ have kept the tune relevant and available to current musical seekers. During its genesis, ‘The Seeker’ may have paled in comparison to its nearby musical compositional relatives. Now, examined with the vision of hindsight, the song can be seen for what it is. A stellar Townshend creation captured from when the Who were experiencing their composing, recording and performing peak as a band.

The Seeker Promotional Video
Posted by talkfromtherockroom at 7:06 AM

Email ThisBlogThis!Share to TwitterShare to FacebookShare to Pinterest
Labels: 1970, Lambert, Moon, rock room, single, talk from the rock room, The Seeker, The Who, Tommy, Townshend, Who's Next