Put the Boot In: Janis Joplin and the Full Tilt Boogie Band - Honolulu, Hawaii 1970 'Let's Not Forget What Rockin' Means' 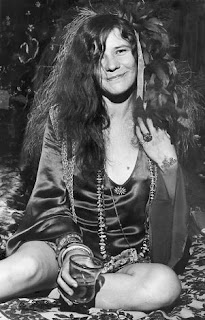 Spinning in the 'rock room' today is a true original. Released after Joplin's death in 1970 by legendary bootleg producers Trademark of Quality, a yellow colored vinyl Get It While You Can immortalized Janis Joplin and the Full Tilt Boogie Band's 1970 performance at the Honolulu International Center Arena for an assembled crowd of 7,000+. The direct and very raw soundboard recording captures the entirety of Joplin's hour long set in surprisingly good sonic quality. The recording also captures a crazed crowd and much of the onstage discussions and song choice decisions that are called out by Joplin.

The recording I am enjoying is a transfer from the aforementioned original LP release. There are a few minor mix issues and anomalies but nothing that detracts from this special capture. Janis is feeling no pain and is obviously a bit fuzzy around the edges but performs admirably and is laid way back and not looking at the clock in any way. She chats with the crowd, kids with band members and puts on a wonderful late era performance. This recording a classic in every way, from the performance to pirated production. 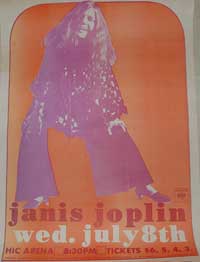 The concert begins after the MC's introduction with a typical for the era, which means an excitable and sensual reading of 'Tell Mama'. The 'Full Tilt Boogie Band' which Janis referred to as her band opens it up with a mid song John Till guitar solo that pours out of the PA like molten lava racing for the sea. Janis brings down the groove and while squinting through the steam enters into her 'rap'. Beginning a sweet call and response section Janis reminds the 'rock room' of Presley during the same era. She is in complete control of the band and acts as a baton swinging R and B princess directing the groove.

After the conclusion of 'Tell Mama' some banging from the stage can be heard on the tape as Joplin tells the crowd that she and the band came for one reason and that is to rock. Joplin calls out for 'Half Moon' a song that would appear on Joplin's posthumous release, Pearl. A musical hero of the performance, Richard Bell on piano is stunning during this rendition. Bell, for those not aware was a  the 'Revols' from Stratford, Ontario which also featured Richard Manuel of 'The Band'. The quivering guitar now gets funky and follows the big splashing cymbals in to the song proper. Classic big band Joplin. Janis pushes off from the safety of shore and gets it on. Till's first solo flies low almost banging tree tops setting the stage for the plethora of string acrobatics to follow. Joplin responds with hearty wines that syncopate with the high tempo rim shots. The song starts to dissolve into dusk with Joplin wailing to the sky before reaching a starry silence and concluding in a big way.

The concert continues in this breathless fashion as the Joplin penned 'Move Over' follows. The track would later appear on Janis's last album Pearl as the opening song. Beginning a gunshot snare from drummer Clark Pierson with a Joplin cry of 'Get it on' the song slams into the venue's shared seating bumping anyone close by to the floor. Till's steel wool guitar duets with Joplin through the verses. Joplin encourages the increasingly rowdy crowd to singalong. Relentlessly 'Move Over' churns from the stage while Joplin plaintively pleads for her man to stop playing with her and to just move on with it. The band shifts for the solo segment and digs in for the most intense musical movement of the evening thus far. While not breaking down the barriers of the song Janis shows great control, patience and presence while touching the edges of orgasm. She howls with eyes closed ecstasy' while still keeping the tension from breaching the musical framework. Stunning. 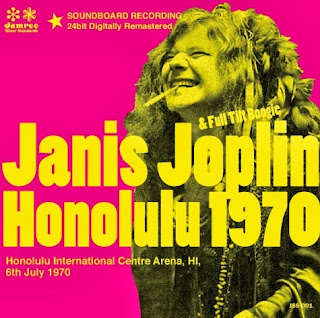 Following the accelerated R and B and euphoric vibe that has just occurred since the opener, the band takes some time to deal with some guitar issues and technical problems. The tape revels some classic stage banter that I will leave for you my treasured listener to discover. The band tosses out various tuning quotes including 'Tequila' before  the thick breaking into the gooey sweet center of the concert.

The 'soul' set of the concert begins here.The band enters into a cover of  'Maybe' originally performed by the 'Chantels' in 1958.  Highlighted by dramatic organ flourishes by Ken Pearson the song is stamped with stuttering drums and well times caesura's. Joplin's vocals are sweet Southern Comfort and swirl around the arrangement like the last thick swig in a bar glass.

'Summertime' starts in the same tractor tracks of 'Maybe', except its arrangement is floral and as vibrant as diffused sunlight. The song though only two years removed seems like ages because of Joplin's brisk maturity and constant artistic flux. Full Tilt channels Big Brother but in a tighter wrapping here as 'Summertime' plays from a psychedelic music box. Joplin is again in fine form directing the band up and over and under and around as 'Summertime' gets a heavy response from the crowd. 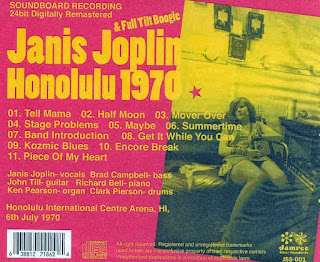 Joplin then takes the opportunity to introduce her band of 'Canadians'. The only American in the band being drummer Clark Pierson.There again follows some prime dialog from the stage here as Janis invites someone in the crowd to 'Pearl's House' for drinks if they can make it. Again, I'll leave it to the listener to enjoy these audio verite' moments of Joplin. There is no doubt that Joplin is nipping good as the show continues into the evening.

Introduced as a 'kind of a new song', One of Joplin's signature cuts, 'Get It While You Can' becomes the centerpiece of the elegant place setting of music developed by the performance. The track illustrates Joplin's range and soul in a sympathetic arrangement. While not an 'all time' reading, this version stays true to the good time, easy vibe of the show. Bell's saloon piano and the slow steady rhythmic sway support Joplin's breathy verses. Prime Janis. 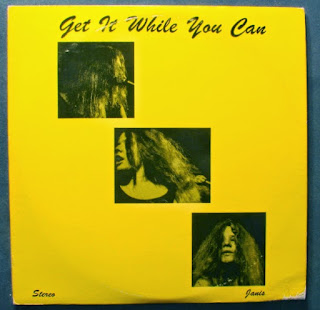 Closing the main set is a dynamic version of 'Kozmic Blues', a song from the 1969 LP I Got Dem Ol' Kozmic Blues Again Mama!. The song starts low and ends high becoming a triumphant detonation of sound by its conclusion. The band corners with Joplin for every tight turn. Janis initiates a sing along throughout her series of falsetto exclamations, the whips the crowd into a frenzy documented by the recording. Perfectly placed and paced the performance ends confidently and stunningly.

The MC returns and tries to contain the crowd while controlling his own excitement. You can tell that something is going down in the auditorium from the audio evidence, but I cannot confirm what. Joplin and the band return in response to the crowds calls and unidentified chaos to which Janis says, 'Figure out what it costs and I'll pay for it'. She then calls for 'Piece of My Heart' which is played in a uptempo but somewhat tired fashion. I think Janis is feeling really good at this point of the show. The oft played but mega popular song gives the crowd even greater reason to celebrate and at its conclusion the response is tangible. The MC explains Janis and the band have left as the crowd screams for more.

Janis Joplin's classic performance and bootleg recording from Honolulu 1970 has made the rounds for years and rightfully so. While arguably not the 'best' Joplin performance available, its charm is in the edgy vibe, the honest unadorned soundboard mix, the insane crowd and Janis's awesome vocals and raps. The recording is a rock time capsule trapped in the grooves of the original yellow vinyl release, released by enterprising collectors and passed on for eternity for rock fans like all of us. Janis would not be long for the earth after these Summer 1970 concerts, throw this recording on to find her performing like there is no tomorrow.

Posted by talkfromtherockroom at 10:41 AM

Email ThisBlogThis!Share to TwitterShare to FacebookShare to Pinterest
Labels: 'rock room, 1970, Big Brother and the Holding Company, bootleg, Full Tilt Boogie Band, Get it while you can, Janis Joplin, live, Pearl, talk from the rock room, TMQ, vinyl, yellow vinyl