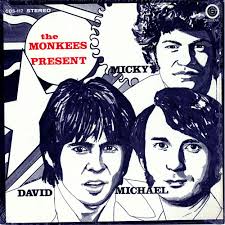 In light of the recent resurgence and renewed interest in the Monkees' and because I dig em, today I am spinning what would be in reality their swan song record, The Monkees Present. Released in October 1969 the recording finds the band in some opinion somewhat outdated and passé at this point in their career. But when inspected in hindsight and context the record features for the time, contemporary as well as very interesting music. Peter Tork had left the group of his own accord in late 1968 while Michael Nesmith, Micky Dolenz and David Jones decided to soldier on, with Nesmith soon leaving the group after the release of this aforementioned record.

The original intention of The Monkees Present was to spotlight a side of the record for each individual member of group; but with Nesmith’s interest waning and the band’s supporters losing interest, the record ended up being released as a normal collection in its current and circulating form. The record as a whole is interesting for each member’s original compositions as well as its diverse array of genre and collective musicianship. One gets the feeling the Mike Nesmith was holding back his best work for his First National Band project which would be the culmination of Nesmith’s suppressed and simmering musical abilities and his debut solo project released ion the following year. Regardless, the Monkees Present paints a realistic and aurally interesting document of the Monkees, an often controversial and criticized group among rock fans, but with no doubt, a talented assembly of musical and artistic expressionists.

Dolenz ‘show-biz psychedelia elements, Jones heart break voice and stage presence and Nesmith’s revolutionary country rock song skills collaborate to express why the Monkees regardless of their genesis were greater than the sum of their parts. They all respectively knew exactly what they were good at and used these abilities to create a catalog of work worth of inspection. The grooves of this record are bumpy, but moments both good and bad are still worthy of taking note.

The needle drops on the first side of the record revealing a Micky Dolenz original ‘Little Girl’. A small three piece group of studio musicians support the dreamy jazz like structure. Dolenz rhythmic lyrical approach to songwriting pulses through a series of pleadings supported by airy guitar trilling. In my opinion the following song, Nesmith’s ‘Good Clean Fun’s would have been an even better opening number, but its honky-tonk aesthetic must not have meshed with certain record company criteria. “Little Girl’ does the job admirably and is the first of a series of great Dolenz tracks. 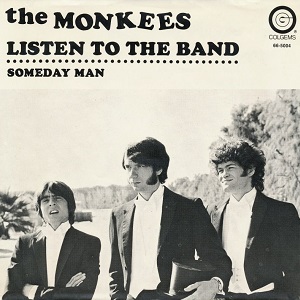 The follow up number on the first side is also the LP’s single, Nesmith’s ‘Good Clean Fun’. The unabashedly ‘country’ number, is a standout song. The tune did not make much of an impression on the record buying public, but does reveal the forward thinking Nesmith pushing the ‘country rock’ genre that he helped create and popularize. Unfortunately Nesmith was per usual, too ahead of the curve musically as well as trying to sell a genre that the Monkees fan base was not wholly a proponent of.  The track is catchy, hot and has its beginnings hailing from Nesmith’s groundbreaking 1968 Nashville recording sessions. (Which as a side note are in desperate need of a complete official release) Ticklish banjo and pedal steel abound and Nesmith drops musical clues as to what lies down the road. Track of note.

‘If I Knew’ completes the first triad of songs with each Monkee featured once and here Davy sooths his female admirers with a delicate acoustic based and piano love number. The track co-written by Jones by long time collaborator Bill Chadwick and is tailor made for Davy’s sensibility while emitting a certain timeless grooviness.

‘Bye Bye Baby Bye Bye’ is a wonderful song, shifty and syncopated Dolenz vocals bound with grace over a whining harmonica and an understated chicken picked arrangement. The backing band is made up by none other than ‘Wrecking Crew’ members Hal Blaine, James Burton and Joe Osbourne which confirms the tight and crisply played honey tonk. An excitable banjo enters into the mix as Dolenz’s vocals weave together raising the track to exceptional status. Competition for best song of side one and a solid rock rock by any group. Enjoy. 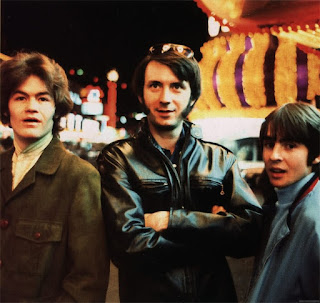 Nesmith original  ‘Never Tell a Woman Yes’ comes next and features the same backing band is the previous number and offered as a sepia toned saloon narrative earnestly told by ‘Nes’. This track is also a top shelf selection and may be a track that has escaped some Nesmith fans notice. The astounding clip clop’d drumming and clear pouring of piano underscore Nesmith’s additional joyful  wordless vocalizations and plaintive circular story telling.

In contrast musically, the choice for the David Jones track to follow came from an early collaboration with song-smiths Boyce and Hart. ‘Looking for the Good Tmes’ closes side one amidst fuzz guitar and a colorful strobe light delivery.  The song surpasses the arrangement by reveling in Jones all out vocal investment and the strength of a usually strong Boyce/Hart melody. An acceptable ending to a fulfilling side one.

Side two then opens oddly with the strangely placed ‘Lady’s Aid Society’. The song is sung with slight parody by Jones while the songs audio verite arrangement and silly street band chorus are questionable. Falsetto parade singing and sound effects try to make the bland song pop, but his one is useful only for its novelty and goofy ‘Brit’ attitude. Boyce and Hart deserved a better second representation on the record and quality control missed this one in my opinion.  I get what they are going for, it just doesn’t do it for me.The song does reflect the diverse musical display of the recording, if anything.

‘Listen to the Band’  saves the day and picks things back up with one of Nesmith’s finest melodies from the era. The song has since become a statement for the Monkees’ as a group and has proven its longevity.   Streaking horns, slippery steel and a big sound are the hallmarks of a song that should have been huge. I don’t get it, this track, the era, the content and the melodic prowess, the song should have reached greater commercial acceptance. It had opportunity as a single but as an album track it certainly levitates the side it inhabits. Nesmith’s vocals are strong morning coffee, richly filling the soundscape.  For good measure there is a short trip out mid-song organ interlude and then a well timed fade, before reprising the chorus and then ending to recorded applause.

David Jones makes up for his previous blunder on side two with the atmospheric ‘French Song’. The song slinks like a sexy soundtrack, a percussive heart surrounded by a flittering flute. Jones tells the tale of lovers, his usual M.O., but kept here in a satisfying package of ace musicianship and clean vocals.

Dolenz ‘Mommy and Daddy’ is a rare expression of social commentary by a group and that was often kept squeaky clean and with suppressed opinion. Oddly, when the group did begin to break that established mold they then crumbled. While an even more shocking alternate version is available, here Dolenz points fingers and asks pointed questions that at the time would cause flushed cheeks and turned heads. Dolenz is again found here contributing a quality track to the pot with a deeper aesthetic; and when the song breaks into a ‘big band’ beat at its conclusion; he sings like Grace Slick confidently and aggressively pointing fingers at a Jefferson Airplane gig.

Nesmith turns to another songwriter for his final donation of the album, with the ‘country honk’ of ‘Oklahoma Backroom Dancer’. A funky Nesmith production is laid on the song that also features a rollicking piano interlude and sweet Nesmith rock and roll vocals. As previously stated, Nes may have been stashing tracks for a solo turn but there is no questioning the quality of the tracks he did contribute to this record. The production and instrumentation are of the expected quality and care.

Dolenz closes the strange sequencing for the second side and the recording with the plush jazz hands of ‘Pillow Time’. The song does what it does well and is notable for Dolenz’s diverse throat and by framing his comforting crooning. Micky certainly can sing the kids to sleep with the the lullabies! The track stretches then sweetly snoozes and lays the listener down concluding a slightly erratic side two. The song settles into a puffy comfortable groove, but does leaves me wanting at its conclusion for another track. Oh well.

In spite of its questionable running order and soft spots the Monkees’ 1969 album The Monkees Present offers a useful and enjoyable listen. The album reveals the distinct personalities of its principals and their production values as well as clues into the band’s incredible success, eventual demise and established longevity.  Hindsight offers  the listener a nonjudgmental critique and historic reflection on this obscure collection of great music.

Posted by talkfromtherockroom at 4:15 PM