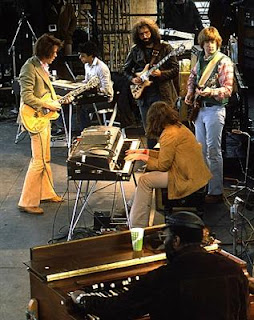 Today the first of only four concert appearances by the Grateful Dead in 1975 is grooving in the ‘rock room’. For those versed in the history of the band, in October of 1974 the band played their ‘retirement’ shows at the Winterland arena, the concerts preceding a stated period of reorganization, renewal and a reexamination of the group and their music. The band would of course return by mid-1976 fully energized for an additional 20 years of music.  What can be found in the March 23, 1975 Kezar Stadium performance by ‘Jerry Garcia and Friends’ is experimentation, eagerness and a brand new aural assault by the Grateful Dead with additional help by keyboardists and cronies Merl Saunders and Ned Lagin respectively.


This premier appearance of the retooled Dead was at the SNACK concert of 1975 which was a charity event put on in typical grand fashion by Bill Graham and spotlighting a number of Bay area bands, as well as a stunning appearance by Bob Dylan alongside Neil Young, Levon Helm, Rick Danko, Garth Hudson and Ben Keith! The Dead’s appearance was billed under the aforementioned ‘Jerry Garcia and Friends’ moniker and was a definite surprise; more so for the FM broadcast listeners than the assembled throng which was by majority a typical ‘Dead’ audience. What is even more surprising is that the band played a 35+ minute set of brand new instrumental material highlighted by the swirling combo of three keyboardists and the usual suspects. David Crosby was also scheduled to appear with the musicians but had personal matters that prevented the collaboration. Donna Godchaux does not appear at this concert.

The Dead premiered material from their upcoming Blues for Allah album including the albums major title track composition, ‘Blues for Allah’ which here envelopes a stunning ‘Stronger than Dirt, Milking the Turkey’ debut appearance. Unlike these tunes future appearances in June at Winterland and in August at the Great American Music Hall, (Officially released as One from the Vault) here they emit a looser attitude and a formative creative excitement that lends a joyous and frayed aesthetic to the arrangements. 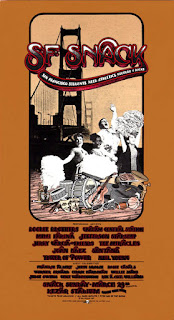 This concert appearance was released ‘officially’ as a bonus disc for anyone who pre-ordered the Beyond Description box set from the Grateful Dead website in 2004. That bonus disc now sells for hundreds of dollars online, but thankfully per usual the music is still available alternately as a crispy soundboard if you know where to look. The ‘rock room’ today is playing a circulating lossless soundboard version of the show while kicking back in a smoky and stunned tizzy.

The show begins with an introduction by Bill Graham who per usual introduces each member of the band and forgetting Ned Lagin in the process. Lesh and Garcia then begin to particulate their way into the meterless and martian drift of ‘Blues for Allah’. Completely unknown at the time to any of the assembled listeners the wordless melody swells with strange agitated vibrations. Saunders and Godchaux become a matched pair with Hammond and Fender Rhodes making perfect bedfellows, blurring the ancient edges of the song. Garcia’s guitar takes on elastic and highly charged tone matched with Lesh’s typically stout strings. After a fulfilling statement of the undulating desert licks exploring erotic and uncultivated lands the song leaves the theme behind and retreats to dusk. Garcia plays nuanced single note plucks that shimmer against the spectral winds created by the percussionists and keyboardists.

A tangible strangeness now permeates the stage; it now becomes ‘free turf’ for the musicians. A circular space is developed; indiscernible objects levitate then disappear into darkness. Garcia’s notes are perched on the edge of gentle distortion. Keith soon joins helping to develop a loom of sounds with Garcia. Weir is a post driven into the earth helping to keep some sort of tether to the music. Lesh groans, the sands begin to whip, chaos ensues and the familiar tiger stirs into a maelstrom. Garcia trills into the upper reaches and the band collapses around his directive. Heavy. 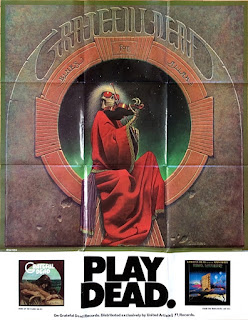 Soon an ancient summit is reached, the music out of control but perfectly directed. Stretched to its maximum capabilities Lesh seizes the music from the post orgasmic drift thumping out the bass figure for ‘Stronger than Dirt’. In the ‘rock room’s opinion the following moments are some of the finest in the long career of the Grateful Dead. These are the moments that heads pine for.  Lesh sets the table as a deeply funky and organic jam develops. Weir is responsible for the dirty undercurrent, Garcia climbs the constructed ladders runs playing the perfect lines, expressive notes differentiated by touch, time and attentiveness. Lagin buzzes excitedly adding his static to the churning storm. There is some all time musical alchemy taking place here.

All band members place their hands on the musical touchstone, moving through unrehearsed pauses before landing into a well timed change, not as obvious or developed as the rendition on One from the Vault but in some ways more stunning. The rhythm devils  now appear continuing the momentum with a short but fresh drums segment.

Lesh soon signals the return to ‘Stronger than Dirt’ and Garcia picks up right where he left off pre drums. Hints of ‘Slipknot’ tighten around the musical flow before loosening the twine and unraveling into disparate Garcia exclamations of awesomeness. Garcia then changes to a thicker tone while Godchaux fights for the title of most amazing musician on the stage. Soon a confetti flash of guitar notes detonates while Lesh changes the plans. Saunders is invited to spread butter over the top of this musical madness that becomes highlighted by both Merl and the drummers.

‘Slipknot’ again bobs its head from the turbulent jamming acting as a guide before Garcia leaves it behind in a trail of smoke and charred remnants. Lesh leaves a surprise detonation behind and Garcia takes the hint scribbling a note reminiscent of a transition into one of many Garcia ballads. Once Garcia grasps a hold of the gritty ‘blues’ lick that leads to the second half of ‘Blues for Allah’, he completes the circle as the group transitions back into the song as one.

Weepy guitar licks introduce the first ‘vocals’ of the evening as group sung ‘doo, doo, doo’s’ descend in place of the reflected guitar line. This repeated melody gently closes the song and is followed by a ‘Thanks for coming’ from Phil Lesh. On the soundboard the crowd responds in kind properly going crazy for the 30+ minute clinic they just witnessed.

The first and only taste of recognizable Grateful Dead of the evening follows with a hot to the touch reading of ‘Johnny B Goode’, a proper period to the experimental musical sentence that preceded it. The drummers pop like illegal fireworks helping to flame a smoking version of a favorite Grateful Dead encore. Wow.

The Grateful Dead’s performance on March 23, 1975 ushered in a new era for compositional development and concert performances for the group. But what remained the same for this afternoon performance was the band’s willingness to experiment, improvise and confound all expectations. Only the good ol’ Grateful Dead would play a set of brand new unreleased instrumental music for a charity concert to be broadcast on FM radio. Perhaps overshadowed by Dylan and the Band’s (members of) appearance later in the show and a later official release of their own August performance of the same material, this unique piece of the Grateful Dead history is a contender for ‘best of’ status in my humble opinion. Famous for blowing the big events, on this day the Dead blew everybody’s mind whether familiar with their music or not.

Grateful Dead Kezar Stadium 3/23/1975
Posted by talkfromtherockroom at 11:46 AM No comments: