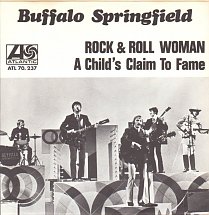 The root's of 'Country Rock' are tangled and deep. While the genesis of the movement are often discussed and debated the answers are often closely related. Regardless if  its The Byrds, the Beatles, Buffalo Springfield or the Monkees, the mid to late 1960's was littered with examples of rock colliding with multiple genres. This process includes the folk backgrounds of some the composers as well as the blues country influences in their writing. The respective members of many of the bands in this era would end up contributing to and playing with each other on numerous projects.

Spinning today in the 'rock room' is the 1967 single release 'B' side by the 'Buffalo Springfield', 'A Child's Claim to Fame'. Written by Richie Furay, who would later lead 1970's 'Country Rock' pioneers 'Poco'; the song can also be found on the 'Buffalo Springfield's second album, Buffalo Springfield Again. With two other principal songwriters in the group named Neil Young and Stephen Stills, Furay had no original songs featured on the band's debut LP, but that changed with their second release. Furay's songs were sweetly melodic and gently touched with a soft country lilt and his talent as a song smith could not be suppressed. A similar situation to squeezing George Harrison's songs onto Beatle records

Nestled on the flip side of Stephen Stills, 'Rock and Roll Woman', 'A Child's Claim to Fame' was recorded on June 21, 1967 following Monterey Pop and on the solstice of the 'Summer of Love', yet not a drop of psychedelia can be detected. The acoustic based song is looked fondly upon by Furay who has noted that it was quite an achievement for him as a composer. The track spotlights famed guitar gunslinger James Burton on dobro which lends a high and lonesome authenticity to the cut. Burton is a world renowned guitarist and played with Furay idol Ricky Nelson in addition to his extended time with Elvis among others. (he would also play on Gram Parson's debut album) 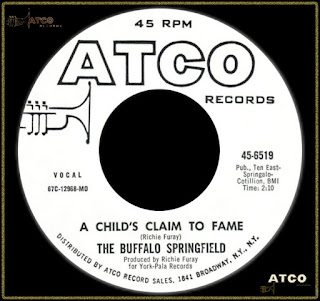 The track made nary a dent in the charts as the 'A' side 'Rock and Roll Woman' only hovered around the 40's despite being one of the Summer's finest 'A' sides and arguably one of the Springfield's celebrated cuts. The song's influence, importance and recognition by others cannot be understated. Like previously stated the song must also be looked at in the context of its nod to country music. The track sits comfortably with other songs placed in the discussion of  the'Country 'Rock' label. Tracks such as 'Beatles' 'Act Naturally', the 'Byrds' 'Time Between', the Monkees' 'Papa Gene's Blues' and the 'Springfield's' own 'Go and Say Goodbye' from their 1966 debut.

Dewey Martin keeps things simple on drums with a straightforward country clop on the snare rim. Over the head of the verse and leading into the the breaks the softly muted fuzz of Young's guitar lends tasty exclamations of shimmering vibrato. The first solo is then taken by Young and is placed perfectly, emanating a vintage feel with a futuristic sound containing plucky notes and lustrous strums.

The second verse follows, and the solo spot at the end of the second set of verses is taken by Stephen Stills. Stills lends a typically fantastic serpentine acoustic line that dosey doe's with Burton's dobro at just the right times. Stills solo line continues under the book ending Furay/Burton hook as the first verse is then sung again. 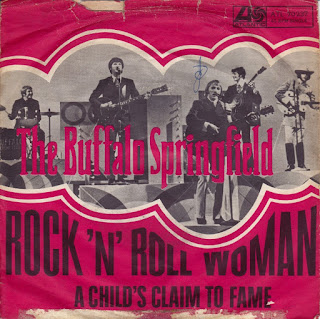 The content of 'A Child's Claim to Fame' was inspired by the famously contentious relationship between Neil Young and his band mates. The song is Richie Furay's reaction at the time to Young's constant coming and going from the band and his increasingly erratic behavior. Years later Furay even alluded the Young may have written 'I Am a Child' as a response to 'A Child's Claim to Fame'. The sadness and disappointment in Furay's lyrics illustrates what type of dynamics contributed to the short shelf life of the group and how youth, personality and popularity ended the band before it really started.

Only one more album would remain for the band and that LP, Last Time Around, was a fragmented example of what had originally made the band so great. But for a brief time the 'Springfield' had it all. 'A Child's Claim to Fame', even in its brevity, is an amazing recording and sums up the entirety of the band's experience through its rustic instrumental aesthetic, unabashed lyrics and honest recitation.

A Child's Claim To Fame

Posted by talkfromtherockroom at 1:23 PM