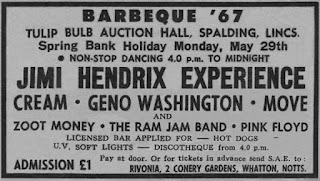 Just prior to the Technicolor bloom of 1967’s ‘Summer of Love’; and 2 weeks before Monterey Pop was The Spalding Festival Barbecue 67. Featuring a line up comprised of ‘The Move’, ‘Pink Floyd’, ‘Ram Jam Band’ and the headliners, Cream and the ‘Jimi Hendrix Experience’, the festival was a forerunner to the more widely known gatherings of the era Monterey Pop, Woodstock, Isle of Wight etc. This concert, in the ‘rock room’s’ humble opinion is the signpost where the psych got heavy, and the two towering bands of the era changed the way rock and roll was played….. all in a barn for 1 British pound.

Held at Tulip Bulb auction hall in Linconshire, England with a capacity of 4,000, legend has the concert being oversold and acoustically horrendous. In what amounted to a huge hot shed, Barbecue 67’ was witness to one of the first musical movements of the legendary Summer. In recently circulating photos of the festival one can see piles of amps, wires and a closely packed audience enthralled with the performers. Tall tales exists of eager fans sneaking in side doors, rushing under the stage to their point of hands being able to stick through the floor, and an ornery headlining Hendrix who smashed his guitar and torched it as well as knocking over his stacks.  One thing that cannot be doubted and the focus of today’s ‘rock room’ rant is the Cream put on an amazing and stunning musical display.

Spinning in the ‘rock room’ today is a 40 minute audience recorded document from the evening. While the vocals are distant and Jack Bruce’s bass plays hide and seek on the recording what does exists is a stellar aural document of a legendary and fertile period in rock and roll history. Headphones are recommended for an all encompassing experience and the ambiance of the room. The recording is surprisingly clear for the era this stereo recording.  Clapton in particular is playing with a competitive fire (sharing the bill with friend Hendrix) and reaching for amazing improvisational alchemy. For a venue with horrible acoustics the resulting recording is surprisingly good and able with the right environment to put you in the human crush of Barbecue 67. 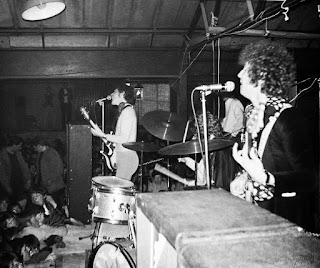 Hailing from the band’s 1966 debut album Fresh Cream, Cream begins its set with ‘NSU’. As the band’s on stage prowess increased over time ‘NSU’ would crack like an egg spilling out rich psychedelic from its innards. Here for this performance, ‘NSU’ is taught and loud containing all its power in a few short minutes. To the ‘rock room’s ears Clapton is playing his ‘Fool’ Gibson SG as his tone is rotund and a goodexample of his 66-68 SG era. Baker is thrashing around his kit and as previously mentioned Bruce’s bass is there but not really. The crowd is enthusiastically clapping to Bakers churning groove through the verse before the chorus detonates in a spray of day glo. Clapton slams on his E string as the central solo begins soon becoming melted plastic as Clapton does his best Hendrix expression early in the gig. A quick return to the verse and the show is underway.

A succinct studio standard rendition of ‘Sunshine of Your Love’ follows months before its single release in November of 67. Fresh out of the oven, ‘Sunshine’ is played briskly over Baker’s native tom-tom thumping. There seem to be some issues with EC’s rig which mess with the groove a bit but are rectified by the solo segment. While the vocals remain distant Bruce sings gloriously and confidently. Clapton’s famed ‘woman tone’ coo’s its way out of the SG for variations on the ‘Sunshine’ theme through the midsection of the song. Clapton takes two melodically lachrymose turns through his solo. Similarly to ‘NSU’, ‘Sunshine’ is still an adolescent and the song has not yet grown into its outro jam.

The next three songs to follow each highlight a member of the band respectively. The first of the triad is ‘We’re Gone Wrong’ which is introduced as a slow quiet number (by EC?). The cascading rolls of Bakers drums carry the dynamic and tension filled song from Fresh Cream. Bruce’s vocals are stunningly dramatic and operatic rising and falling with Clapton’s timed vibrato strums. Each strum rises in intensity until the verse gets slashed open by now blindingly sharp chords. Bruce’s melody lines ooze a mysterious exoticism. The first small improvisational section of the evening occurs as the basic frame of the song is discarded and the tempo is increased. Clapton and Baker percolate as one as the song morphs into a somewhat directionless jam which may be caused by a lack of Jack Bruce’s bass. But even without stretching out fully, this reading epitomizes Cream’s performances of the time. 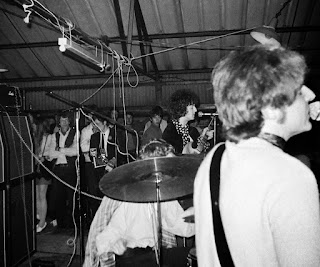 Jack introduces the next song, ‘Steppin Out’ which acts as a spotlight moment for Clapton. Often a highlight of Cream performances, Clapton recorded three different versions of the 1959 Memphis Slim classic cut. Clapton played the song with the Powerhouse, Bluesbreakers and Cream and with each reading the song was extended and Clapton’s sonic pallet was increased. The version found here reaches around five minutes but has a substantial amount of virtuosity packed into it. The Hendrix influence is palpable with Clapton dispersing an array of bends, twists and slick neck slides. I can definitively say that having his friend as well as completion Jimi Hendrix watching from the wings helped to charge this particular version of ‘Steppin’ Out’.

Beginning with the song’s recognizable lick as the volume on the tape fluctuates, Baker and Bruce walk in a stomping lock step. Bruce’s work here is dizzying. Clapton looking sharp walks into the street and at around a minute in changes from a muted tone to a salient one and peels off a few acid drenched Chuck Berry licks.  At 1:45 into the song, Clapton grabs onto a bluesy turnaround and repeats it increasing in tempo which sets the fuse alight causing the trio to converge at an agreed upon musical intersection. At a bit past three minutes Clapton’s playing takes on a rough edged, ‘devil may care’ attitude, with an unrestrained wildness that takes the jamming to another place. Bruce’s upper neck work is audible and the band is shaping the song like molten metal! Baker bashes his kit to bits while driving the song to its syncopated conclusion. Wow. The crowd explodes in recognition and as a result of the furious performance starts to get rowdy.

While the crowd yells, Clapton introduces and counts off Bruce’s spotlight segment which features him on harmonica playing ‘Rollin and Tumblin’. Again the vocals are obscured but in no way detracts from the high energy performance. Clapton and Bruce enter into a series of duets of harp/guitar and vocal/guitar while Baker plays the train tracks.  The band inters into a mid song runaway segment where Bruce wails away into the blue midnight before returning to the song proper.
Finally, Ginger Baker gets his featured moment as Jack introduces his drum solo ‘Toad’. Clapton lends a hearty dose of Hendrix drenched feedback acting as a large iron gate which swings open to reveal the big bad ‘Toad’. Baker plays his usual series of triplet filled tom-tom hits and rumbling double bass. The crowd can be heard clapping in time and urging Baker to destroy his kit as the guttural thumps reverberate around the venue.

The band concludes the evening’s performance with an overjoyed version of ‘Im So Glad’ (a UK single), hailing from the Fresh Cream album. The song, originally composed by Skip James was redressed into a blues rock format by the band becoming a thrashing expression of ecstatic song. The central jam of the tune is  Clapton and Bruce’s most melodic playing of the evening. Bruce and Clapton’s interplay is only a small glimpse of what they would develop over the next year on stages around the word. The dynamics rise and fall with Clapton floating out quotes and melodic snippets, before scrubbing his fretboard to dust when returning to the verses. The power and volume crackles off of the recording and is stunning to the ears.

One can only imagine the aesthetic, the excitement and the artistic revolution in which Barbeque 67 was birthed. Thankfully, the available recording of Cream gives us a small peek into the depth of the era and the unbelievable music being created at the time. Hopefully other performances will rise to the surface to give us a full spectrum of the evening’s festivities, but regardless the ‘rock room’ is thankful for what we have. Its mind-blowing to think what the festival would be the beginnings of and even more so that the Hendrix experience would follow Cream on that May evening, but in the end…… those were the days.