Squinting into the sun, I squeeze my eyes together tight like a clam. I'm gently skipping my hot feet across the sun fried sand. I can sense the deep blue sky and frothing dark water, contrasted by the grinding beach of lobster dreams. I feel steel drums come in and out of earshot, or maybe an acoustic guitar? Regardless, an already perfect day, now has a soundtrack. I drift in a ocean water haze, vainly following the sound intermittently coming in and out of focus on the breeze. The music tickles my eardrum on each passing gust. I decide to follow the music like a peasant behind a piper. Feeling I have nothing better to do today, I walk on, enjoying the day and my unknown jester.
My steamy stumbling beach walk takes me to a place containing a perfume air, and a fitting music. I now can clearly hear drums, and a fitting metallic chime of chunky acoustic guitar. A five foot stucco retaining wall corrals the music behind its garden gate. A voice now joins the mini orchestra, instantly familiar, but singing an unknown song. It sounds just like John Lennon." Wow, what happened to him?", I think to myself." It's been a few years without as much as a peep"." Can you imagine?", "Ha ha ha, Imagine, good one dude", I chuckle. I approach the mystery music on silent sand footsteps. A ornately decorated villa frames the larger scene, where the coastline caresses the front of a breathtaking colonial building. A glass walled sun room jettisons from the rest of the home,where I glimpse a silhouette behind pained glass.This human shape appears to have headphone ears, a long pony tale, and a nose like a Bermuda bird. The heady scent of Freesia fills my nostrils intoxicating me, and makes me feel a bit euphoric. I can't be sure what I see.
I assume this is the source of the mysterious beach serenade. The soothing music has to be emanating from this sunshine shadow. I step cautiously toward the wall, careful to not set off a alarm mutt, or security. "Hey!", "You looking for my Dad?", a young boy about five years old screams at me as he flies by like a beach Frisbee. Startled, I am unable to speak in time as the boy motors toward the front of the villa. My nervous stomach slightly recovers, "I think its about time I travel on", I say to myself out loud, feeling slightly like an intruder.
In my inspection I do not notice that the music has ceased and I am now standing by the garden gate looking like a stranded tourist. The music then starts again suddenly, sounding very Caribbean.The gangly shadow moves fluidly with the sounds through the window. The vocals cause me pause, as there is now no doubt in my vacation mind who is singing this song. I can discern the words, "Woke up this morning, blues around my head", repeated over and over on top of the guitar and drums. I feel my head start to spin and my stomach churn like seasick waves. "What in the world is John Lennon doing in Bermuda recording music?", I say to myself. Unprepared for the upcoming answer, I hear a voice yell through the window of the villa. A thick Liverpudlian accent clear as a bell echoes from the house, "Keeping away from the weirdos!" In stunned silence I stand landlocked in paradise between the ocean and John Lennon, unprepared for what will happen next. I lift the camera to my television eye, and look through the viewer....... 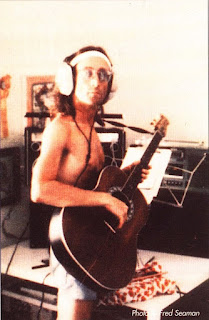 ADDENDUM: This fiction was created through dreams based on reality. The Summer of 1980 was John Lennon's last, and he was busy creating his Swan Song "Double Fantasy" while vacationing in Bermuda. John had disappeared from the public eye for five years, and was ready for his return to the music world after this period of intense creativity. The "Bermuda Demos" John created during this fertile period are some of the greatest music he wrote. By December he would be living his last days.

Steppin Out -Bermuda 1980
Posted by talkfromtherockroom at 5:29 AM