Daydreaming on a dreary September morning, I experience a unique "Radio I Ching" moment. I wake up, I walk into the rock room, and spin a 1970 Band Of Gypsy's audience recording from Baltimore, Maryland. I continue with some mundane morning tasks with Jimi playing in the background. Then, a quick glance into cyberspace reminds me that today is indeed the anniversary of James Marshall Hendrix's death. I glance at the glossy picture of Jimi dressed like a psychedelic Indian gracing my wall, and sit in the recliner to listen.
It immediately occurs to me how lucky I am to have access to to so much Hendrix music. Skeevy audience recordings, hundreds of "liberated" studio recordings, endless official releases, video recordings of Berkley, Woodstock, Monterey, and a plethora of biographical writings. Hours upon hours of Hendrix's musical creations, available to enjoy over forty ears after his death. Numerous authors ruminating about a life that was over before it started. What really strikes me is this music was all created in the time period of 1966 to 1970. It blows my mind. For four years Hendrix was creating music for the masses. In four years he developed a lifetime of music. In four years he created like he had lived forty. There is such an abundance of Hendrix material available that it seems like all he did was play music. Which is probably true.
Jimi revolutionized electric guitar, blues and psychedelic rock, in a blink of an eye. It's all subjective, but I feel no one since has done anything to match the forward thinking, and sound shaping abilities of Hendrix. I sit here thinking of Keith Richards, Neil Young, Eric Clapton, and all of Jimi's contemporaries who had the opportunity to expand their knowledge, and abilities by living long lives. I wonder what Jimi, given the same opportunity as Beck or Zappa to extend their careers past the tender age of 27 would have accomplished. Where would electric guitar playing be? Where could it have gone? What would Jimi's music have sounded like with modern technology, and modern recording techniques? What would Jimi's maturity, constant practice and performance created? The possibilities are mind numbing and almost impossible to think about. A prolific four years of Jimi's career, expanded into a fifty year career like the Stones, is almost too exciting to imagine.
Jimi is gone, and I selfishly think how I never had the chance to witness the creation of the songs that fulfill my musical life. Unable to see him in concert, like many of his fans, my exposure is strictly through the media's of vinyl, CD, and video. His abilities extinguished by pressure and drugs, Jimi burned out. He died pathetically by choking on puke, alone, on the edge of musical revolution. Jimi's 1970 audience recording interrupts my thoughts like a strong radio frequency and I hear his incendiary string bending conjuring guitar fifty years into the future. Foreshadowing every guitar player playing "acid jazz" to" tech metal ",  from Eddie Van Halen to Jack White. Jimi's composition"Machine Gun" startles my spirit like it always has, and will continue to do. Even on a distant field recording, the future of music, takes me deep into the past. Into a cold, cavernous civic center, turned "Electric Church" and balanced on the edge of magic. Jimi's power is reflected in his ability to touch me through sound waves still dancing on air from four decades ago.
Jimi's legacy is set in stone, and he does not need my tiny blog to explain its importance to music. His legacy has been disseminated endless times, by numerous people. But what my blog can express is the sadness I feel that we will never know what could have been. We will never know what Jimi's next LP would have contained musically. Where could Jimi have taken us next? After forty years Jimi is still the "greatest" guitar player of all time, and he is still revolutionizing the instrument from the grave. If you are so inclined, listen to some Jimi today, and reflect on where he took rock music, and dream about where it could have gone. 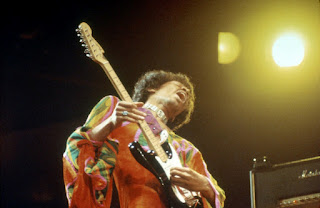 In From The Storm-1970
Posted by talkfromtherockroom at 7:06 AM