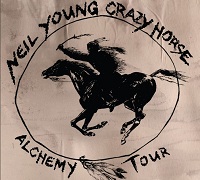 On October 8th 2012 Neil Young and Crazy Horse performed at the Wolstein Center in downtown Cleveland, Ohio. I was lucky enough to attend this show, and therefore will express my feelings about the concert in this week's blog entry. This was a mid sized arena that was a welcome relief from an expected cavernous venue. The crowd was mellow and primed for an amazing experience. There was plenty of room on the floor for moving, and the atmosphere was electric with anticipation.

Neil started his set at 9:00 PM after a group of white coated "mad scientists" and orange bedazzled "construction workers" readied the recognizable oversize stage props. Moving furiously with exaggerated movements, the stage hands scurried moving invisible objects and admiring their work . Towering, bubbly cartoon storage crates were hoisted toward the ceiling by the stagehands to reveal the over sized amplifiers hidden underneath. A dominating (15') microphone was set up at center stage, a yellow ribbon attached to it levitated on the breeze coming from the stage fans. Two vintage television screens were set up and stage left and right respectively to give every seat personal shots of the band. The arena was buzzing, and the smell of beer and "homegrown" stuck to the inside of my nose.

The horse took the stage after a very patriotic intro, complete with huge American flag and immediately ripped into the "Ragged Glory" track "Love and Only Love". Huddled into a tight circle around drummer Ralph Molina the band plowed into a extended and charged version of the tune. A fitting opener for the show with lyrics that express what the "Alchemy" tour is all about, "Love and only love will endure, hate is everything you think it is, love and only love will break it down". When Neil's first vibrato guitar solo hit my ears, shimmering as a prism through the thick air, my heart erupted. This opening track hovered around the ten minute mark and ended amongst a wash of cymbals and chiming guitars. Without pause the ending crashed into the quintessential Crazy Horse live track, 'Powderfinger". Cutting through the rough waters of "Powderfinger" the band rocked back and forth on the waves. I squeezed the ticket stub stuffed in my pocket and thought to myself how lucky I was to be witnessing this performance. Legendary stuff, and I am shaking with excitement. I'm about twenty feet from the stage, slightly stage left with my eyes on Neil.

Fans of Neil Young are aware that there is one thing Neil does not do. That is cater to the wants and needs of his audience or critics. Neil does whatever the hell he wants, in whatever way he feel fit. The 'Alchemy" tour is no different, and Neil used the majority of the rest of the performance to illustrate to his fans where he is "now". Five new songs were introduced over the course of the rest of the show. After forty plus years of touring Neil has acquired an awareness as an artist. He knows how hard it is to introduce new songs to an "old" audience. I believe Neil has learned that the way to stay relevant is to stay true to his own muse, and to keep changing, because in the end his audience will have to "listen harder". 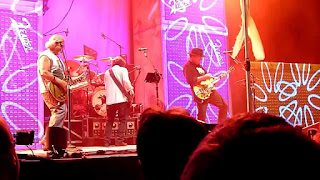 The next two songs in the show were of the brand new variety. First up was "Born In Ontario" which the title sums up succinctly. A biographical stomp with a "Harvest" vibe, this tune moved smoothly with the rudimentary rhythm thrown down by the horse. With a melody that was easy on the ears and a swinging groove, this tune was an early concert favorite. Purely Neil. A nice introduction to the new songs he has been composing. Following 'Born in Ontario" was in my opinion the centerpiece and first "peak" of the performance.  "Walk Like a Giant" was presented like an epic in the variety of past Crazy Horses glories such as, "Cortez the Killer" and "Like a Hurricane". With a whistled fairy tale melody line, "Walk Like a Giant" left footprints in its wake with a churning heavy back beat. Neil played Paul Bunyan by chopping wood with his huge quivering guitar lines. With his firetruck red suspenders hanging akimbo, Neil rocked back and forth shooting riff after melodic riff toward the back of the arena. "Walk Like a Giant" trampled upwards of twenty minutes, with the end of the tune suddenly dropping off of a cliff into a darker realm. Explosive tom tom hits by Molina in collaboration with pixelated feedback growls from Pancho and Neil, made the music moan like two boulders grinding themselves into dust. Guttural belches from the band sounded like dropping a guitar down a flight of steps. Billy thumped his bass and squeezed closer to the amps groaning notes. The arena moaned as Neil painted the "giants walk" on a canvas for all participants too see. This is the reason live music is such a special spectacle to witness. The moments when you can lose all time and space, like I experienced in "Walk Like a Giant" make the entire journey worthwhile.

From the smoking rubble that was, "Walk Like a Giant" Neil emerged from the haze with his acoustic softly playing the opening line to, "Needle and the Damage Done". The crowd roared its approval and sang along. Following this classic rendition, Neil gave the crowd another new number. Still donning his acoustic Neil strummed, 'Twisted Road" a song that name drops, and honors friends and musical heroes from throughout Neil's life. Whereas a former Neil track, "From Hank to Hendrix" is a reminiscence of a friend or lover, "Twisted Road" is a tribute. Crisp Neil plucks on his acoustic guitar rang in my head like an old friend's voice. This performance was in perfect contrast to the madness that proceeded it. Neil sang, "How does it feel?" to whoops from the grooving crowd. The acoustic interlude acted as a prelude to what would be the second half of the show.

Yet another new song this one titled "Ramada Inn" started the second half festivities. To my ears this song would not have sounded out of place on 2003's Greendale LP. The context of this "story" tune would be too much for me to disseminate in this review. I can offer that the song was long, took its time, and was well narrated by the man himself. I recommend checking out the sixteen minute video for this song, which I will include the link for below. My exposure to the new songs was positive and I can offer to the reader that Neil is still a man creating at at furious pace. After a brief pause Neil stepped to his microphone and quipped, "Here's one I wrote this morning", and started the instantly recognizable introduction to "Cinnamon Girl". To anyone put off by the large number of new songs played, this instantly got their attention back. A well played version of a legendary song got the entire arena fired up, and on their collective feet.

After the reception quieted Neil and the Horse started what I consider to be the second glorious peak of the show. After rhythm guitarist Poncho Sampedro gave the obligitory "finger" to everyone on the floor the band slugged its way into "F#ckin Up". A thick sludgy version of the song filled with tight band interplay and Neil's snaking solos. Everybody in the band had beaming grins on their faces, and Neil bumped into Billy Talbot repeatedly as he hunched over conjuring howling beasts from "ol' blackie". This is why Neil always comes back to playing with 'Crazy Horse". Freedom, friends, and power are the things the band thrives on and offer up to Neil.The enthusiasm contained within 'F#ckin Up" was infectious and the crowd caught it.I included a link for a audience shot version of this song below. Before anyone could gain any composure from the jam that just occurred, Neil stepped to the mike and introduced the final new song of the evening, "Psychedelic Pill". Neil remarked something about "all my songs sound the same" and then blasted into the new number. A fitting spectral light display collaborated with the images of the song. Meanwhile its catchy chorus marked by "shakey" "Crazy Horse" backing vocals was already ingrained in my mind. In my opinion, not the best new song of the night, but fun and well played nonetheless.

The concert came to a crashing and apocalyptic close with the expected but welcome, "Hey Hey, My My) Into the Black". The floor of the arena became a celebratory stomp with everyone including myself smiling and staring attentively at the performance unfolding. A fitting conclusion to a show which like a desolate mountain path rolled through many peaks and magical locations. Screaming for an encore is always an anticipatory moment, especially when waiting for an artist as eclectic as Neil. When Neil and Crazy Horse finally reappeared it was for a hallucinatory trip through Buffalo Springfield's, "Mr. Soul". A tune I can never tire of hearing, this was a note perfect rendition of a song that made me shake my bones. "Mr. Soul" indeed. The final song and fitting send off for the evening was "Roll Another Number (For the Road)". A swinging roadhouse version of the song followed with Neil's emphatic vocals and tasteful saloon instrumentation. A sweet and stony sendoff to the crowd, and the perfect epilogue to a long satisfying concert. We shouted our goodbyes, and I yelled my ass off for "Dangerbird" but to no avail. We then made our post concert swagger to the exits, high on the feeling you can only get after a really good show.

I love live music, and I sometimes seem to have unrealistic expectations when seeing my heroes live in concert. In the case of the Wolstein Center Neil Young and Crazy Horse show, I was in a heightened state of anticipation because it had been a while since I had seen Neil. This show met every hope I had for the performance.The set list was a masterful mix of old and new, and was played with a "Ragged Glory". Neil remains focused on the future and pays homage when necessary to his past. The band is in a good place, and the love could be felt translating from performer to attendee. Thank you to Neil Young and Crazy Horse for a shining night full of reflection, creation, and old friends. 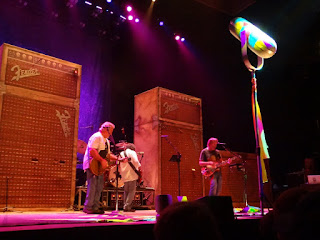 Posted by talkfromtherockroom at 9:39 AM