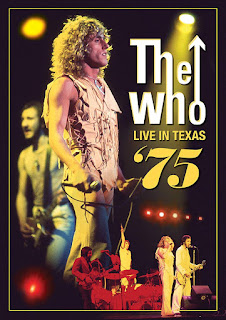 Recently "The Who" reached into their vaults and released a smoking visual document of one of the performances from their 1975 US tour. In support of the fantastic "The Who By Numbers" LP the following US tour was filled with thrilling concerts. Many Who fans consider this era to contain some of their greatest shows.  Previously available only as a bootleg recording, the November 20th performance has now been officially released. This version has been cleaned up, restored, and is a stunning record of "The Who" at the summit of their career. "The Who Live in Texas 75" is a must have for any Mod or Rocker.

The majority of the show is filmed from a stationary camera on the side of the stage, and its obvious that this concert was never considered for a live release at the time. I assume it was filmed by the venue's staff or a promoter. There is also a stage level camera used intermittently to good effect. But the strength of the performance, as well as a few rare goods for the hardcore fan make this an obvious choice for release by the powers that be. The color is cleaned up, the sound clear, and the performance is incendiary. My one complaint is that here could be a bit more Entwistle on the DVD. But due to the placement of the camera he's slightly tucked away on the stage. Regardless, this is a vital and important addition to The Who catalog.

The DVD starts with the band taking to the darkened stage and filling the arena with various plucks, palm mutes, and tom tom hits while they tune up. The lights rise as Pete slashes the opening chords to "Substitute", and we're off! The opening one-two punch of "Substitute", "I Can't Explain" has all animation and power of a show opener you could hope for.  The rhythm section is locked in from the start. Keith Moon is in fine form and Entwistle's Alembic bass is crushing. The show starts to get interesting when Daltrey introduces 'Squeeze Box" as the next song to be played. Electrified and sounding like a polka on acid, "The Ooo" stomp the air out of the "Squeeze Box". Bathed in a soft red light Moon bangs out counter rhythms that sounds like a pack of dogs charging across hardwood floors. Townshend plays a slightly country solo while pacing the stage with his Gibson.  Daltrey looks on in placid Woodstock glory, swinging his microphone is classic fashion.

The first half of this DVD is stunning in its portrayal of this performance. You will not find any special effects that block out half of the stage, or strange camera angles or interludes. What you will find is a up close view of the "The Who" in all of their glory. It's a no frills concert video, any additions are straight up screen shots or still pictures. There are a few superimposition's throughout but these in no way hinder the viewing experience. After a "standard" which is to say remarkable version of "Baba O'Riley", the next song up in the rotation is John Entwistle's"Boris The Spider". Introduced by Pete as "a strange song", Keith echoes him from behind the drum kit saying John, "is a very weird person". With Entwistle's bass amped to sound like long stringy strands of rubbery spider webbing, the band creeps and crawls its way through a fun version of the tune. My personal favorite portion of the concert occurs next with the aurally and visually stunning trifecta of songs that follow. The rarely played and new at the time "However Much I Booze" is first sung tentatively by Pete, but by the end of the song is being delivered with confidence. This tune was preformed by Pete because at the time Roger did not want to sing the highly personal lyrics. What follows is a boozy street walk through Pete's imagination and a striking version of a rarely played song.

Next up is the only song from "Quadrophenia" to be featured during the performance, a "hold your breath" version of "Drowned". It is during this track that I do notice a few of the visual issues including but not limited to trails, and some color bleeding. No big deal because this version of "Drowned" rolls to a delicious boil. Entwistle stands stoically as a statue, as Pete and Roger swing, stomp, and march around the stage.Well passed warmed up, this segment of the DVD is essential Who. If only this section of video was released it would be an epiphany. The last song of the peaking trilogy is another track from "The Who By Numbers", "Dreaming From The Waist". My favorite song of the performance, "Dreaming" is a shuddering and shuttering jam with a gold star given to Mr. John Entwistle. While Pete Townshend chops wood with his serrated guitar strikes, Entwistle slithers long snaky lead bass lines over the choppy rhythm. It's quite the role reversal with Entwistle basically playing the lead lines during this tune. During this song Pete starts to become very animated, adding in his well known leaps and thrusts to punctuate the peaks. By the intense look on Keith Moon's face at the end of this song its obvious to me everyone in the band just "hit the note". I feel breathless after watching this sequence of "The Who" at their very best. All I can say is watch it. If you've already seen it, watch it again.

Keith Moon introduces the next tune, "Behind Blue Eyes" by saying, "I'm now going to do seventeen numbers of my new album", before he leaves the stage to the other three for the drumless section of "Behind Blue Eyes". Keith looking fit and trim also introduces the band as his three best friends, "Pete John and Roger, not necessarily in that order." When Keith comes back in for the heavy part of the song, the performance reaches the same towering heights as the previous tracks. Following "Behind Blue Eyes" the band spotlights the "Tommy" segment of the show. Unlike the 1969 and 1970 performances this is the abridged version of the "rock opera". Pete growls into the microphone, "excerpts" before the band begins "Amazing Journey". Personally I favor the early versions of "Tommy" in 1969 when played in its entirety. But these later performances have a charm all of their own, and have a more ragged and improvised feel. In this show the band stomps its way through the "popular" sections of the "opera". "Amazing Journey/Sparks" isolates Pete fiddling with his hi watt amps and hunching over to face Keith while he absolutely annihilates his Les Paul with a stunning solo.

It is true that Pete and the band tired of playing "Tommy" every night, hence the truncated version featured here. It is also true that they were aware of the its popularity and played the shit out of it most of the time. On this night they performed it like it was the last time. With Meher Baba pendant dangling from his neck and aggressive dark eyes Pete directs his rock orchestra similarly to a crazed bipolar conductor. The Who's PA system sizzles with heat like a flare on the sun, and the energy is contagious. One of the numerous highlights of the "Tommy" section is seeing and hearing Keith play evil Uncle Ernie in "Fiddle About" as he grunts and growls his filthy way through the narration. "I'm Free" runs from captivity, and accelerates its way through its many tempo changes and sideways rhythm making it a top notch version.

The "Tommy" performance comes to a shattering conclusion, and the band prepares to close the show with an extended and blistering version of their most loved song, and some rarities thrown in for the hardcore. "Summertime Blues" starts the festivities and is hot, fast, and quick. Before the crowd can catch their breath the band thud their way into the opening of "My Generation" which rolls on and on into an extended medley. First "Join Together" winds its way out of the "Generation" outro jam with a stout and substantial improvised section that would make heavy metal guitarists blush. Punctuated with Roger Daltrey screams Pete shakes his guitar like a stringed maraca extracting bellowing feedback howls. This jam slides into one of my favorite Who songs, "Naked Eye" where Roger and Pete exchange verses, and Pete swings his arm in a windmill that looks like he was pulled back by a huge rubber band and released. With some sizzles and pops acting as a segue, a crunchy funky "Roadrunner" rises from the ashes of "Naked Eye". A nice surprise for the crowd and a great visual on the DVD as I can tell the band is really getting off. Just when you think the band can't possibly bring the energy up any higher they start the introduction to "Wont Get Fooled Again". This is one of those songs I feel gets diluted over time, based on its being played on every "classic rock" radio station is the world. Versions like the one on this DVD make me realize how relevant and amazing the song still is. It's impossible to take for granted when you witness the legendary strength and stage persona of the amazing Who.

The Who take their bows, and exit the stage, the crowd is out of control. When the band returns to the stage they encore with "Magic Bus", the obvious and best choice for a crowd singalong. Pete dressed in long white coat does a foot tappin dance to the Bo Diddley beat, and Roger blows some quick harp blasts. Pete is all smiles as he "asks" the lyrics to the crowd. "Magic Bus" builds and then drops into a "My Generation Blues", a fitting bookend to the sequence of music that proceeded it. The three instrumental members of the band again lock into a delicious climax which ends up finishing somewhat oddly.. Entwistle, not wanting to end the show continues to conclude the song strumming his strings as Roger, Pete, and Keith gather at center stage. The band is all grins as they pull John away from his stack to thank the crowd. Pete drags jump suited Keith by the collar, and the show is over.

I feel exhausted as the DVD ends and it returns to the menu screen. It's that kind of rock concert. Although I am familiar with this footage previous to the release, I'm ecstatic that there is now a "definitive" version. It looks good, sounds great, and features the original Who during a period of their career when they were awe inspiring. In my opinion this is a better performance than the Kilburn 1977 DVD release. While that footage is better looking, this concert is the superior performance. I do recommend the Kilburn footage to anyone who has not seen it, because it does contain moments of transcendence. But Houston on this night in 1975 was a lucky bunch. The onstage banter and camaraderie displayed on this video is priceless and any rock fan will appreciate this glimpse into prime era Who. 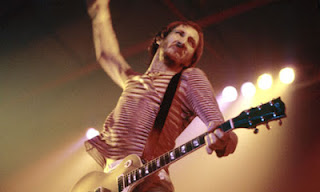 However Much I Booze 1975 Houston


Posted by talkfromtherockroom at 11:28 AM