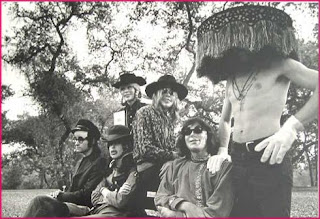 Recorded at the legendary Fillmore East on November 28 and 29th 1969, "Sweeping Up the Spotlight" captures the Jefferson Airplane at their tightest and most hallucinatory, having already approached legendary status in the rock pantheon. This archival recording and official release is a beautiful sounding capture of the band shortly before their fracture into many different elements, and at a time where psychedelic rock was reaching extravagant heights.

Today in the "rock room" I pull this 2007 CD from my vault shelves and prepare for lift off. Compared to other live releases of the Airplane, including 1969's definitive "Bless It's Pointed Little Head" this release features a powerful and sometimes recklessly intense Jefferson Airplane prodded on by the notoriously crazy Fillmore East crowd. Being that this is a compilation of two performances, the track listing is not an actual set list as played, but a mixture of the best tracks. While the Airplane, similarly to San Fransisco brethren The Grateful Dead, were sometime noted for erratic performances in their early days based on many external and internal factors; this collection distills the shows down to their very best performances.

The opening of the CD is a rough and ready version of "Volunteers" signaled by Paul Kantner's chiming Rickenbacker guitar strums. Balanced precariously on the edge, the music teeters back and forth between magic and disaster, like a runaway semi truck barley gripping to the road as it negotiates sudden turns. Marty Balin and Grace Slick trade punches vocally as the Airplane's classic "sing when you can" vocals wrap around one another. "Volunteers" a fitting opener for the show and recording, as you would be hard pressed to find another song so quintessentially "60's".

Following up "Volunteers" is the traditional song, "Good Shepherd" arranged by Jorma Kaukonen, and deranged by the Airplane. "Good Shepherd" was described by Jorma as being a "psychedelic folk rock song", which is an apt description. The band absolutely explodes into the guitar solo segment of the tune with Jorma spitting sinewy over-driven guitar licks over Jack Casady's apocalyptic "Alembicized" bass's depth charges. One of my personal favorite Airplane songs, and a definitive version contained on this release.

The energy stays consistent with whats introduced as " a song about your television set", "Plastic Fantastic Lover". Marty Balin lays down some white boy scat over the pulsating liquid rhythm. Again the tune is signaled by a luscious and metallic Paul Kantner guitar strike, funky and tight. "Plastic Fantastic Lover" flies by supersonically, blink and you will miss it. Special notice goes to Jorma's arpeggio break down licks, which to these ears sound like they were lifted from a live version of the Grateful Dead's "Viola Lee Blues". Good stuff. 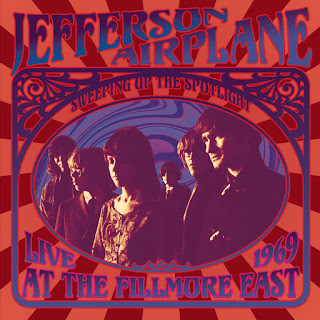 A Jorma and Jack favorite, "Uncle Sam Blues" is up next and I find myself turning the volume up a little more, as the band smokes this one down to the butt. Heavy, and thick as molasses in the wintertime, the rhythm section of Spencer Dryden and Casady sludge through the changes as Jorma, with a sly grin in his voice sings the "pro war" lyrics. The genesis of "Hot Tuna" can be found in this hardcore performance of "Uncle Sam Blues".Introduced by a rolling and tumbling Dryden drum beat the Marty Balin penned "3/5 of a Mile In 10 Seconds" blares from my speakers with a kinetic intent. All three vocalist's Marty, Paul and Grace get it on, in a triad of vocal gymnastics. The energy from the stage is infectious and mind altering, as screams and caterwauls echo off of the band's churning electric chaos.

Rolling in on a husky Kaukonen guitar line, "You Wear Your Dresses Too Short" struts sexily down the New York City streets, showing enough leg to get the assembled crowd excited. More about the jam than the lyrical content "You Wear Your Dresses Too Short" is a Balin composition featuring his impressive dynamic vocal range punctuated with stinging Jorma counterpoints. The tune stretches to over nine minutes and like a snowball rolling down hill picks up speed and girth until it reaches its chosen destination. Representative of the "San Fransisco sound" this jam sprawls out like a liquid light display across the assembled crowd.

Similarly to the aforementioned "Good Shepherd", the next track, "Come Back Baby" is another sepia toned traditional song turned technicolor freak out by the Airplane. Jorma sings lead and deconstructs the classic blues through numerous effervescent guitar solos. Casady's tonal varieties are unbelievable, and my mind lets the music pass through me, as opposed to keying on the specific riffs. This late 1969 performance is a must have for any fan of pure psychedelic rock performed to a hungry audience. This release fell through the cracks of my own music collection, so I 'm sure it has also languished in the bins of music shops everywhere, lost among the expansive landscape of live concert releases.

The concert  now gets extremely spaced out, in a good way, over the next tracks.  Drippy and trippy, "Won't You Try/Saturday Afternoon" features the three vocalists intertwining with one another as the group shakes and shifts the stage underneath them. A belligerently distorted Kaukonen guitar drives the band through the spongy instrumental changes. The introduction to "The Ballad of You, Me and Pooneil" spotlights the same destructive Kaukonen guitar sound spraying out prismatic feedback crashes and prefacing the slamming groove of "Pooneil" "Pooneil" crashes into a chordal extravaganza by Casady, as he takes a rich and thick slice out of his bass solo. The Airplane enter a tailspin as they exit Casady's solo piece, and rotate faster and faster crashing from the stratosphere toward a meeting with the earth, also reflected in the lyric, "If you were a cloud and you sailed up there,You'd sail on water as blue as air,You'd see me here in the fields and say,"Doesn't the sky look green today?" The band sings the concluding lyrics and ends the excellent ten plus minute "Pooneil".

"White Rabbit" follows and is a note perfect rendition with a nice twist on its normal rhythmic drum groove by Spencer Dryden. Grace speaks to the crowd after the conclusion of "White Rabbit" and her dialog is where the title of the compact disc "Sweeping Up the Spotlight" gets its genesis. The final two songs of the release feel like an encore to me, but that is probably just a testament to the order of the track listing. For a compilation, the CD has a great "feel" to it.

"Crown of Creation" is a fiery testament, eerily relevant even in today's very different world. The band makes the three and a half minute song seem historically long, navigating its changes. A defining statement by the "Airplane" and an important track in their catalog. As soon as "Crown of Creation" ends, Casady hammers out the pounding bass line to "The Other Side of This Life". Penned by Fred Neil, this song is another example of the "Jefferson Airplane" taking a folk or traditional tune and pouring "Owsley's finest" all over it until its drenched in mind altering visions. Wringing every bit of psychoactive substance from the song, the Airplane throttle through the number as such a rate that it makes me chuckle. The playing is right on, but played with such a reckless abandon that it has to make the listener smile. Jorma is scrubbing his guitar like an ancient washboard with a scratchy percussive tempo. At the song's climatic moment Kantner is striking chattering chords from his Rickenbacker, Jorma is weaving webs around himself in "waterfall colors", and Casady is sliding up and down the fretboard like a man possessed by dark musical visions. A fitting close to the "show" and a consummate performance by the band.

I hope this rant about the Jefferson Airplane CD, 'Sweeping Up the Spotlight, Live at the Fillmore East 1969" encourages the readers who have it, to dig it out, and who don't to hunt it down. The CD is a great capture of the band with its quintessential lineup, during a period of great fertility, and just before its eventual end. Everything that is great about the San Francisco bands can be experienced on this release.  Make sure you turn it up, because its needs to be played loud to be enjoyed properly. 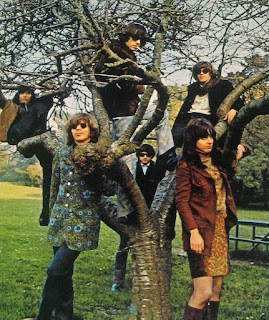 The Ballad of You, Me, and Pooneil-Sweeping Up the Spotlight
Posted by talkfromtherockroom at 1:49 PM