Spinning in the "rock room" today is a shadowy and distorted record that was released without much fanfare in 1968. It has since become a well respected and important part of music history. Released as a follow up to 1967's "The Velvet Underground and Nico", "White Light/White Heat" is a jagged and experimental follow up record in major contrast to many other rock records of the time. Filled with innuendo, feedback, dialog and funky electrified madness, this LP is more of an experience than a common listen. The "Velvet Underground" are easily one of the most influential artists in rock history, and this record was the antithesis of the norm of the day. It's odd instrumentation and strange lyrical content separated it from the rest of the rock world. The sound of the record is peculiar, with a low-fi vibe mixing with a charged dynamic energy completely modern. This is a vampire record, that waits in the shadows, hides its face, and stays out of the daylight. Bleary eyed and druggy this record has a unique personality all its own.

I am listening the MFSL version of the LP which shimmers with a charged electric energy. The opening track "White Light/White Heat" quakes with an amphetamine shake, the piano crisply rippling over the distorted and hot instruments. Lou Reed's guitar a snow filled television screen stuck between channels, images faint and flashing, yet static and shocking. An edgy opening to the LP and classic "Velvets" influential and forward thinking.

Following the opening track comes the first epic of the album, "The Gift" a narrative set against a funky altered improvisation decorated with a fuzzy John Cale bass and rambling Reed guitar. The story is a damaged tale of love where a rejected lover (Waldo) decides to mail himself in the post to his one and only (Marsha) to surprise her and win her approval. The package makes it to its desired location only to reach a dramatic and horrifying conclusion. I hate to spoil the far-out ending so I will leave it for the listener to discover on their own. The song, a mantra, chugs along hypnotically with only Reed's polluted riffing awakening its mesmerizing qualities.

Track three of the record "Lady Godiva's Operation opens with a beautiful Reed guitar line, that sings the vocal melody over the thumping groove set by drummer Tucker. Again, a tune with a different and unique lyrical content by Lou Reed, who is also the composer or collaborator of all of the songs on the record. The song sung by both Cale and Reed is a disturbing tale of a surgical procedure gone south. Complete with hospital sounds and deadly serious vocalizations throughout the track, the song is a fitting collaboration of the factors that make this record so dark and so good. One of the things that separates this release from others at the time is the black humor that is sprinkled throughout the compositions.

The last song on side one of the record is the Lou Reed sung "Here She Comes Now". The track brings to mind earlier Reed compositions such as "I'll Be Your Mirror" off of the "Velvet Underground's" debut LP with its delicate guitar figure, and light fingertip percussion. This song is in definite contrast to the abrasiveness of the previous songs. Again, the ambiguous lyrics leave listeners wondering what or who Reed is singing about. There are the obvious sexual connotations all over the song, so I'll just let the listener be the judge of the subject.

Side two opens with a straight razor guitar line that cuts flesh with the song, "I Heard Her Call My Name". The guitar drowns the rest of the band in feedback as the drums and bass sound like they were recorded in another room. Conventional backing vocals act in contract to the insanity and over driven guitar sounds being produced by Reed. The guitar solo like twisted metal, screams, wails, and cries, as it folds over on itself. At one point the bass drops out completely and Reed coaxes horror movie sounds from his ax. This is back alley rock defined, street rock, and in my opinion what would be the major influence on the upcoming punk bands of the 1970's. This is what rock and roll is all about, and should be, loud, defiant, and abrasive. The slick, produced sounds of today's so called "rock" seems like a bad joke when looked at side by side with band's like "The Velvet Underground" This is the real deal.

Because of the two longer epics on the record, side two only has one more song which is also the closing number. "Sister Ray". "Sister Ray" is a seventeen minute improvisation that was recorded in one take and included on the record. There is no bass on this song, only guitar, drums, and a highly distorted and perverted organ sound. Lou Reed spends the song "looking for his mainline" and the picture he paints is one of sexual madness, and getting higher than anyone else can imagine. The song is an orgy of sound, and bodies, of all orientations and fetishes. The instrumentation reflects the schizophrenic scene of sex, drugs, and debauchery. The music pulsates and melts into a primordial ooze that boils out of the LP's grooves. Reed scat sings over the chugging drone that continues to swirl and disorient itself. Morrison and Reed's metallic guitar strikes mesh like steel wheels in a rock and roll machine with Cale's belligerent organ, and Tucker's cardboard box drum strikes. "Sister Ray" changes tempo numerous times during the stretched out orgasm of sound but always tumbles back into some semblance of order. Until, finally it peaks, and then ends on a car alarm guitar note that fades to black.

"White Light/White Heat" is a record that is difficult to explain and encourage in words. The LP is similar to a physical piece of visual art, in that it requires study and contemplation as if it was a portrait on the wall. Much of the time I try to concentrate on the narrative, but as I do so there is absolute madness going on instrumentally underneath the lyrics. The album fittingly is as much about visualizations in the listeners mind as it is aural satisfaction. Due to Andy Warhol's connection with the group this makes complete sense. The record may not be for everyone because of its dark nature. It is a very "real" LP, containing for the time controversial subject matter. But for those who like their rock and roll, edgy, rough, noisy, and raw, the way it should be, this LP is for you. 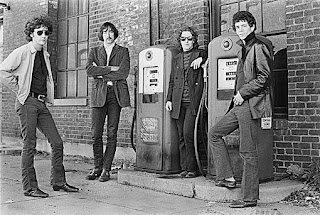 
Posted by talkfromtherockroom at 8:30 AM