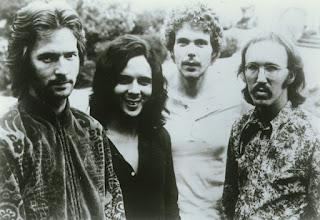 Today in the "rock room" I am enjoying a unique and powerful live concert recording. On August 11, 1970, shortly before commencing with the recording of the seminal "Layla and Other Assorted Love Songs" LP, Derek and the Domino's played their first and only concert at the 900 hundred seat Marquee Club in London, England. Only two months had passed since their debut performance, and this field recording captures the band in their infancy, exhibiting a fresh excitement and undertaking a chimerical performance.

The recording I am listening to is a first generation tape off of a mono reel master. This is another "put you there" recording, with major thanks going to the enterprising taper who had the foresight to record the performance. There is a smoky ambiance to the warm recording with all instruments audible and especially clear during the quieter numbers.This is the best sounding recording of this date to surface. The capture features the usual crowd chatter, and clicks and clanks, but all in all the recording is a aural time machine that no discerning listener should have an issue with.

After the MC's introduction of the band, the performance begins with a "cry babied" Clapton guitar intro that slithers into a swaying version of "Roll It Over". It's obvious what's on the band's mind, as the sexually charged song erotically tempts the ladies and assembled groupies in the audience. Bobby Whitlock's funky organ lays the foundation for the established dual vocals. When Clapton's first guitar break approaches it is prefaced by a scream, and then Clapton rips into his first solo of the night with an absolute fury. A series of accomplished trills with Clapton's signature 1970 sound reverberate throughout the club, and the energy level is palpable on the recording.

"Roll It Over" segues into "Blues Power" seamlessly with the band jumping on board at the same time. The rhythm section of Clapton cronie Carl Radle, and session man extraordinaire Jim Gordon push the chunky groove like a truck with one flat tire. "Blues Power" bounds forward powered by Clapton's electric washboard rhythm and Whitlock's sly organ flourishes.  Clapton swings into his solo spotlight with a slightly over driven tone, and displays his delicious crisp Stratocaster alternate picking. Comets of speedy arpeggio licks are spread around the venue like cosmic dust as Clapton scurries up and down the neck of his guitar. 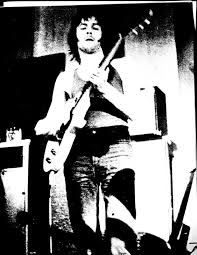 Again, without pause, "Blues Power" slips into "Have You Ever Loved a Woman" like a clandestine hand going up an unsuspecting skirt. Clapton is definitely heated up now as he pours sweet Brandy licks full of unrequited love out of his guitar by the cup full. His solo stings with a B.B. King like intensity, but obviously played with Slowhand's unique style. Clapton approaches the return to the lyrics with some warm bluesy tremolo action.  I think this may be a first time played for this song, I can't say for sure. What I can can say, is that Clapton's love of the blues both vocally and instrumentally is already fully mature for this early era performance. His off mic shouts and falsetto reaches are emphatic, heartfelt and strictly "blues". The show pauses briefly after opening with three consecutive non stop songs.

After a moment the band explodes into "Anyday", it sounds great, but this version is missing Duane Allman's signature slide licks that make the album version soar. Regardless, the "Layla" LP would not be released for another three months, and by the end of August the band would be laying down these songs for posterity, Duane not yet a twinkle in Eric's eye. I digress, back to the show, this version is highlighted by Whitlock and Clapton's perfect overlapping vocals, and a silky smooth organ breakdown, that peaks nicely. Radle's danceable bass line during the chorus is also a moment worth taking note of.

After an extended pause the band lays into the rare Clapton solo track "Bad Boy". "Bad Boy" is a sludgy swamp stomp through dark paths, as the group really digs their claws into this one. Gordon and Radle lock into a tight "Booker T" groove, and Clapton features his most aggressive soling of the night. There are plenty of shimmering vibrato filled scrubs across the fretboard by Clapton, who endlessly plays lick after disorienting lick. The mid song breakdown illustrates some of Clapton's "Cream Era" psychedelic soloing in a new context. An obvious peak to the set, and also the set closer, as E.C. announces the band is going to take a few minutes and come back for a second set.

The second half of the show keeps things stomping as "Bottle of Red Wine" roars as the opener. A concert favorite of the Domino's, for its straight rock and roll changes and celebratory nature, this version is no different and shows all band members having a good time and showcasing their chops. A dual vocal, drinking song, the band and crowd are again warmed up for the rest of the show.

Introduced by Clapton, who states that the song is "dedicated to a friend Jimi", the Domino's then preform the Hendrix penned song "Little Wing". Eric sings the shit out of "Little Wing" and then intensely deconstructs the melody in multiple and beautiful ways. The starts and stops of the tune are expertly timed and punctuated by the band. Again, Whitlock's organ swirls, whirls, and colors everything under Clapton's guitar. It's obvious to me from this version that Clapton is already in love with the song.  Stunning.
The band pauses for tuning, and then runs rough shot into "Tell the Truth". Like a deer caught in the crossfire the band positively sprints through this song breathlessly, leaping over anything in their path. There is no comparison to the studio version in regard of tempo. Clapton dons a slide for the jam that coalesces out of the Whitlock, Clapton "whooohoos", and does pretty well for it not being his tool of choice. "Tell the Truth", in my opinion, will benefit from its more patient arrangement in the future.

Clapton then gives the keys to the car over to Bobby Whitlock who preforms his own "Country Life" which would eventually appear on his first solo album. Tasty as a home cooked meal, the group chugs their way through the carnival keyboard changes of the tune. Per usual, Whitlock's vocals are rich and powerful like a ship's horn blasting through the room. The second set has been break neck, and confidently played. The crowd must be stunned, because I know I am, sitting here over forty years later looking at the cover art bemused.

Clapton brings the heat down slightly with a personal favorite of mine, "I Don't Know Why" a song penned by Steve Cropper and Bonnie Bramlett. The song is brimming with a gospel soul and contains potent vocalizations by Clapton and Whitlock.  Whitlock sings under and behind Clapton with impressive "Band" like vocal echoes pushing Eric into greater vocal gymnastics. The song embarks on its closing jam, rising higher and increasing in intensity, Clapton moving and shaking, rising, until suddenly the tape fades to silence. Ouch. I knew it was coming, but it still hurt, but I'm very thankful for the hour of music I got to enjoy.

There is a plentiful amount of recorded documents (roughly 20 out of the 60 shows they performed) available of Derek and the Domino's for those who search. This show in particular is a wonderful picture of an early period in their development, and contains incendiary playing for a small assembled crowd. Besides some small but unexpected aural blips along the way, the (M1-AUD) version of this concert is well worth checking out. Derek and the Domino's were around for such a short period of time, but the quality of their recorded work is unparallelled. Their live concert history is just as impressive, with a years worth of shows ranging from nights like the aforementioned, to the glorious November Fillmore East shows which spotlight extended and mature versions of many of these same songs. 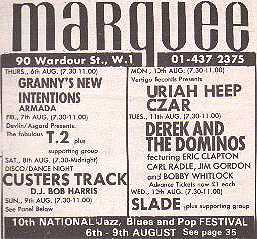 
Posted by talkfromtherockroom at 9:26 AM