Put the Boot In: "From Us To You" The Beatles Swedish Radio Show 1963 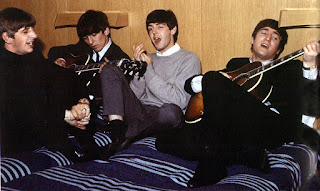 On October 24, 1963 The Beatles were young, hungry, and poised on the precipice of world domination. The radio broadcast from Swedish radio blasting through the rock room today is a glistening document of a band in the moments before Beatlemania hit with the force of an atomic bomb. The version I am listening to is a mono recording, and is possibly the "best" live recording of the Beatles available because of the combination of a kinetic performance, coupled with crystalline sound quality. A reported favorite of John Lennon, he considered this recording one of the finest examples of the Beatles before they lost the "hunger" imposed by their extraordinary popularity. This "boot" can be found under the title of "Stars of 63" as well as "Swedish Radio Show" which is the copy I have.

The featured set is fast, radiant, and well played. With the club days of the Fab four not far behind them, their playing is crisp, and contains an infectious enthusiasm. After being introduced to a cheering (not yet a screaming) audience, the band fires into "I Saw Her Standing There" with the instantly recognizable chugging silver metallic groove of the Fab Four's road tested beat. McCartney's bass comes through big and round bouncing like ball escaping a running child's hands. The Hofner dances under Paul's able fingers, years ahead of other bass players, containing a melody independent of the song. Lennon's Rickenbacker 325 clangs away with an amphetamine "Mersey Beat" expressing an urgent scrubbing chime, eliciting an electric washboard. Ringo, the best drummer in rock at this time, holds it down with his sure handed direction. Finally, George decorates the popping sound with his woody, bended guitar strokes. This is a band leaving streaming trails across the sky as they rocket to an unknown destination

"From Me To You" follows in perfect and beautiful harmony, an original, revolutionary in its sound, and arrangement. Two original compositions that considering the time, are towering advances in rock and pop song development. Following the impressive example set by the Beatles own tunes, the follow up with a glimpse into their own influences. The Bradford/Gordy track "Money (That's what I want)" that follows is a shredding example of how good the Beatles were in their early preforming days that are now only yellowed newspaper fragments floating on the windy breath of history. Luckily, fragments are caught and captured like this one. "Money" is a stout version, highlighted by Lennon's icy rasp, and trenchant vocalizations. The song opens with a great McCartney holler and then drops like pocket change into the groove, Harrison and Lennon's guitars mesh into a breathing electric mass that epitomizes "rock". When Lennon screams this track, you believe it, this is heavy!

Keeping up the same dashing pace the band shake rattles and rolls into "Roll Over Beethoven" on Harrison's spunky portrayal of the original Chuck Berry riffs. Starr is all over this one, hands on a clock, Starr swings around the kit in perfect simpatico with McCartney's smiling bass loops. Harrison gets his microscope moment in the set and makes the most of it with a pleasant solo and proper nasally vocals.

Introduced by Lennon, the group  now swings into "The Miracles', "You've Really Got a Hold On Me", a confirmation of The Beatles Motown influences. Tenderly sung by Lennon with great conviction and tone, the song is the genesis of the classic Beatles three part harmony featured in future Lennon/McCartney classics like "This Boy" and "Yes It Is". You can hear the smile in their voices during a slightly flubbed verse, classic. A highlight of the set and a benchmark performance by the entire group. A fitting microcosm of who The Beatles were and a hint of their future direction.

Back to the originals, the boys roll downhill on Ringo's tom tom's into "She Loves You", a song that retains its fresh relevance on this recording. It reminds me, believe it or not, of the importance of these early Beatles hits on rock and roll. A fact so overstated that it somehow becomes irrelevant. Regardless, the electric recording on this document injects "She Loves You" with something that makes me love it again, for what it was and continues to be.
The performance is closed fittingly with the Isley's "Twist and Shout" a clunky and chunky rocker designed to raise the crowd and rip up Lennon's vocal chords. Familiar to all Beatles fans, young and old this version stampedes the crowd, but leaves me wanting a bit more. Those Beatles sets were so short!

Anyways, this a great way to spend a twenty minutes! The Beatles, true professionals that they were, put forth an energetic and definitive show for their new Swedish fans. It's easy to see why Lennon enjoyed this recording, it shows them so green and unaware of the massive world that was about to open up for them because of their music. Dig this one up, its a reminder of what rock and roll was in its ever changing, yet basic and essential elements. 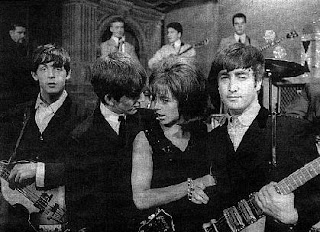 Posted by talkfromtherockroom at 9:40 AM