Jimi Hendrix: "Lord, There's Got to be Some Changes" -People, Hell and Angels 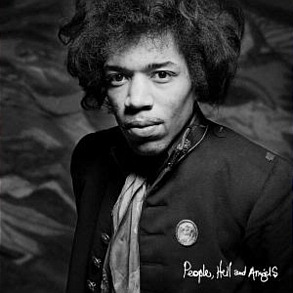 Uh oh, another Hendrix reissue? I found myself saying the same thing when I heard the word there was going to be another posthumous archive release coming out this March. Well, I got my hands on it this week, so of course, it is what's spinning in the "rock room" today. I'll admit I bought the compact disc version of this release, as I could not make the vinyl happen, so that is what I'll be reviewing here. The title "People, Hell, and Angels" is created on the theme of Hendrix moving outside the parameters of the "Experience" and mixing and matching with various musician friends. Many of the tracks on this release have been restored to their original "versions", with the tampering of post-Hendrix producers removed.  This is a proper release, and warranted, containing a few surprises for the hardcore, and familiar melodies for the newer initiates into the Hendrix catalog.

The collection opens with a late 1969 "Band of Gypsy's" version of "Earth Blues", unadorned, and stripped to its basic elements, a fitting opener to the set. Cox and Miles are locked in a earthy groove in which Hendrix's transistor radio funk riffs, shake off their electric fuzz. Nothing earth shattering, but a nice opener to the collection. An important glimpse into Hendrix's musical development in a era of constant flux.

The next track "Somewhere" is a different beast altogether. Whereas the first track "sounds" like an outtake to these ears, "Somewhere" sounds like a fully fleshed out composition. Featuring Stephen Stills an bass, and Buddy Miles on drums, this version of "Somewhere" is unaffected by insensitive overdubs, or meddling producers hands. Hendrix flows through the lyrics rhythmically, like a stone skipping across a glass lake. He pours liquid wah wah notes in between verses that develop into an uplifting melodic change at two minutes. A levitating and rotating major key riff floats inches above Stills melodically slithering bass underpinning. Quickly changing, the jam shifts into a swinging bluesy climax that slickly slides back into the body of the song. A searing series of instrumental highlights fill up this early track on the collection.

The next song is recognizable for its inclusion on numerous Hendrix's releases, and rightfully so. "Hear My Train A Comin" is a song that anyone would be hard pressed to find a bad version of. The performance included here is from the first "Band of Gypsys" session on May 21, 1969. While not as extended as some live versions, there is a palpable enthusiasm quaking throughout this studio recording. Buddy Miles plays with a bricklayers hands, as Cox per usual, is attentive to every slight twitch or look Hendrix gives, with melodic ideas as endless at a Delta country road. At around four minutes Hendrix starts to unravel, and hits a country blues groove as thick as maple syrup, real blues. Wow, another Hendrix reissue? Yes, please. Keep finding these rare goods, I'm sold!

From the same session a funked up, juke joint version of "Bleeding Heart" follows. Punctuated by "Have mercy!" yells, and Delta flavored off mic hollers by Jimi, this is the real deal. A completely unique version according to the liner notes, and a special one confirmed by my ears. Slowed down, with every nook and cranny investigated, this is also a spectacular find.

The next song "Let Me Move You" is a Hendrix original and comes from a March 1969 Record Plant session, and features Lonnie Youngblood on saxophone and vocals, and Jimi on "public saxophone". Playing with various backing musicians Hendrix psychedelically surfs over the top of the shimmying soul stew being layed down. This song is a prime example of the direction that Hendrix was drifting toward, with a more "big band" feel, reminiscent of a group such as "Electric Flag". This one is hot to the touch, with Jimi's quicksilver guitar spraying shots of creative ideas, that spring from an endless multicolored well. This number approaches seven minutes, and there is plenty to be digested in this version.

The cut of "Isabella" that comes next was recorded after the "Gypsy, Suns, and Rainbow's" experiment the occurred at Woodstock. Hendrix's "big band" recorded this version of "Isabella" featuring Larry Lee on rhythm guitar and two extra percussionists, two weeks after the festival. The song has a elastic and loose groove, in contrast to the eventual 1970 single release. While not a "definitive" version, a nice glimpse into Hendrix's creative song development, and a view of what "Isabella" sprouted from.

"Easy Blues" is another one of those songs that make this collection so worthwhile. Recorded at the same session as the previous track, this selection again uses Hendrix's Woodstock line up. The instrumental track saw a release previously on the deleted Hendrix LP, "Nine to the Universe". The version on this set in unedited and extended. Based around a jazzy Billy Cox bass line, and jumpy Larry Lee rhythm guitar, Jimi plays some slow watery licks that develop into mid tempo swing, and eventually into a ambling rock jam, peaking out with a series of repetitive treble filled Hendrix screams from his Stratocaster. The band sounds much tighter here than their Woodstock performance, with the intimate confines of the studio most likely adding to their chemistry. Mitch Mitchell's diverse and multilayered poly rhythms, playing tag with Hendrix's jumpy riffing is a wonderful highlight.

Following "Easy Blues" comes the track "Crash Landing", a song which was completely dismembered for the posthumous LP release of the same name in the mid 1970's. Again, featured on this set is the original April 1969 recording untouched from the way it was recorded. Layed down with Billy Cox and "The Cherry People", this embryonic version of "Freedom" is a tempo shifting groove fest. At a bit past two minutes Hendrix groans a series of prickly engine noises which make this version worth its wait in gold. Another beautiful choice for the set by the powers that be.

Following "Crash Landing","Inside Out" is a song that hails from June 1968, and features Mitch at the drum stool and Jimi on guitar and bass. The track is a hybrid of some of the tempos that would become "Ezy Ryder", and also from the Experience cover song "Tax Free". Basically an instrumental jam,the song is interesting because of Hendrix playing both bass and guitar, his multiple abilities on full display. Highlights include virtuous moments on both stringed instruments, and Mitchell's always fascinating quilted drum patterns.

"Hey Gypsy Boy" comes from a March 1969 session and unlike much of the rest of the collection does sound like they may have scraped the bottom of the barrel a bit with this track. Now, I am of the opinion that all Hendrix is good Hendrix, but this early version of "Hey Baby" feels slightly out of place nestled amongst the other items on this set. It does feel like a practice more than even a take, but still has a few great moments that all Hendrix lovers will take solace in.

Beginning with some muscular tribal drum hits, the "Ghetto Fighters" "Mojo Man" was gracefully adorned by Hendrix when the "Ghetto Fighters" came to lay some vocals down for Jimi in August 1970. Hendrix then added his signature style to the already painfully funky track. Brimming with feedback laced notes that dance tunefully over the driving soul of the band, Jimi fits into place like he never stopped being a sideman, with respectful, dynamic, and mind blowing playing. Jimi is part of the band on this song, but also showing off individually with some of his most mature playing on record.

The collection closes with a short "Villanova Junction Blues" recorded May 21st 1969 with the Gypsy's line up featured elsewhere on this collection. This is a work in progress, but acts as a fitting conclusion to the "People, Hell and Angels" set. Slow and moody, the band works on the changes as Hendrix riffs around probing the landscape for new life. There is a certain poignancy to the song in this infantile state, unfortunately right as Jimi starts to increase his riffing the track fades to black.
The new Hendrix archive release exceeded my admittedly low expectations for yet another posthumous collection of music from Jimi's lightning strike career. I do recommend the set for any Hendrix fan who was on the fence regarding another anthology of rehashes. I have been intensely surprised by the new inclusions on the set, as well as the "Let Me Love You", and "Mojo Man" tracks which contain the usual jaw drop moments. I am not sure if there can possibly be anything left to release with the exception of live performances, as I was doubtful before the appearance of this collection! If we do not see another release, this set is a fitting conclusion, because Experience Hendrix did not sacrifice any quality by digging too deep, and releasing total crap. This set nestles nicely along side the other Experience Hendrix anthologies, which pay the proper respect to his studio outtakes and live shows. Put any doubts aside, and feel confident that there is still one good release to come from the Hendrix catalog. You need this one. Famous last words for all "rock geeks" and collectors. 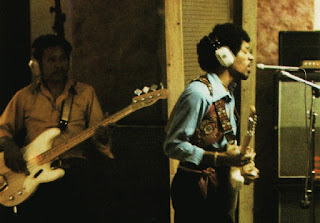 Posted by talkfromtherockroom at 6:59 AM