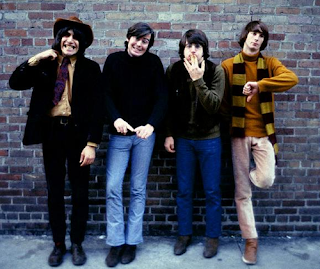 In November of 1966 the 'Lovin Spoonful' quietly created an influential LP that now examined through the hazy mists of time is seen as a inspiring and game changing release. The record "Hums of the Lovin Spoonful" is an eclectic and diverse album that deserves to be mentioned along other important musical creations from the era such as 'Revolver', 'Aftermath' and 'Pet Sounds'. Purposely designed as multifarious collection of songs, the album spans jug band music, folk, rock, country, and blues. The version spinning today in the 'rock room' in the mono LP version on Kama Sutra records. While running only 27 minutes, there is an expansive array of songs packed into a limited amount of time. Songwriter and founding member John Sebastian penned an impressive number of classic songs during this time period, a few of them being the four charting singles this album contains! 'Hums' is a refined collection of songs with one foot in the past and one foot in the multicolored future. There is not another album like it. Soon after the band would change line ups and Sebastian would eventually go on to have a successful solo career.

The LP opens with a husky metallic riff embellished with a warm meshing Steve Boone bass line that combines to create an 'electric jug band' groove. Hopelessly catchy, the track shuffles its feet across hardwood floors with the unique and kinetic sound created by an electric twelve string, and a Hohner Tubon keyboard. These instruments saturate the track with a aged but paisley vibe. Zal Yanovsky's unique country blues picking here, similar in tastefulness to the 'Band's' Robbie Robertson is just exactly what the song asks for without going overboard. Sebastian's smooth as glass vocals an obvious highlight, are ticklish and enticing.

The next track, 'Bes Friends' is ragged daguerreotype that contains a stand up bass, a trap kit played by Joe Butler, and Sebastian's antique harmonium that wheezes its way across the jumpy rag. The song is a blues, sweetened into a 'good time' juke by a heaping 'Spoonful' of various instruments and a back country holler by Sebastian. There is also a dusty squeaking clarinet that adds to the authenticity of the tune. This song is an absolute joy.

Continuing the broad range of the styles the LP represents, "Voodoo in my Basement" with lead vocal chores taken over by Zal, is a funky blues, reminiscent of the classic 'Smokestack Lightning' lick or the tune 'Last of the Steam Powered Trains" by the Kinks. Filled with clicking and banging kitchen drawer percussion and a hollow tribal drum thump during its change, 'Voodoo' charges forward with a sharp edge, stitched up by the fuzzy string bending holding the song together. Again, the tune is an example a traditional concept, rang out, and given its own special 'Lovin Spoonful' stamp for uniqueness.

Probably my favorite song on the LP and one of my most beloved Sebastian tracks, "Darlin Companion" is arguably one of the first examples of 'country rock' which can also be recognized in the Beatles track 'What Goes On' and the Byrds 'Time Between' both released in 1965 and 1966 respectively. Eventually covered by Johnny and June Cash in 1969, 'Darlin Companion' is pure 'chewing on straw' country with a quintessentially 'Spoonful' groove and a melodic pop sensibility. Containing echoed finger picking and a scratchy brushed drum rhythm, the song brings to mind Presley and Cash's 'Sun' era bands. The song a country train on an open plain, the group is tight and on point. Kudos to Yanovsky's chorused guitar licks that melodically answer Sebastian's vocal lines at every turn of the tracks.

Already having covered some blues and a bit of country, "Henry Thomas" contains a slide whistle played by Zal, and the ocarina played by Sebastian in a rollicking purist jug band jam. The song also contains some whining harmonica licks by Sebastian which add to the expansive foot stomping swing. One of the most unique tracks in the Spoonful's catalog, "Henry Thomas" is a tune unlike anything found on any rock albums from the era. A homegrown homage to the bands early influences, and a back porch stomp.

Side one closes with pure and simple pop with the Sebastian/Boone co-written track "Full Measure". Starting with a rich pulsing piano line the song contains echoed and layered response vocals and a quintessentially 1960's pop groove. The most blatant expression of straight 'pop' on the LP its placement closing the first side is perfect. The song is also notable for Boone taking over lead vocal duties.

Flipping the LP, side two begins with the classic "You and Me and Rain on the Roof", a song found on every oldies channel in the world because of its delicate instrumentation and easy going melody line. Regardless of its popularity and exposure the song continues to be an exquisite example of the groups multiple instrumental talents. The acoustic guitar chiming with cloud splitting sunshine, and Zal's muted electric, dripping like the rain dancing down cracked glass.

Keeping with the theme of mellow melodies, "Coconut Grove" trickles in again spotlighting special instrumentation such as Sebastian's auto harp and a hand drum. According to John Sebastian this song was conceived on folk icon Fred Neil's boat in the pre-Spoonful days. The song rides rolling waves of sound, gently rocking to and fro, the breeze of Zal's guitar gusting beautiful accents across the reflective seas. The strength of the tune is Sebastian's vocal melody, almost able to carry the track on its own. This song can put you right on the deck, riding straight into a sun dipping behind the horizon. Mood music at its finest.

The tempo picks up quickly as "Nashville Cats" begins on a chunky muted string strum. Another purely country jam, this one sways like clean sheets on a spring day clothes line. A tribute and remembrance to the inspiration of the early Southern guitar masters and the early "Sun" sides. Sebastian's amateur pedal steel licks during the chorus deserve special mention for their beautiful addition to the song. Sometimes not knowing how to play an instrument is the best way to make it speak in a new and interesting fashion.

The final two tracks of the LP are also the hardest rocking. The first song is "4 Eyes", Sebastian's remembrance of being made fun of and bullied for his spectacles as a youth. Beginning with a fuzzy distorted lick, the song takes off riding on Zal's sprint across ice slide work, and Boone's R and B influenced bass lines. "4 Eyes" moves seductively in a way that most of the Spoonful's American contemporaries could not jump on or get a grip on, unless they were a member of the famed "Wrecking Crew". This one makes it swing, all that's missing are the go-go dancers in the cages!

The final song is also arguably the Spoonful's most popular and well known song, "Summer In the City". Brimming with everything that makes a hit song a hit, melody, a hook, great vocals, and a lick, "Summer In the City" has it all. The piano riff that pulls it all together, Sebastian's emphatic vocal delivery, and singable melody hook that once in your head will not leave. The song still sounds as fresh today as it did in 1966, even the traffic sound effects do not sound too dated! A fitting closing to an influential and immaculate collection of tracks.

Despite their pop sensibilities and impressive number of hit songs, the "Lovin Spoonful were not just a "hits" band or a "teeny bopper" group. Deeper inspection of their catalog reveals a diverse and creative group who were constantly in search of new ways of expressing their music. Whether through experiments with strange instruments, unique genres of music, or differing ways of production, the group and principal songwriter John Sebastian were always on the prowl for something special to share with their audience. The LP "Hums of the Lovin Spoonful" is the apex of these practices, and a conglomeration of the influences and techniques they band developed over their time together. In my opinion "Hums" is one of the great records of 1966, often missed and underrepresented, but always there for those willing to search for melody, experimentation, craftsmanship, and "good time music". 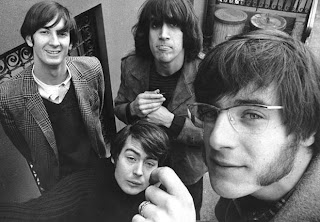