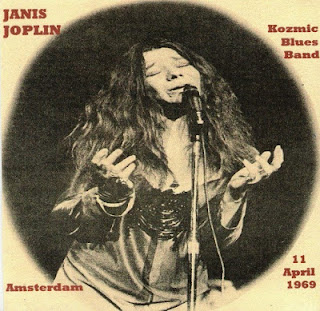 In the 'rock room today' I am listening to a cuddly warm FM broadcast of Janis Joplin and the Kozmic Blues Band live in Amsterdam 1969. This recording was rebroadcast on Dutch radio in 2006, and that is the version featured on the bootleg I am enjoying. Janis had put together the Kozmic Blues band because of a longing to take her music into a new and soulful R and B direction. Putting the psychedelic days of 'Big Brother' behind her (with the exception of guitarist Sam Andrew) Janis brought the 'big band' together to portray a more organic side of her music.

This capture finds the group on their European tour, playing tight practiced shows after an introductory tour of various venues in the states. The band swings with a 'Stax' R and B attitude helped along by the groovin three piece horn section. Janis is in fine throat despite the perils of her impending heroin addiction and she sings here with her usual aplomb, reaching stratospheric gritty falsettos, and deep sludgy groans and moans. Her vocal gymnastics a refection of the emotion pouring from her troubled soul. The show is a clandestine peek at the direction Joplin would be taking her new music. Similarly to her musical peer Jimi Hendrix, who would also meet a premature demise, the possibilities of her future development are thought provoking and endless.

The performance opens with a throbbing instrumental that spotlights the horn section, who weave solo segments above the oscillating funk of the rhythm section made up of bassist Brad Campbell, and drummer Brad Markowitz. Elvis Presley's late 1960's and early 1970 performances come to mind as the backing band would usually open with a cooking instrumental setting the table for the Presley to appear and rip into the opening number of the show. The same occurs here as Janis can be heard exclaiming, 'All right' after the opening number, preparing for the heated and sweaty of 'Summertime' that follows. The horns, guitar and organ coalesce into a regal sounding introduction that knots itself around the prelude of the song. Janis comes in with her stones and gravel vocals, gravitating between a rough and ready shout and smooth soothing Southern Comfort coos. The band scurries across the melody lines with quick shots of color and pin prick riffing, above it all Janis lets it go. As steamy as the late afternoon sun, both Janis and band elicit a warm summer breeze created from their musical closeness.

'Try (Just a Little Bit Harder)' follows, and opens on a bass pulse and percussive maraca accents. Slowly building in intensity,there are some sly guitar and snare rim shots, Janis slinks in through the back door, seductively asking her man to 'try' just a little bit. Until she decides that asking nicely doesn't work, so she erotically caterwauls from a lofty apartment fire escape for all the city to hear. Squishy keyboards and chunky guitar form a musical circle around Janis. Hip falsetto vocals by the band sit in contrast to Janis's superior sandy and gritty lines. The song breaks down into a call and response vocal segment that really gets things moving. Janis wails and screams, raps and squeals the band into frothing maelstrom. This aint' no modern day diva vocalizing, this is the real deal, a back porch blues jam or a sunset field holler. Not to knock modern day female vocalists, but none of them can hold a candle to the 'from the gut' vocalizations that Janis is pulling from her pipes. No theatrics needed. Wow.

Next up, Janis breathlessly introduces horn player extraordinaire Cornelius 'Snooky' Flowers to the audience and chats briefly. 'Snooky' steps into the spotlight for a moment to take the lead vocals on a careening version of Otis Redding's 'Can't Turn You Loose'. The band shakes and rattles on this one, with 'Snooky' really digging into it vocally, containing some great off mike and on mike asides by Joplin. Similar to a 'Grateful Dead' primal era 'Lovelight', Janis and 'Snooky' let the band groove as they rap, scream, yelp, and groove around the pulsating rhythm whipped up for the seven minute jam. This song is a prime example of the 'soul' direction Joplin was racing toward as she left the psychedelia of 'Big Brother' in her rear view mirror. Big horn blasts with swirling organ are the bedrock in which the jambalaya of soul is built.

The performance does include a 'trip' back to the heady days of Joplin's psychedelic grooves with a 'big band' version of  'Combination of the Two' complete with a fuzzy heavily hallucinogenic Sam Andrew guitar breakdown. One of my favorite Janis songs because of the delicious groove and celebratory vocal overlapping. A funny moment occurs when the song hits its opening groove punctuated with falsetto 'Ohh's", and the soundboard recording picks up Janis's struggle to hit the note. This does not last for long as shortly after, she shreds her vocal lines with unparallelled intensity. A cool moment just to witness the usually infallible Joplin hit a slight clunker. The tasteful addition of the horns again take this swinging tune and turn into a hot to the touch R and B review.

In my opinion the highlight of the performance comes next with a snapping, stuttering, and screaming version of 'Ball and Chain'. Janis's apathy for the European audiences during this tour has been well documented, and I feel that performances like this one show the effort she put forth in getting a reaction from the 'cold' assembled crowds. The weighty version of this song clanks like a welded chain link as Janis scats and yelps along in sandy ecstasy. The bands tasteful movements swell, accessorizing her every move with musical dynamics. The band becomes a musical river ebbing and flowing with Janis's every whim, tumbling and slamming into musical debris. Joplin's breathy vocals coming through crystal clear on the FM broadcast recording, a beautiful gift to be treasured.

'Ball and Chain' segues seamlessly into the show closing 'Piece Of My Heart', the expected and well played closer. The chorus is emphasized by horn blasts and cymbal crashes, the band putting a new twist on an oft played and well recognized classic. Janis, per usual sings the shit of what many consider to be her biggest hit. The crowd explodes in recognition as the performance concludes, Janis definitely content in her job of waking the coolly detached European audience.

While there are numerous Joplin performances available released both officially and through bootlegs that may equal or surpass this performance, I have a special love for this show from Spring 1969. It finds Janis in a period of flux, and a period of personal turmoil. But yet her stage persona shines brightly like the solitary star her soul portrays. Her voice still inspiring chills and her musical effort and love unquestionable. The band acts as a breathtaking and ornate picture frame, surrounding the priceless art that is Joplin's muse. Dig this one out of the vault for a captured moment with a woman who at this point in time was the greatest female vocalist the rock world had ever seen, and who's legacy remains forever carved in rock. 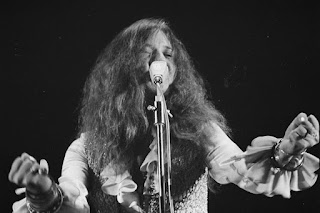 Posted by talkfromtherockroom at 5:28 PM