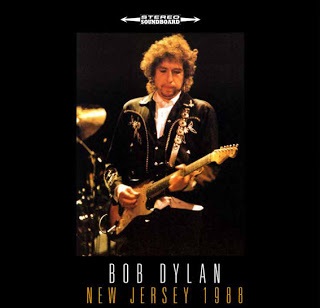 Today I have decided to dive into an era in Bob Dylan history where his bombastic live shows set the table for the 'never ending tour' that continues to this very day. The year 1988 is where the very roots of the so called 'never ending tour' can be traced. A year of redefining and rediscovery for Dylan, regarding both his deep catalog and himself. Performances from this era are known for the ragged knife edge electric sets, and the intimate soul stirring acoustic sets featuring just Dylan and G.E Smith.

The show I am enjoying is from the second leg of the first group of performances and hails from the opening night of a two night stand at Jones Beach Amphitheater. The band that Dylan assembled for this tour is one of his most stripped down line ups, but also the most in your face, including drummer Christopher Parker, bass player Kenny Aaronsson, guitar player of Saturday Night Live fame G.E. Smith, and of course Dylan on rhythm guitar and vocals. The band is a gritty R and B group with a punk attitude injecting intensity and strut to even the most placid of Dylan compositions. The same is true for the acoustic sets, with each set from the tour feeling like newly discovered ancient scroll. The performances are somewhat truncated, in relation to previous and even later Dylan shows, but this trade off is worth the deep investment that Dylan and band illustrate almost nightly. Dylan's vocals are much improved from the 1986-87 tours and there is a confident punch and delicate touch to his delivery. The 'never ending tour' is littered with great shows to be discovered, but these early 'NET' concerts emit an air of newly found confidence, renewal and a regal demeanor.

Opening with the sounds of a typically rowdy NY crowd, Dylan swings into a jagged rockabilly version of 'Subterranean Homesick Blues'. Smith's guitar licks elicit the mid 1960's excursions of Robbie Robertson with the kinetic and electric strings shooting across the aggressive rhythm section. The band gets 'down in the groove' as Dylan spits his lyrics into winding tempos. A flashbulb quick version, the band then promptly plays a tour premier of 'Just Like Tom Thumb's Blues' that moves at a breezy tempo tracing chalky Mexican landscapes. The song is crisply executed for a first timer, and the band rides tit like a familiar old horse.

The version of 'Your A Big Girl Now' that follows is a highlight of the show for me. It's  a dynamic version that includes syncopated and emotive Dylan vocals that he rings the emotion out of like a soaked washcloth. The series of lines beginning with, 'I'm just like that bird, singing just for you', is a wonderful example of the experimental poetic tempo Dylan applies throughout these 1988 performances. Lyrics are stretched, growled, and cadenced so they are not only sung, but they act as a melodic instruments and ornate modifiers to the music. Draped across antique chairs and hung over pale windows Dylan's vocal timbre envelops the songs. The attentive instrumentation magnifying and framing his voice.  The vocal technique applied by Dylan coincides with his new found and practiced guitar approach, both being responsible for his energetic rebirth. Smith's screaming and strained guitar lines are the perfect accompaniment to this re-energized and reborn Dylan. Must hear.

The 'Tangled Up In Blue' that comes next excels from this band line up, the song moving deliberately with the able accompaniment of Parker and Aaronsson. A clenched in the pocket version is put on display, with ringing guitar its most prominent feature. Dylan puts a 'hip hop' spin on this version of 'Tangled' with every beat and punctuation given a flavorful twist.

Following the speedy 'Tangled' comes a hypnotic and chunky 'Masters of War' performed in its electric guise. This is an ominous version full of drama and intrigue based on a metallic call and response riff that works in conjunction with Dylan's vocal lines. Smith gets to let loose with a couple of sustained and war worn guitar solo segments that increase the intensity. After a stirring version of such a heavy song, Dylan follows with a sparse and airy 'I Shall Be Released'. Sung with an stern but tender care Dylan is completely invested in this performance. Built around a rock solid beat, this is one of the better version's of the Dylan classic via the Band that I have ever heard. At the conclusion of the song Dylan can be heard replying, 'How'd I do baby?' I can assume that this song was a either a request or special performance for a lady friend of Dylan's backstage or in the audience. Good stuff.

Surprisingly the version of 'Stuck Inside of Mobile With The Memphis Blues Again' that follows is breathtaking! The only reason I say surprising is because there are many versions of this song available for those who search, and it is a track that Dylan can sometimes 'mail in', in my opinion. Here, Dylan is on fire with a emphatic vocal delivery that harkens to his 1966 live vocal displays. What starts as a normal textbook version soon develops into a thrilling race through the songs changes with Smith taking over for the second guitar solo with a thrilling 'chicken picking' segment that is followed by a  stunning series of bends, trills, and stops. The delivery, solo segments, and tight bass and drums add up to a definitive version, and one of my all time favorites.

The time has now come for Dylan and G.E. Smith to don their acoustic guitars for the highly anticipated acoustic segment. This tour was full of surprises during the 'unplugged' section, and this concert is no different. The first song played is a heart thumping version of the traditional 'Lakes of Pontchartrain'. This is the kind of 19th century ballad that runs through Dylan's veins and fuels his muse. The song sways as a flower caught on a gentle breeze, moving organically on the twin acoustics, and Dylan singing as if from far at sea, and from another time and place. A beautiful moment captured for posterity by a enterprising taper. The crowd reciprocates in kind, realizing they have witnessed a special performance.

Dylan continues the acoustic spotlight with a version of 'A Hard Rain's A-Gonna Fall' played to its true arrangement for the most part. Dylan injects a new life into every lyric, with the crowd hanging on every poetic word. Similar to any poet, Dylan's pauses, breath, and enunciation make the song what it is, he improvises lyrical dances from inside, like a jazz musician would with nimble fingers, or measured breaths. The conclusion of the song includes an short epilogue of intertwining and twinkling acoustic guitars, again stating the melody, to which a shout from the audience screams, 'Beautiful!'. I couldn't agree more.

Another rare performance comes next with Dylan breaking out the traditional Irish folk ballad 'Eileen Aroon'. Performed almost solo by Dylan, (light accompaniment from Smith) like he was standing in a dim smoke filled club in the East Village fresh from a train coming in from the Midwest. This is the kind of performance that encourages introspection, silence, and emotional searching. This performance is enough to seal the deal for the entire concert. Listening to this I realize why these 1988 acoustic segments are so highly though of, and will proceed to dig into the entire tour to enjoy lost performances that I may have missed. Such is the life of a 'rock geek'. The closing of the acoustic portion of the show comes with 'Boots of Spanish Leather'. Played at a tempo more accustomed to say 'Don't Think Twice', 'Boots' moves through smoke like a campfire singalong, but loses none of its emotional strength in this slightly different arrangement. Not to be redundant, but this is another radiant acoustic number, giving even greater prominence to Dylan's troubadour status, and reintroducing the crowd to these historical numbers.

The home stretch of the concert begins with the second electric set opening with the Robert Hunter and Dylan penned 'Silvio'. A song that in my experience you either love or hate. I personally like it, and feel that slots in perfectly as the kick off song for the second half of the show. Mostly unremarkable, but a cooking little rock number nonetheless.

Next, a unique arrangement of 'Gates of Eden' bordering on the edge of dread, bursts forth on thunderous and clattering drums. One of Bob's most beloved melodies stays intact through the percussion filled performance, and is actually magnified through the looking glass of this penetrating musical display. Dylan's stinging delivery fits with the moody attitude of the group, and the crowd can be heard pushing Dylan's vocals to greater heights. A fist shaking full band electric version, and one of the most intense moments of the concert.

The concert continues with big versions of big songs, and signals the race toward the finish line with some of Dylan's most respected numbers. Without a pause, Parker's snare hit ushers in 'Like a Rolling Stone', we all know the importance and power of this song, so I will save my breath, but I will say the song stays true to the standards set during this entire performance. The acoustics come out one more time for a tender always relevant 'The Times They Are A Changin'. Sung with great care by Dylan, this is one of those nights where it seems like Dylan is on a journey of self discovery with every line that leaves his lips.

The show ends like a detonation with the closing duo of 'All Along the Watchtower', and the concluding 'Maggie's Farm. 'Watchtower' sounds slightly tired at first, but ignites with a first chorused Smith guitar solo, that gets the tinder blazing, and a second solo that bursts into flames. Rough and ready, I have to say that this groups versions of 'Maggie's Farm' are always funky fun, and this rendition is no different. It reminds me of the 1974 versions of 'Hollis Brown' with the Band because of its country lilt channeled into an amphetamine vibe (if that makes sense). The groove plays the perfect foil to Dylan's hiccuped and soulful delivery. The track gains a thicker swing as it progresses, with the band really feeling it, and finally slamming into the songs conclusion. The crowd explodes appreciatively for a few seconds, and then the recording ends.

This show is a perfect snapshot of one of Dylan's finest performing era's and the genesis of a tour that continues right up to this very day. An artist in constant flux, Dylan is a slippery slope who flashes inspirations quickly before moving on to his next project, band, movie, etc. This show is a definite peak for this era of his career. Dylan got an attitude, brought along a stripped down band as well as a renewed interest in his own back catalog. It's such a blessing to have captures like the aforementioned, coming from the tapers who's awareness and selflessness made them want to savor and immortalize kick ass performances. Digging out and enjoying this show has encouraged me to jump deeper into this fine Dylan era for things I may have missed and I hope it does the same for you. As always, thanks for reading and stay tuned for more rants from the rock room! 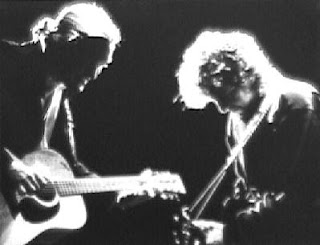 Posted by talkfromtherockroom at 6:49 AM