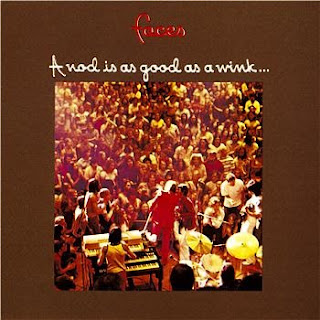 One of my all time favorite LP's, and in my opinion one of the best rock albums ever released is the 1971's Faces record 'A Nod Is As Good As A Wink...To A Blind Horse. Revolving on the turntable today is a copy of this definitive LP which has inspired this rant. Found smack dab in the middle of Rod Stewart's astronomical solo success, this record propelled 'Faces' to the same sort of popularity. There were few bands that had such a collection of talent and songwriting abilities as the Faces during this era. If you not heard this album I suggest that you do so, if you have, what I'm about to say should be of no surprise to you.

Opening on the instantly recognizable chunky funk of Ronnie Wood's original slashing riffs, Miss Judy's Farm jumps from my speakers with a bad ass strut. Woody's riffing would soon be supporting Keith's Richards in the Stones by the end of the year 1975, but at this point he was the solitary guitarist responsible for all of the Faces timeless, head bobbing rock riffs. Running side by side with Ronnie 'Plonk' Lane's knotty bass lines, and Kenny Jones hardened groove, the Faces had a boulders weight of thick rock rhythm. Rod soon jumps in with a gritty spitting vocal that only he could pull of, edgy and seductive. During the break down of 'Miss Judy's Farm', Woody, Lane, and keyboard extraordinaire McLagan cascade, tumbling over each other as they slot into their respective places, funneling into a racing Chuck Berry modeled groove. The track slowly smolders into a thrashing, drunkin stomp that builds to a proper climax and finishes promptly.

The naughty Lane/McLagan composition 'You're So Rude' runs in from the rain on carnival keys, like a voluptuous woman in a soaked white t-shirt looking for shelter. McLagan's spongy Wurlitzer adds to the drama, as Lane 'raps' about a tryst that seems to have gone in the wrong direction due to some unexpected intrusions. Woody solos through the entire song with a chilly melody all his own, as the rhythm see-saw's excitedly, draped with some additional harmonica and keyboard flourishes. A fun and funky two track lead off for the LP.

The first 'ballad' of the album comes with the Stewart/Wood/Lane composition 'Love Lives Here' that begins with skipping stone snapshots by McLagan that illicit magical gardens, high times, and crisp spring air. The song lyrically is one of reflection, the deconstructed home a metaphor for the love that will continue to exist in the narrators memory, yet musically it expresses optimism through its luminous instrumentation. A beautiful and emotive track that is hidden by the strength of the songs around it, and through the passing of years. A true collaboration and expression of the wealth of musical ability held in the 'Faces'. One of those songs that remains hidden in the track listing of a great album, a surprise every time you listen to the record.

'Last Orders Please'  opens on a 'Band' like opening guitar riff, and expresses that kind of freewheeling joyous back country vibe. Lane's honest and earthy vocals reveal a thousand differing emotions, similar to a storyteller spreading his knowledge and tall tales to people of the village. Kenny Jones stomps a brick layers beat to which McLagan sprinkles barroom acoustic piano dressing on top of the foundation. In my mind I hear clinking glasses, see long legs, dim lights, and thick smoke. When I hear 'Faces' tracks like this one, its hard for me to think of another band that plays straight 'rock and roll' as well as they do!

The first side of the LP concludes with 'Faces' most well known song, and one of the most accomplished 'rock' songs of all time, in my humble opinion. 'Stay With Me' has got everything you could ask for in tune , jangling piano, slashing jagged guitar, thick ropy bass, and definitive vocals. Opening on the racing knife edge Woody' guitar line, Jones, then Lane, then McLagan all join in, slinking into the irresistible dragging, hip swinging, lip licking beat. Woody slithers some sneaky slide guitar echoing Lane's snapping and popping bubblegum bass line. Rod interjects some yelps, falsetto wines, and tastefully egotistical and masculine lyrical content. I think to myself, 'They don't build em like this anymore'. The song navigates through its groovy changes then hits high gear as it accelerates back into the opening figure, spotlighting a Jones drum break, and a McLagan segment played with his addictive Rhodes tone. The band slams into the wall, jumps medians and blasts through the red light to conclude the song. A timeless close to one of my favorite side A's of all time.

Side B begins with the count off for 'Debris', a Ronnie Lane classic written for his father and an expression of why Lane will always be referred to as the 'heart and soul' of the Faces. As the song begins with Woody's angular acoustic strokes, the warm twinkling keyboard lights and Lane's sliding melodic bass line, something unusual happens, the instruments become one, and the song takes on life, breathing and sighing then soaring as an singular entity. It's a euphoric feeling, Lane's vocals have never been more true, or more soul stirring. Woody's penchant for hitting the right lick at the right time continues with the scrumptious opening statement and additional filigree's played low on the neck. Stewart joins in with Lane on the chorus for high harmony's taking the middle section to even loftier heights than the verse. When Woody glides into his solo spot with a twirling melodic decent its chill inducing, leading up to another Stewart/Lane glorious vocal intertwining.

A proper follow up to the 'heavy duty' reading of 'Debris', the band sink their teeth into a raunchy version of Chuck Berry's 'Memphis, Tennessee'. A concert staple and a favorite of the group, this version rolls like the wheels on the bus, gaining momentum on the hills and curves. Woody pours some sugary sweet riffs using a slightly chorused tone on his ax that loans his sound a shimmery shake. Rod is his usual 'right on' self, singing the song close to the vest, but adding his own unique flavor. The conclusion of the song is a spotlight for McLagan and Woody to show of their rock and roll chops, while Kenny and Lane hold back the water from the breaking the dam plugging it with  well placed fingers.

There is no slowing down on Side two as Mac drops the opening to 'Too Bad', another 'romp' created by the heads Rod and Woody. There is an interesting shimmery sharp metallic sound Woody coaxes out of his guitar on this one! (Strat?) The entire group joins in on the chorus with that intoxicated Faces vocal blend, often found during acappela live on stage meetings. Mac's heavy left hand keeps this one moving at an accelerated pace as Stewart 'bar shouts' the lyrics over the top.

The side and the LP close with one final Wood/Stewart song, 'That's All You Need'. The song reminds me of the groups first 1970 'First Step' LP excursions, 'Around the Plynth', and 'Pineapple and the Monkey'. A solitary kick drum supports a vocal and guitar duet with Woody and Rod, that is a prelude the tribal verse that develops. The song transitions into a Ronnie Wood slide guitar spotlight and eventually a full on extravaganza of musical prowess by all of the band members. I wish Ronnie Wood was offered the same opportunities to shine when he joined up with the 'Stones', but they already had their 'stars'. Anyways, lyrically the song asks the philosophical question, 'Don't it make you happy?' Well then, I guess, 'That's all you need'. The aforementioned is repeated as a mantra during the ending of the song, as steel drums ring out the melody line and the group is hypnotized by their rolling jam. Thus concludes the record.

Faces 1971 LP, A Nod Is As Good As A Wink' is not a hidden jewel, it is considered by many to be their best LP, and is certainly their most well known. Released in an era when Lennon's 'Imagine' LP, the Stones 'Sticky Fingers' album, and 'Who's Next' among others were in the charts, the Faces studio creation offers just as much quality music as the aforementioned. I also assert that it also stays true to the basic fundamentals of rock music, it makes you feel good, wanna shake your ass, and wanna have a good time. No heavy preaching here, no secret messages, just solid grooves, true emotion, and well made music. 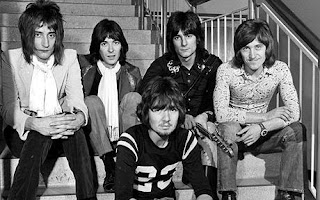