Put the Boot In: The Paul Butterfield Blues Band-'Dropping Out' Live at Fillmore West 1966 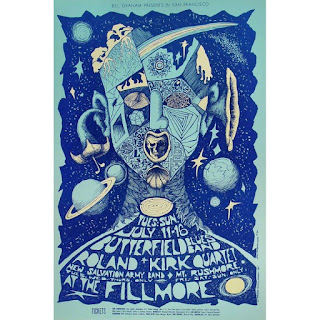 There are blues on the ceiling of the 'rock room' this morning emanating from a heavy live performance by the Paul Butterfield Blues Band shuffling like a sexy street walker from my stereo speakers. Hailing from the Fillmore West on September 30th 1966, this concert finds the band in the midst of their most revolutionary period, shortly after the release their influential LP 'East-West. The Butterfield Blues Band not was only leading the way with their introduction of 'Indian' influence and expanded improvisational movements to rock music, but they were also a mature blues band featuring a 'mixed' line up of race, almost unheard of for the time. The San Fransisco bands often looked to the "BBB" for inspiration and  the groups importance cannot be understated, and is reflected in the improvisational attitude of bands like the Grateful Dead, Jefferson Airplane, and Moby Grape to name a few, who looked to guitar god in the making Mike Bloomfield for direction. The expansion and development of cracking open songs and letting the contents fall where they may can be traced to the Butterfield Blues Band and their ballroom performances.

Obviously Butter is the axis in which the band revolves, his virtuosic blues harp playing some of the best the rock world has ever experienced, rooted in the abilities of Sonny Boy Williamson, Big Walter Horton, and Little Walter. This performance at the Fillmore West finds the group in their peak and ecstatic to be flaunting their plumage. The Butterfield Blues Band was a group that straddled the musical fence, touching toes into the sweet grass of psychedelia and improvisational journeys as well as keeping their other foot rooted in the earthy attitude of the blues. This concert features the six piece line up for the group with members Paul Butterfield (Harp Vocals), Mike Bloomfield (Guitar), Elvin Bishop (Guitar), Mark Naftalin (Keys), Jerome Arnold (Bass), and Billy Davenport (Drums). The recording I am listening to has an unknown lineage, but has wonderful presence, with all instruments and vocals coming through clearly and with consistent levels. It seems to be an audience recording, but sounds like in could be a straight line recording with light mileage. Regardless, it sounds nice, and feels good.

The concert opens earnestly on the fuzzy bounce of Bishop's guitar, presenting a 'Droppin Out' that had not yet been unreleased on LP. 'Droppin Out' has that rotund Butterfield band 'sound', but contains a fluttering melody that is helplessly 1960's. Bloomfield immediately comes out swinging with a stringy chorused solo that contrasts the spiked backing by Bishop and the rhythm section. The song concludes amongst a wash of feedback and squealing microphones quickly. A quick and fitting opener.

The band immediately jumps into 'Mother In Law Blues' a Junior Parker cover, and the band starts to slip into something more comfortable. Butter takes his first harp blast of the night and the temperature begins to rise, as the band percolates under his breathy accents. A series of twisting gusts carrying Butter's musical muse wrap around the song like a snake squeezing life from its prey. The second solo is Bishop, whose over-driven Gibson 335 takes a slightly different route than Butter cutting down dusty back roads to reach his chosen destination.

Following 'Mother In Law Blues' Butterfield introduces a song from the bands debut LP, 'Drifting', as 'My love is drifting'. Bloomfield now starts to take over the performance with a clinic of chorused, wormy lines that slither, booze soaked and quaking with the anguish of the lyrical content and Bloomfield's own personal demons. The breath leaving Butter's lungs is as emotive vocally as it is through his harp. The first solo by Bloomfield is a melting ice cube, sliding across a table leaving a trail of icy cool remnants behind. Davenport's drums skip like a happy child leaving school for the day, his jazz sensibilities lending a sturdy swing to a normally rigid blues beat. The band coalesces into one of the finest examples of the Chicago blues played flawlessly by a group of young white boys.

Next up comes a 'Born In Chicago' that brings the concert to a new level, and discovers the band locked in tight. Written by 'BBB' songwriter and comrade Nick Gravenities, the song features the chemical makeup of the Chicago blues, injected with a modern day sensibility. The start/stop groove comes out fighting against itself in a tug of war. Orchestrated, the three soloists Butter, Bloomfield, and Bishop mesh their musical gears into a conglomerate of blues riffs. The song then hits double time during Butter's crunchy harp soling, gaining momentum, eventually falling back into the oscillating body of the song. Butter and Bloomfield then initiate a tight embrace, winding themselves around each other for the second solo break. As the song races toward its conclusion Bishop takes a clean tone picking break that dissipates the tension, eventually joining with Butter for another musical meeting that brings the song to a gentle conclusion. Yes!

After the exciting 'Born In Chicago' the band enjoys an iced whiskey and smoke by putting the next track under a blue streetlight with a soulful take on 'Willow Tree'. The fidelity of the recording exposes every detail of this deep jam. 'Willow Tree' spotlights a guitar duel between Bloomfield and Bishop that reveals the unique abilities of each man, and their collaborative strengths. Butterfield sings the shit out of this one with a natural vibrato and deadly serious attitude. Bloomfield answers each verse with his own lyrical melodies increasing the tension. Solo one is Butter, carrying with him a drawn out see-saw harp escapade, seamlessly connected to a dual guitar conversation between  Bloomfield and Bishop that is inspiring. The series containing 'Born In Chicago' and 'Willow Tree' is a definite highlight thus far of this performance. 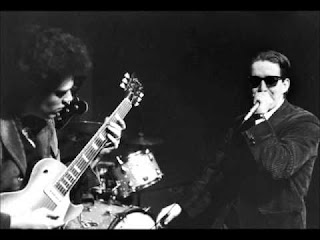 Butterfield hero and idol 'Little Walter' gets a name drop and representation with the cover of 'My Babe' that comes next. Teetering on the snare shuffle of Davenport and Lay, Butter displays his ample ability with a plethora of Little Walter quotes, acting as the primary soloist. At three and a half minutes all the primary soloists stick their thumbs out to hitch a ride, squeezing into the back seat with tasteful additions, carefully leaving room for the other riders. A picture perfect representation of a blues translation, left with the 'BBB's" own distinctive thumbprint on the glass.

A unique surprise comes next with a cover of 'Kansas City' featuring Bloomfield taking over the lead vocal duties. The band rolls like a soft tire on a highway truck, smooth, with some bumps for good measure. Bishop answers Bloomfield's first slippery solo with a careful and measured discussion containing crisp bends and repeated lines that wind up quickly before they fly away like the string on a runaway kite. This one just chugs on down the line, all killer, no filler. Priceless.

The concert recording and I believe the entire performance concludes with an extended reading of Cannonball Adderly's 'Work Song'. Lingering bast 13 minutes, this version of 'Work Song' is a prime example of the exploration into the dark recesses of song expansion that the Butterfield Blues Band were undergoing. Brought into the repertoire because of Bloomfield's investigation into the world of jazz and his interest into extended improvisation used by Coltrane and Miles Davis, this track in addition to 'East/West' were the vehicles the group used to display their musical abilities and induce musical conversations. Using Adderly's recognizable melody as the launching point the band splits the song open and reveals the juicy goodness inside. After stating the theme on harp, Bloomfield lifts off with a echoed and tightly twisted rope of a solo, Lay's bass peaks it head up intermittently after Bloomfield finishes a phrase, and finally Butter too pops in as Bloomfield starts to reveal the core of the track at a bit after three minutes. Taught and sustained notes, worked up to, and away from wrap around the swirling groove. Atonal sideways guitar licks lash across the shifting rhythm with Bloomfield expressing wobbly almost human sounding guitar screams from his amplification. Reaching the first summit, Butterfield steps up for his solo spot and takes an experimental stab at matching Bloomfield. A few well timed squeals punctuate the moaning train whistle blasts initiated by Butter. The song palpably breaths, rising and falling with Butter's blowing. As Butterfield concludes, a brief moment of pulsating rhythm by Lay and Davenport keep the heartbeat active and allow Naftalin to spread some haunted organ flourishes underneath the bubbling tincture. Bell like chimes ring out from Bloomfield's guitar, all rhythmically enticing, pushing and pulling against the beat, creating new variations on the theme. Approaching eight and a half minutes Bishop steps up to make another guitar statement. Whereas Bloomfield's statements bubble and spill like spring water over a smooth stone, Bishop's licks are more angular and aggressive, feeling like walking barefoot over hot rocks. Quick stinging and sliding movements up the neck punctuate Bishop's clinic. Butterfield, Bishop, Bloomfield, and Naftalin leisurely make their way to the middle to throw ideas at one another and see what sticks. Ideas and riffs start to be bantered about as the band his a delicious thumping swing groove. This momentary convergence explodes into a aggressive blast of guitar and harp fireworks that brings the song full circle landing eventually into a final statement of the theme. Screams of delight can be heard emanating from the stage during the building climax. Falling smoothly into the ending, Butterfield signals the end of the performance. Bill Graham is heard after the band finishes introducing the group with the recording cutting off before he can complete the line up.

The September 30, 1966 Butterfield Blues Band concert at Fillmore West is a glimpse into a prime era of their development as a band as well as an expression of their unique mixture of jazz, Chicago blues, Indian, and psychedelic sensibility. Containing some of the most respected musicians in rock and blues history, the Butterfield Blues Band live in concert was an on stage hall of fame. Revolutionary respected, and influential, the original line up was short lived, but did alter the way other groups played and approached the blues and live improvisation. Their debut LP as well as 'East/West' were the records spinning on the turntables of not only fans but of fellow peers and musical artists. Early in their career the group was one of the few 'white' blues groups to gain the respect of the musicians that they were covering, proven by the fact the the original rhythm section hailed for Howlin Wolf's band! The Butterfield Blues Band, one of rocks finest, most professional and talented bands. Search this one out in addition to the groups first two LP's, and prepare for a unique and powerful portrayal of a multitude of musical classifications and all of their beginnings. 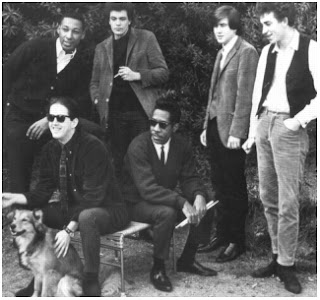 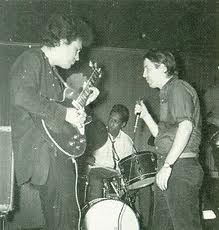 Posted by talkfromtherockroom at 5:16 AM