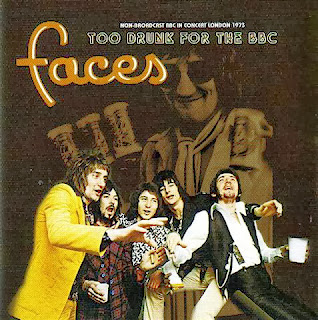 Groovin in the 'rock room' today is a rocking little set by the Faces for the BBC, hailing from February 2, 1973.This original performance had been thought to be lost in the mists of time, submerged in the bottoms of the forgotten dead soldiers of imbibed wine. The band was originally thought to be 'too tipsy' during the concert, therefore the BBC never originally aired the performance as planned. The tapes languished on the dusty shelves of the BBC tape archive to be forever forgotten--- until 2003. The mythical concert was then aired on BBC6 digital for the first time ever, by accident! Another tape had been planned to be aired and instead this show sneaked its way from storage an onto the airwaves. The airing was thankfully captured by an enterprising listener who obviously knew the importance and rarity of the performance! The concert has since been pressed to silver CD under the monicker 'Too Drunk for the BBC', which is the recording I am currently enjoying. This is a mono live recording taken direct from the 2003 accidental broadcast. Whereas the BBC had their opinion of the boys during the concert, a listen forty years later shows the band hot, slightly inebriated, Stewart in a rambling and talkative mood, and a set list played with flush excitement and eager enthusiasm.

The show begins with John Peel's stately introduction, as the band slithers into the opening 'Silicone Grown'. Woody enters with the fuzzy and buzzy opening guitar introduction, that is followed by the rest of the group falling into place like a shuffled deck of cards. The tune swings with a boozy swagger, with McLagan the early star, sliding across the back and whites in a rock and roll fervor. Barley taking a breath, Rod exclaims, 'One, and now we'll do two', as the band grinds into a rough and ready Cindy Incidentally'. McLagan and Lane bounce buoyant counter melodies off of Jones bricklayer rhythms, as Stewart and Woody bump body parts hovering around the stage.

Rod is obviously excitable on this evening and feeling fine, but there is no doubting the power and range of his golden throat. Jimi Hendrix's 'Angel' comes next and is a faithful reading and fitting tribute. Allowing the crowd time for contemplation and a cooling down, the 'sing a long' Angel appears in silver and gold outlined in clouds and is elegant version.

The following two songs find the band hitting their stride and the concert reaching its first boiling point. To my ears the sound quality improves at this point almost sounding as if the recording moves to a slight stereo. 'Memphis, Tennessee' rolls like a flat tire on a Cadillac, with a rotund groove that increases in tempo allowing Woody to disperse a plethora of Chuck Berry riffs, answered in kind by McLagan who replies with well timed rainwater glissando's. Lane's pulsing bass moves enough air to act as another lead instrument, which reaches virtuosic qualities when the band follows 'Memphis' with a florescent version of 'True Blue', a song originally featured on Stewart's Never a Dull Moment LP.

The opening chunk of Wood's introductory guitar riff garners applause from the studio audience, as the band flies a colorful rendition of the Stewart classic. The mid section breakdown of the song accelerates and shifts tempos, featuring the group speeding along asking, 'Don't you think I'd better get myself back home?' The collaborative lyrics are sung over racing and well timed statements by Wood, and McLagan. A welcome and well played version. At this point in the band's career their set included a varied selection of covers, Stewart 'solo' tracks like 'True Blue', and Faces songs. By this point in their career the band assimilates all of these songs into their own, making classification pointless.

An always consistently played version of Sam Cooke's 'I'd Rather Go Blind' follows and its always a difficult task to find a bad performance of this track, which Stewart always invests himself in so fully. Wood answers Stewart's pleading vocals with his own clear tear drop assertions that pirouette under Rod's vocal lines. The Faces inject a dramatic anticipation into the song that never fails to elicit goosebumps. Through Mac's tender organ underpinnings reminiscent of the Band's Garth Hudson, and Wood's own vocal workout through his guitar's strings, 'I'd Rather Go Blind's'
dynamic creep is a keeper, its emotional content becoming even more honest with the urging of flowing booze.

After the compassionate version of 'Blind' the band returns to the vehemence of the earlier tracks with a 'song of much renown', 'You're My Girl' (I Don't Want To Discuss It). This track kicks off a four song run of intensity and rock fervor. 'You're My Girl' is a jumpy multifaceted shred that tells the songs subject exactly like it is. Stewart will except no excuses from his lady friend, and has the Faces there to back him up. Woody ferociously attacks his instrument answering Stewart's pleads by flashing sharp teeth and clenched fists. Jones and Lane are lock and key holding the songs subject in a tight embrace, working together to expose the melodic statements of Stewart, McLagan, and Wood. The song hits a well timed musical orgasm, and concludes as intensely as it started.

An interesting vocal exchange between Stewart and an audience member precedes the raucous and easy 'Twistin the Night Away' that follows. Rod invites the audience member to 'come up here' if the spectator does indeed 'want a job'. 'Twistin' teeters precariously on Woody's edgy slide licks and Jones pots and pans drumming. Characteristic of the Face,s this track feels as if it could fall apart at any moment but retains a kinetic energy that emanates through the magnetic tape.

A husky and chunky 'It's All Over Now' keeps the loose bar band attitude going. At this point in the show is becoming slightly unshackled musically but somehow more intense. The beast has escaped, is looking for the nearest pub, and is stumbling through everything and anything in its path. "All Over Now' bangs recklessly through its changes and segues quickly into a similarly characteristic 'Miss Judy's Farm'. Lane's funky bass is the centerpiece on which the loopy groove balances, as the band plans their attack on the sinister Miss Judy using slicing and distorted riffs. Quintessential Faces.

An always welcome opportunity for Ronnie Lane to take some vocal duties comes next with the Faces cover of Paul McCartney's 'Maybe I'm Amazed'. The introductory vocals are met with various on stage chuckles and snorts for some unseen reason. This is a bombastic version featuring Kenney Jones snare shots, and Lane with an original take on the melody line with his 'lead' bass playing. Wood stretches out his ropy solo over the syncopated lead in to the final round of chorus vocals, eventually falling into the originally unique conclusion the band tacked onto the track.

The dual lead riff between bass and guitar signals the introduction to 'Three Button Hand Me Down' the concluding track on the Faces 1970 debut LP. What begins slightly out of tune and out of sync, becomes a raucous back door slam, hanging from one hinge, chipped paint, rusted hardware and all. Stewart replies at the songs conclusion, "That was really horrible', which is hard to find the truth in, because of the joy felt in listening to the performance!

The recording and concert conclude with a obstreperous reading of 'I'm Losing You' that shakes like with rock and roll desperation. Prior to the song beginning Stewart mentions that this will be the last song of the evening because the 'pubs are closing and we want to get there'. The band then screams through an insistent reading of one of their most well known performances. The few mistakes during the track actually add to its uniqueness and its edgy reading. The 'Ohh, ohh' vocal breakdown is littered with giggles, and emphatic expressions. The tempo pulls, dragging weight, and then suddenly breaks free running with wind blown musical hair. Jones cavernous drum solo precedes the musical detonation that culminates with jangling keys, thumping bass, and ravaged guitar then ends as quickly as it started.

John Peel follows the end of the performance with the statement, 'The Faces, still the best rock and roll band in the world for those of us who really care', a fitting declaration for those who have enjoyed this recording or any of the Faces concerts when they really hit it. It's somewhat strange to listen to this recording and realize that it was left collecting dust for thirty years because the BBC felt the band was not 'sober' enough to warrant its broadcast. Only because of an error are we even able to enjoy it now, or it would still sit unheard. Only those familiar with the history of the BBC's carelessness with tapes and recordings will realize how lucky we are that these tapes didn't end up in the bin!

In less than six months from this concert Ronnie Lane would be gone and the Faces would never be the same. Woody would start his affair with the Stones, Stewart with his ego, and Mac and Jones would be temporary left behind. Throw this recording on in your own 'rock room' and see if you agree with Peel's assertion on who was the best rock and roll band in the world. I know how I feel. 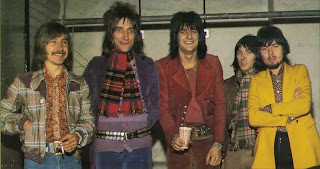 Posted by talkfromtherockroom at 5:47 AM