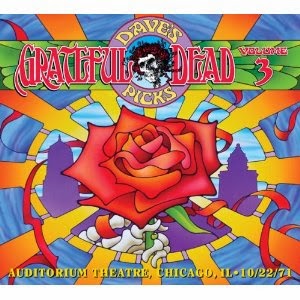 'Now Playing' in the 'rock room' is a musical movement of the highest standard, hailing from an era of reinvention an growth by the Grateful Dead. I am in the heart of the October 21, 1971's second set immortalized on the third CD of Dave's Picks volume three, which also features the October 22nd 1971 show as its centerpiece.  The segment that is 'now playing' in the 'rock room' is the 'Dark Star/Sitting On Top Of The World/Dark Star/Me And Bobby McGee' suite that forms the central axis of this performance. The entire October 21st show, including the first set does circulate in unofficial soundboard capacity. This time period finds the group morphing into the psychedelic beast that would soon materialize in Europe, six months following this particular tour. The group was introducing new songs, assimilating a new pianist, and taking their improvisations to uncharted and exciting levels.
The concert is also notable for being Keith Godchaux's second show with the band since taking over piano duties, in which he asserts himself immediately and assimilates his adventurous playing seamlessly into the group mind. These early concerts are the exploratory templates that would eventually reach cosmic levels when the band reached Europe. Back to the show at hand, the subject of this 'now playing' is the first 'Dark Star' with Keith Godchaux, as well as the first since July 1971. The intimate Auditorium Theatre in Chicago would be witness to numerous peak Grateful Dead performances and this opening night in 1971 is no different. The ornate and opulent theater was the perfect location for the special improvised journeys the Dead were known to embark on.
The 'Dark Star' begins in earnest after a humorous 'Frozen Logger' tuning segment. A graceful examination of the theme occurs with Garcia confidently picking harmonics along with ancient melodic chimes that reverberate through the venue. Billy K scratches on wooden doors with a light percussion that shuffles quickly into the shadows. This is a panoramic and spacious 'Dark Star' drift and at three minutes the band breaks apart into a sickly spider web meltdown. Godchaux asserts himself through scatter shot keystrokes disorienting the direction and encouraging Lesh and Garcia to fall deeper into the musical void. The melt spreads, becoming slightly psychotic in its intent before Garcia aggressively restates the theme and slides into the first verse. 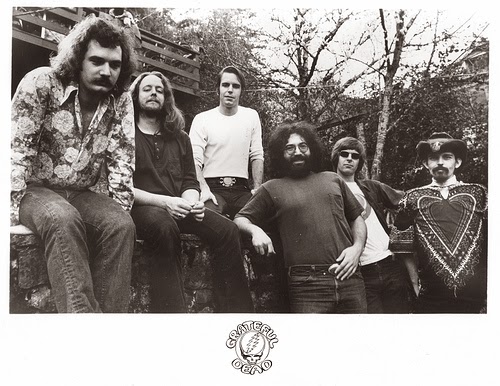 Garcia strongly sings the first verse at half past six minutes, the band then moves briskly from the lyrics before dropping again into a weightless introspective space. Godchaux, Weir, and Garcia roll themselves into a twinkling musical mass at ten minutes. The music becomes a psychedelic music box, Lesh plucks light blue notes, while the music envelops itself, shapeless it bumps into stars, dissipating before moving on. Garcia begins to dig away at layers of the jam, hitting on ideas, discarding ideas, before brushing away the dirt and revealing the central theme he so wanted to discover. The jam ignites like flash paper, gaining momentum through a series of heavenly melodic statements by Garcia and Godchaux. Kreutzman becomes the multi-limbed master and the unsung hero throughout this multifaceted excursion. He plays a plethora of poly-rhythmic grooves that branch off from the central trunk of swing beats. Garcia's Stratocaster has the classic shimmering and ethereal 'Europe' tone that drives the band into an excitable 'Feeling Groovy' jam that careens around corners at dangerous rates threatening to lift off at any moment. The post verse jam is an example of peak and prime Grateful Dead, birthed during this very era and riding an awesome wave straight on through the Winterland 1974 performances. The jam rises, the suddenly, the band becomes molecules dissolving like sugar in water and returning to a sparkling drift. 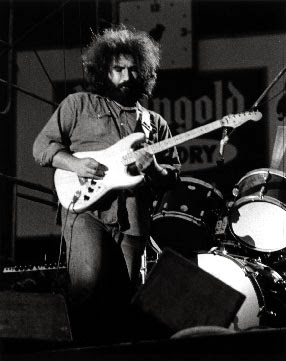 At this point the jam disappears as quickly as it appeared, reaching its outstretched hand over the jagged edge of the sonic precipice to gain purchase, pulling itself skyward, quickly becoming a lightning struck version of 'Sitting On Top Of he World'. The band boogies their way through the song at high velocity. The band sounds positively joyous as they romp through a prime rendition. Garcia plays two pliable honky tonk solos and then Bam! We are back in the midst of 'Dark Star'. The second verse is sung quickly and before we realize its not 'St Stephen',Weir strums the opening strains to 'Me and Bobby McGee'. Similarly to the music that preceded it, this 'Bobby McGee' is concentrated joy. The band's attention to detail is marvelous, and the 'Bobby' becomes a fitting landing to the previous 25 minutes of musical flight.
The second set then concludes with the 'St Stephen' that was missing from the previously played 'Dark Star.' Segueing into a streaming 'Johnny B Goode' and closing the performance on a high and rocking note. This 'Dark Star' suite from early in the Grateful Dead's 'golden era', is a fine example of the grey area lying between the bands early 1971 'bar room' jam sessions, and their gradual development into a nimble, swinging psychedelic jazz band. The Fall of 1971 is full of these amazing performances, sometimes falling flat in spots, but always full of the possibility of magic and the drive for exploration. Dick's Picks Volume 2 features a concert from this era, hailing from October 31, 1971 which also contains an extended 'Dark Star' excursion worth checking out. Road Trips 3.2 showcases a mid tour meltdown with the November 15 concert in Texas. The short lived 'Download Series' offered up the October 26 Rochester, NY show for a short time, giving us another well played and extended performance.  Well, that's it from here, check it out, thanks for reading!