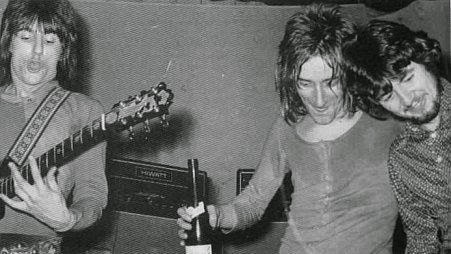 Playing in the 'rock room' today is a rough and ready soundboard recording of 'Faces', hailing from their first US tour in 1970. The band's debut LP First Step had just been released on March 21, 1970, read about that record here and to support the album the band undertook a 28 date tour still sometimes billed as the 'Small Faces'. This master soundboard recording circulated in 2005 and finds the band in early form playing with fire and attitude. There are a few tunes that quickly disappeared from the repertoire that are featured on this recording that add to the performances relevance. The soundboard has an acceptable balance of instruments, but does suffer from some level fluctuations, hiss and distortion at times. These minor anomalies are minor when compared to the rarity and demonstrated power of the concert capture. With the exception of 'Looking Out the Window' and 'Three Button Hand Me Down' the band plays the entirety of the first album in addition to a down right ornery version of Willie Dixon's 'Evil'.

The band played three nights at the famed 'Boston Tea Party' over March 26, 27, 28, the recording spotlighted here purportedly hails from the 27th, but has circulated under other dates. The enthusiasm demonstrated by the band on this recording is admirable. They play with dynamics, attitude and bank vault tight collaborations. The band would be playing stadiums before they would realize and the popularity of the band (especially their singer) would rocket through the roof within the following 4 years. This capture finds the band young, hungry and with an intimate group of admirers standing witness to their growth. The band was actually second billing to the Lee Michaels Group for these performances, but due to the aptitude and explosiveness of concerts like this one they would soon be filling their pockets with the headlining slots. The band is feeling good and playing well with the slight scent of alcohol permeating the recording.

After a vibe setting ambient view from the stage and introduction by Boston Tea Party MC Charlie Daniels the group detonates Bob Dylan's 'Wicked Messenger'. The opening track of their debut LP, this threatening version holds a knife to the listeners throat with slicing slide guitar by Ronnie Wood and string rattling Ronnie Lane bass runs. The song cascades over its descending riff, thumping over a rocky road to a clandestine hell of its own design. McLagan's organ lends a secular fog over the proceedings, contrasting the fist through the wall percussion and stone sharpened guitars. 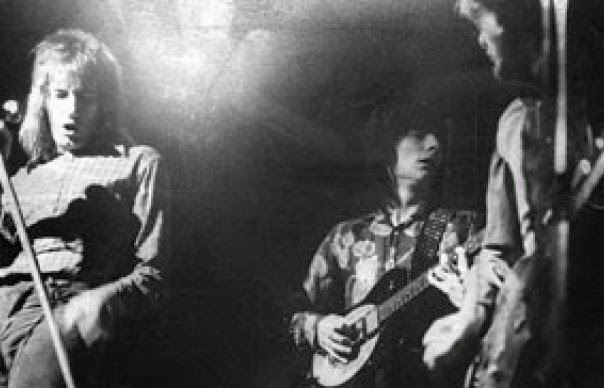 With barley a pause except for an off mic 'Yeah' by Stewart, Woody plays the opening riff to 'Shake, Shutter and Shiver' a Lane/Wood composition that would have limited on stage exposure. Similarly to the opening track, Woody's guitar is exemplary driving the band into a steel toed stomp. Lane and Stewart share vocal duties and Kenny Jones deserves mention for his heavy handed firecracker percussion.

Bringing the vibe down to delicate and beautiful the band begins the 'Mayfield' influenced 'Devotion'. Lots of off mic asides and interjections increase the soulfulness of this rendition which culminates in a screeching and stretching Ronnie Wood guitar solo. Bonus point to the always poignant middle section spotlighting Lane and Stewart swapping gentle vocal lines.

My personal favorite highlight of the recording and performance follows with a menacing reading of Willie Dixon's 'Evil'. The song was one of the first tracks ever played by the band as illustrated by the rehearsal take from Summer 1969 included on the band's box set, Five Guys Walk Into A Bar. This version tears through the band's start/stop arrangement, by using dramatic and scratching guitar mutes that interchange with washes of cymbal swells and McLagan's R and B rips. At 3:25 all band members disappear as the entire group melds into one player, a rolling musical maelstrom that deftly drops into a bedtime recitation of the verses. Stewart spits the vocals in inspiring fashion, syncopated and abrasive, so rock and roll. The second instrumental excursion follows and fires the song arrow straight through to its conclusion, but with some unfortunate mix issues appearing on the recording. Regardless, another imposing climax is reached with Lane's bass providing the darkened bedrock before the band ends perfectly united. 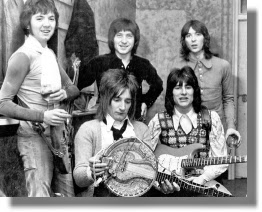 Following some on stage diddling Stewart announces the the band is going to play 'Flying'. One of the greatest songs in the 'Faces' catalog, this reading is studio perfect, while still containing some raw Stewart vocal approaches. The concluding jam is triad of musical intercourse, with Lane, McLagan and Wood intertwining their respective melody lines into a tangible object of soaring musical joy.

Mellowing the mood, the rarely played 'Nobody Knows' begins with electric piano, tasteful slide and stirring Lane and Stewart collaborative vocals. The Lane/Wood penned song drifts on an unmistakeable Lane melody line, blissfully ending before it even feels like it begins. The song is representative of the brotherhood of the band during these early concerts and is one of the most underrated of Faces songs.

The Ronnie Wood instrumental 'Pineapple and Monkey' follows after some on stage discussion of how long left the group has to play. A slightly smart ass introduction by Stewart precedes the multifaceted and funky instrumental. Wood takes a couple of crispy solos in addition to his statements of the songs thematic basis, beautifully echoed by McLagan. It amazes me how many solid and virtuous solos Wood takes, knowing that he would not be allowed the same freedoms after joining the Stones in a few years.

Often the groups' basis for improvisation, 'Around the Plynth' follows next, a slippery and undulating slide guitar groove the extends past six minutes and is a Ronnie Wood as well as a Kenney Jones showcase. Jones thumps out a kick drum clinic in which Wood and McLagan drape their sweeping statements. This version is still in its formative stages but spotlights some steely sleek playing by Wood. As has been the trend for the entire show Stewart is posing as rocks greatest vocalist, disseminating a flurry of melodic and edgy vocal lines with glamorous attitude and with no worry for slight pitch variations. The mid point jam of the number peculates with frothing energy, encouraged by Lane and Jones. 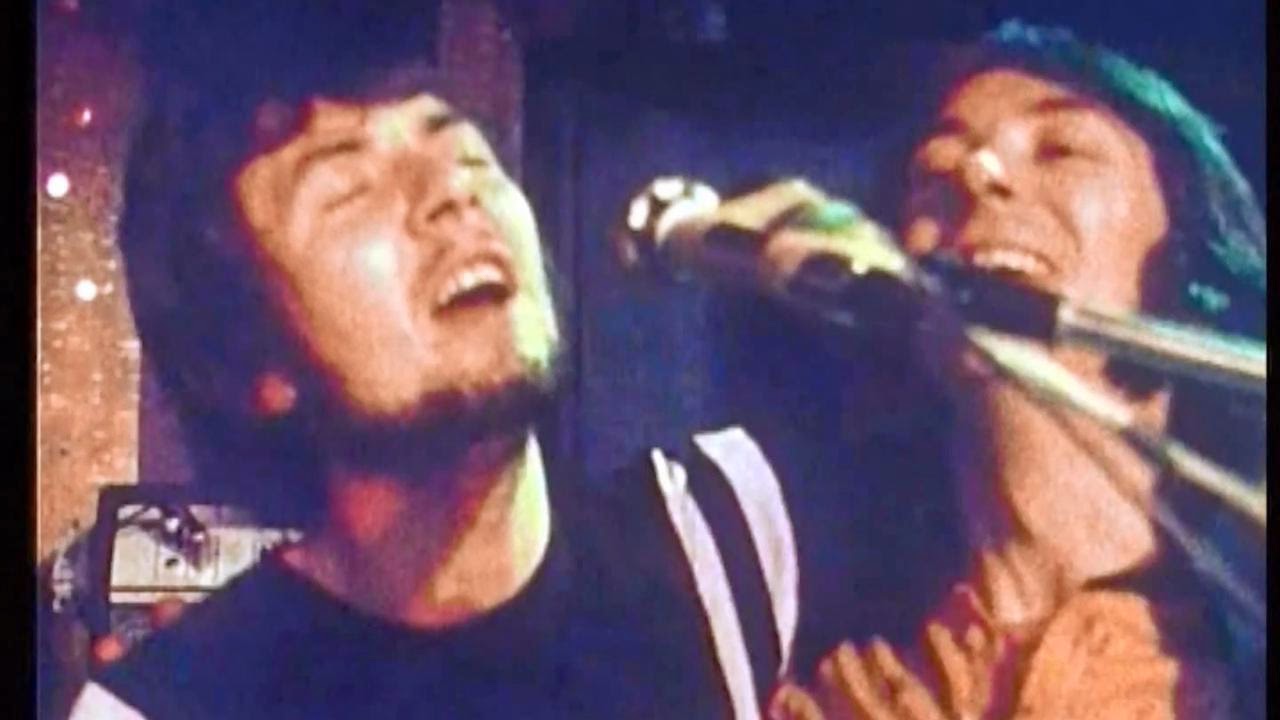 Stewart announces the closing track, 'It's All Over Now' as a song from his new solo record, a small sign of divisions to come in the future. The band hits this one over the green wall at Fenway, although the recording cuts off before its conclusion, most of the jam is captured. A fitting and crashing rock and roll conclusion and a swaggering introduction of the Faces to a US audience. Rod sounds slightly fuzzy at this point, but I'm sure the communal bottle was close by. A number of groups such as the Grateful Dead, Allman Brothers and Neil Young and Crazy Horse earned their keep in front of the tough Boston crowds, only to emerge better bands. This particular soundboard recording captures the Faces doing the same thing, only coming in as outsiders and foreigners and proving their musical worth to skeptical strangers.

Fans of the Faces owe it to themselves to seek out this soundboard recording and compare it to the other circulating recordings from the bands heyday. In the 'rock room's' opinion this concert compares favorably and only enhances the bands mythology and influence. Take a trip, join the crowd and witness unadulterated rock and roll hailing from a legendary venue in rocks greatest era.