Rolling Stones:'Wherever I Go They Treat Me the Same'-From the Vault Hampton Coliseum 1981 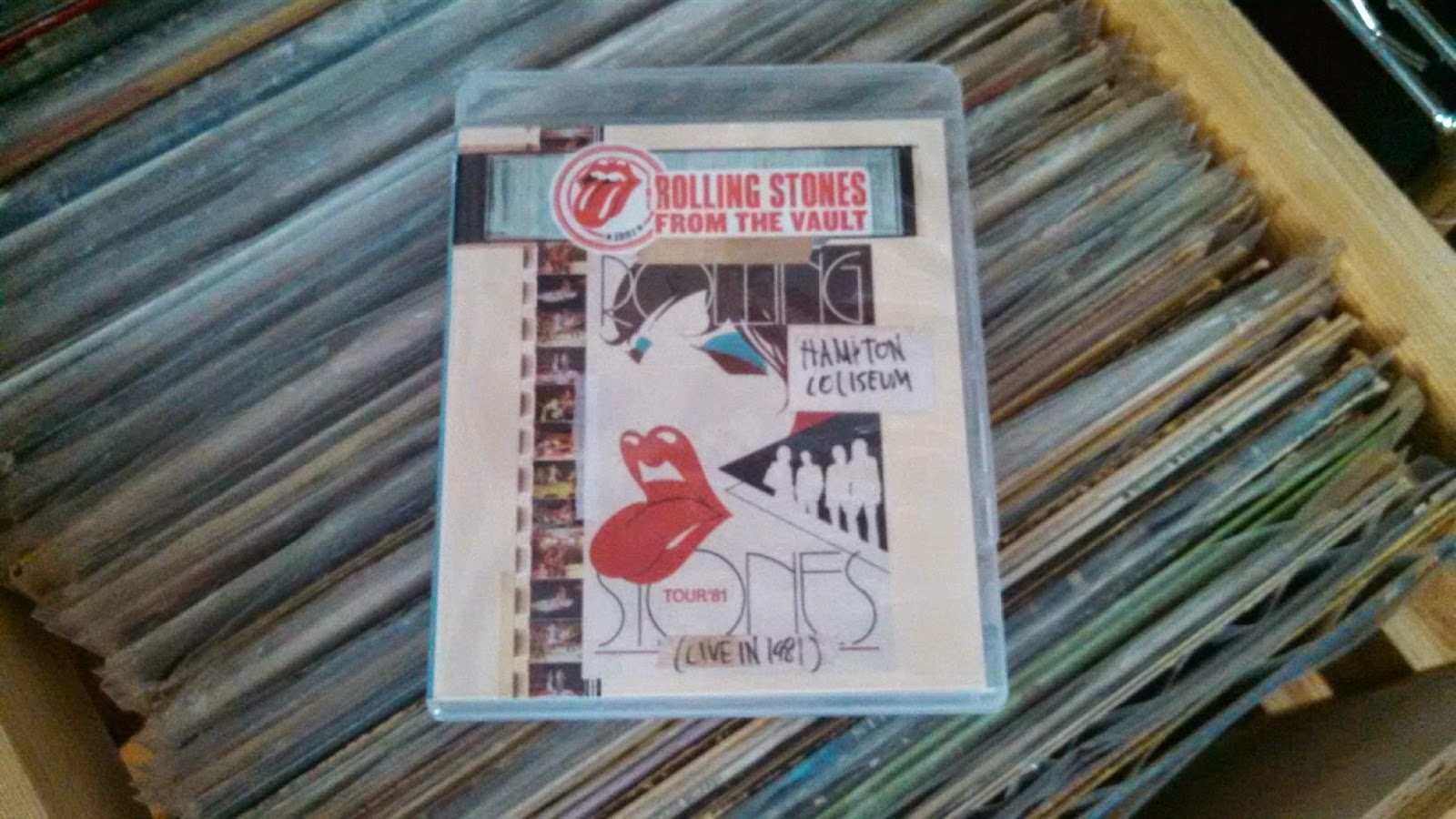 The debut release from the Rolling Stones new From the Vaults series has finally been given to their hungry and eager fans. From the Vaults: Hampton Coliseum 1981 captures the Stones at the conclusion of their massive 1981 tour in support of Tattoo You. This featured official release hails from the first evening (December 18) of a two night run to close the tour which also happens to be Keith Richards birthday! The Stones proceed to play one of the finest concerts of their illustrious career, playing an expansive set that surpasses two and a half hours and spotlights multiple eras.

The audio and video of the performance has been lovingly re-mastered by Bob Clearmountain resulting in a definitive and awe inspiring document of the ‘greatest rock and roll band in the world’. Besides one barely noticeable edit taking place (see if you know where), the focus is on clarity and detail. Every nuance of Bill Wyman’s nimble bass playing, the string resonance of ‘Keef’s’ ringing Telecaster’s and the thump of Watt’s woody kick drum are all displayed in crystalline quality. This was a nationwide ‘Pay per View’ broadcast so the pro shot video contains every nuance available, while the re-mastered sound is multifaceted in its sonic spread. The instruments speak with sparkling tone and confidence, while Jagger sings well and does so while leaving behind his 1970's practice of shouting for the majority of the concert.

At the time, the 1981 tour was the most successful North America tour the band had ever undertaken. The coliseum sized stage set up, a standard of all Stones tours was minimized for the ‘intimate’ confines of the Hampton Coliseum.  As evidenced by the existing video, the Stones were fashionable and influential creating their own undeniable style and approach.. The vibrant color pallet and ragged chic of the era is in no way representative of the dark unbreakable rock solid grooves and bluesy guitar weaving mechanization's that take place on this evening.

Almost every song is extended beyond its normal boundaries and every reading is energized and fire breathing. The greatest aspect of this concert is that each and every song is carefully crafted and expanded with no clock watching by the group. The concert begins and slithers in on the groovy strains of a loose ‘Under My Thumb’ that culminates in an edgy crocheting of guitars. The feeling that it’s going to be a great concert is evident as the band is revealed from the loudly bedazzled rotating stage. ‘When the Whip Comes Down’, strikes without repent followed by a thick and guitar heavy ‘Let’s Spend the Night Together’. The band is hot to the touch and do not let up through the first half of the performance at all! A dangerous ‘Shattered’ and aggressive reading of ‘Neighbors’ follow in breathless fashion keeping with the evenings theme of all out hoodlum rock and blues. Woody and ‘Keef’s’ guitars nip at each other and the dual piano attack of Ian McLagan  and Ian Steward keeps the rock rolling with no chance of slowing it down 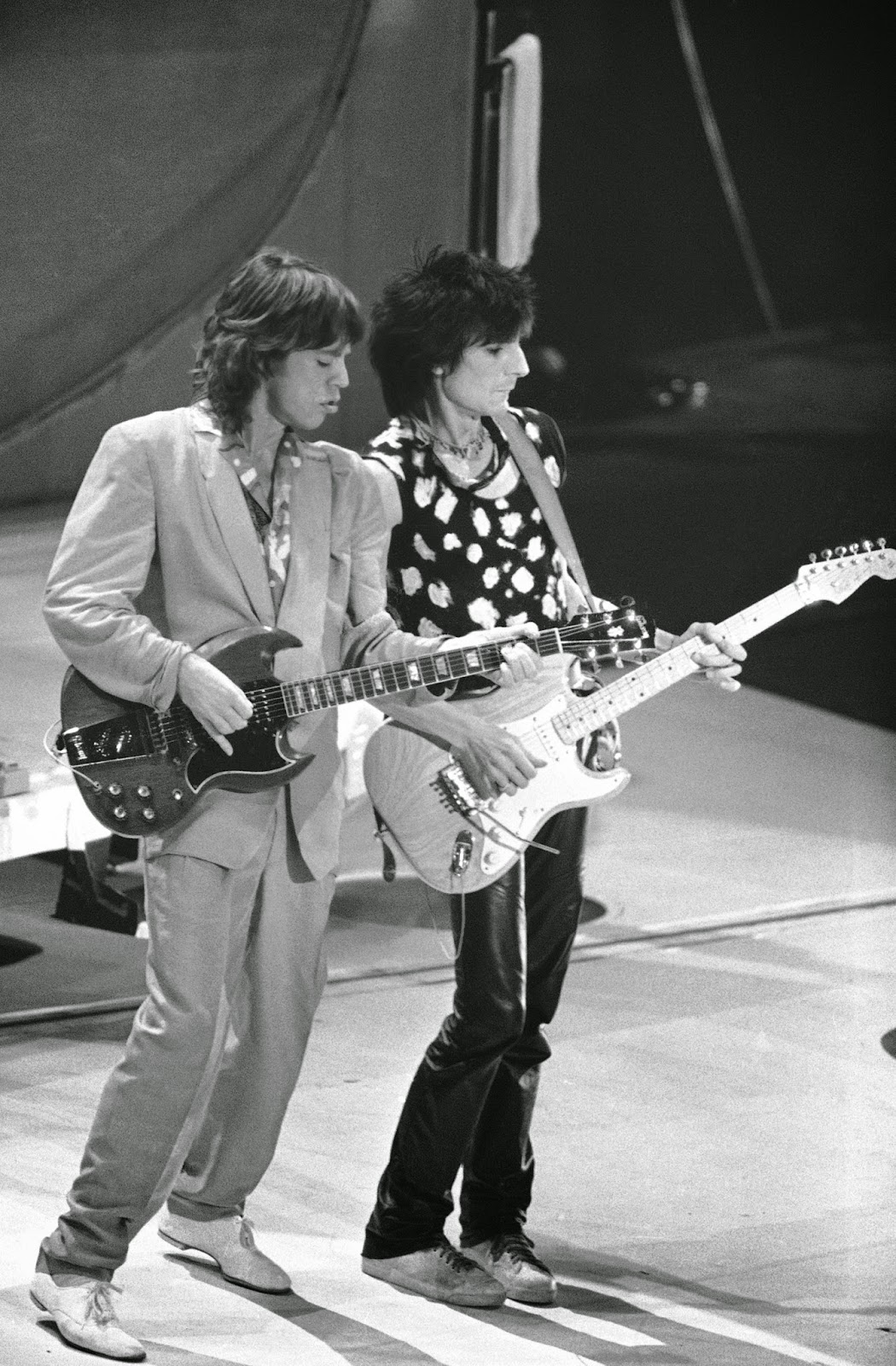 Boot to the throat, the only respite comes in the form of ‘Just My Imagination’ which ends up turning into a jam with Saxophone player Ernie Watts blowing the blues away from the dampened outside evening streets. One of my personal favorite segments of the concert occurs next with the bang banging of Eddie Cochrane’s ‘Twenty Flight Rock’ and a tribal nightclub reading of the Miracle’s ‘Going to a Go-Go’. The boys really hit it here, street corner tugging on a smoke after a hot night in the bar; Watts and Wyman lock it up. Quintessential Stones. A major highlight of the collection.

A rare reading of Emotional Rescue’s ‘Let Me Go’ follows and finds Jagger making his way along ramps and catwalks to frolic amongst the crowd. The Stones tear away from their pursuant and adoring followers as they disseminate another definitive version of a jagged and rarely performed classic.

A true cool down period follows with the triad of ‘Time Is On My Side’, ‘Beast of Burden’, and ‘Waiting On A Friend’.  Keith Richard's pours on whiskey soaked backing vocals and strangles out an inspired solo on an ace version of ‘Time Is On My Side’.  Mick dons his beach hat and acoustic for a sunset version of ‘Waiting On A Friend’ that is reason enough for this release. The guitars shimmer in the narrator’s hopeful anticipation, the saxophone elicits knots in the listener’s stomach from its blinding beauty. This may be me waxing poetic, but every damn time I play this track it elicits the same emotions from me.  Richards stands stout, cigarette hanging from his lips, every lick a stitch into the blending instrumental tapestry. 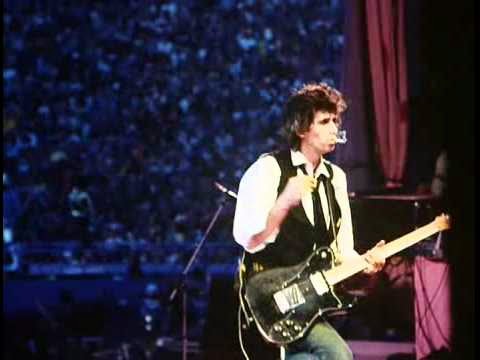 “Let It Bleed’ and “You Can’t Always Get What You Want’ follow and lend the crowd two of the bands beloved classic tracks, with Jagger staying on acoustic for the former. ‘Let It Bleed’ is played by the ‘Country Honks’ with shit kicking boots, spotlighting Woody on his  blue slippery slide and culminating in a fantastic conclusion.  ‘You Can’t Always Get What You Want’ gets an extended performance and a new funky life is injected into this Stones standard.

Richards’ birthday is given its due notice as Jagger introduces the band and drinks are brought out in celebration. A welcome performance of Richards, ‘Little T and A’ is another concert highlight with Woody and Richards going Barbarian and grabbing both cheeks authoritatively on this fiery rendition.

A celebratory ‘Tumblin Dice’ follows with Jagger returning dressed in an American football Eagles jersey inexplicably adorned with tassels. The band knows they got us now and proceed to prove their proclamation of being the world’s greatest rock and roll band. Stratocaster and Telecaster chime in a sexy coalition, leaving the card table behind and leaving with the clandestine lady by the door.

In a performance full of strikes and counter strikes, ‘She’s So Cold’ and ‘Hang Fire’ add an additional 1-2 punky punch before the concluding ‘hits’ run. Both songs run with the RPM’s jacked, Woody swings around the stage euphorically unable to contain himself as Richards’ is down to a shredded T-shirt, eyes closed, metallic riffs sparking from his hands. This segment is also ‘must see’ Stones and lends a great anticipation to what lies in the recesses of the Rolling Stones vault. 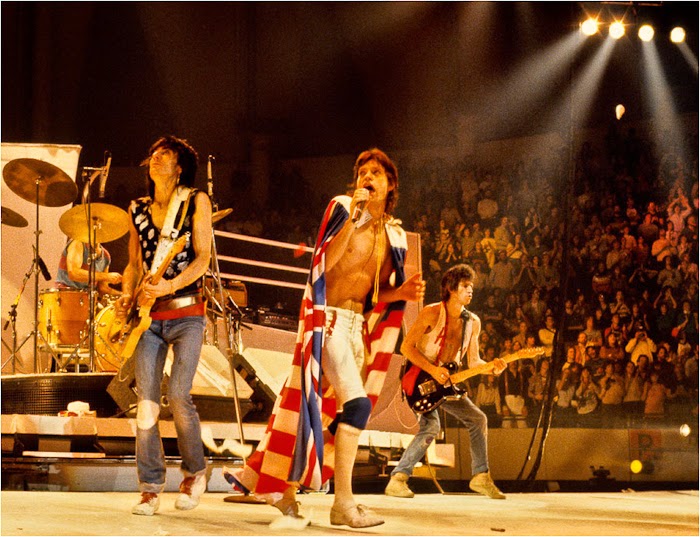 
The following red light ‘Miss You’ signals the approaching  musical pillars visible on the horizon that comprise the supports of the substantial catalog of the Rolling Stones. The band tslams through ‘Honky Tonk Women’, ‘Brown Sugar’, ‘Start Me Up’, ‘Jumpin Jack Flash’ and ‘Satisfaction’ with authority, determination and attitude. Textbook live versions of recognizable standards of rock played with investment and verve. The crowd is ignited; the band sets it in cruise control and release the rocks down the hill. ‘Brown Sugar’ and ‘Honky Tonk’ see the addition of Stones veteran Bobby Keys’ to the stage and his simpatico with Richards is obvious as the jams lift off of the earth. Mick threatens to get naked through his dress and sprints around the arena in jaw dropping endurance. The concert threatens to tear the venue from its mounts and to rip apart at the seams. 'Jumpin Jack Flash' sounds like the turntable may need a belt adjustment it is so kinetic, finally stretching out to allow for Jagger to play around on a skyline cherry picker.

The following ‘Satisfaction’ features a moment of note and rock myth when midway through the song a fan who can no longer contain their brewing excitement runs on the stage toward Jagger. What follows the epitome of rock and roll cool as Richards’ removes his black Telecaster and takes a home run swing connecting with the crazed fan and allowing security to escort him from the stage. ‘Keef’ places the strap back on his shoulder and keeps playing, in tune and in time.  Richards was later quoted as saying that this was a great advertisement for Fender as the guitar stayed perfectly in tune after striking the rogue fan. This moment is a fitting conclusion to a concert brimming with ‘cool’. Whatever your definition, in the world of rock it does not get any better than this. Description is pointless, go get this video and enjoy it in your own rock room!

Look soon for a review of the second installment of the Rolling Stones From the Vault series containing audio and video from the Stones 1975 L.A. Forum run. This first edition has set the standard high with one of the finest examples of the Rolling Stones live on stage a fan can find. No matter the environment or the era what can be guaranteed is that the Stones will play rock at 100 miles an hour. In an era of slick production and sometimes questionable values the Stones remained relevant by creating their own style and always staying true to their roots. The Hampton 1981 release finds the band at the peak of their second era of popularity, features a diverse set formed from all walks of their early career and performed with a vehemence and attitude. Start here if you are probing the live catalog of the Stones and start here if you’ve been with them all along, because this is one of the best nights with the Stones that you can find.

Posted by talkfromtherockroom at 10:37 AM