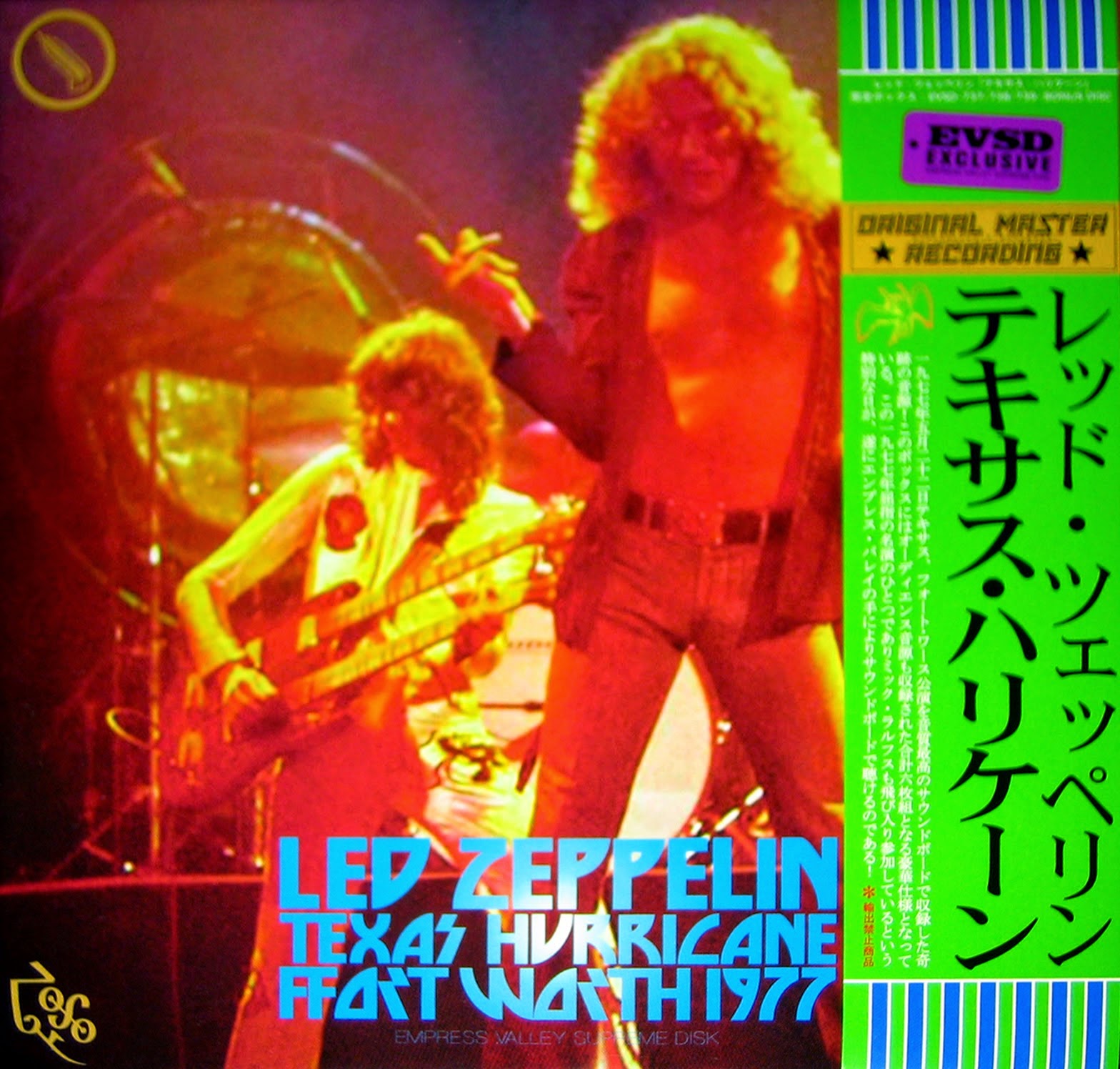 Jamming in the ‘rock room’ today is a recently (2014) circulating soundboard recording hailing from Led Zeppelin’s 1977 US tour and featuring the ‘tight but loose’ attitude that the tour is famous for. The soundboard is a thick sonic slab of prime Zeppelin, slightly flat, but well balanced and conveying an enjoyable clarity. While perhaps not as consistent as previous tours, the 1977 road trip finds the band toying with the set list, while playing the recent songs from Presence with fire and attitude. The featured recording comes from May 22, 1977 Fort Worth, Texas titled, Texas Hurricane.

Robert Plant’s voice is in decent shape and as Zep fans know his vocal screeches and reaches throughout a tour often left his vocal chords battered and bruised. Here the soundboard recording allows a glimpse into Plant’s vocal control and finds him in solid form. John Paul Jones is especially audible and having a particularly fine evening playing multiple instruments. His Alembic bass guitar is elastic thunder, aggressive,  driving and a pleasure to focus in on. Bonham acts as the steel metronome and per usual leads the band; his drums are well mixed and up front. Page is also having an alchemical evening, sometimes conveying insanity through his mad soling that threatens to leave the earthly realms at any moment.

The concert begins with ‘The Song Remains the Same’ the usual opener for the tour. While not quite the kinetic level of the famed version from June 21, 1977 this is a substantial rendition lead by John Paul Jones. Without missing a beat the band leaks into a sludgy version of ‘The Rover/Sick Again’. Plant gets it going with mountain top vocals, pushing right to the very precipice of his range. Page greases the wheels for the evening with streamlined and chorused soling. The mix of the recording has settled in and Plant now acknowledges the crowd with a ‘Good Evening Fort Worth’. A humorous exchange occurs when Plant apologizes for a delay and states that there were ‘a few clouds in the sky between here and New Orleans’.

The band plays a standard for the tour reading of ‘Nobody’s Fault but Mine’ that features a well blown Plant harp solo before the first heavy highlight of the show occurs.  Plant tells the crowd to ‘Dig It’ before a false start derails their first attempt at ‘In My Time of Dying’. Plant makes another comment about ‘clouds on the stage’ before beginning anew. The second attempt springs from the grave with demented metallic slide guitar from Page on point vocals from Plant. This reading is a top version from the tour and a cohesive performance from the group in spite of Page losing himself toward the conclusion of the song. The ending even features a quote of ‘You Shook Me’ for good measure, a nod to the bluesy attitude of the set. 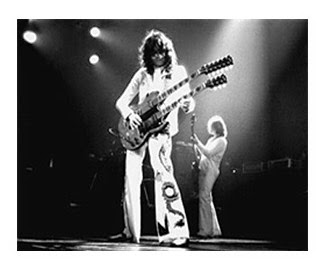 The highlights continue with an all time and version of ‘Since I’ve Been Loving You’ introduced by Plant as, ‘another blues based, put together by ourselves’.  'Since I’ve Been Loving You’ creeps like low lying smoke in a atmospheric version that features dripping keyboards by JPJ and aggressive clean soling by Page who conjures relentless dynamic twists on the blues theme. His first solo glows with stinging heated embers before submerging itself and cooling in dark pools of reflection. One of the finest live versions available in the rock rooms humble opinion and worth seeking out.

The centerpiece of the concert now follows in perfect time as the band is peaking and locked in tight. ‘No Quarter’ extends past twenty minutes navigating shadowy and jagged terrain, spotlighting the ample piano abilities of John Paul Jones and allowing for the band to improvise their journey. Following the introduction, Plant doesn’t even sing the verse before Page’s sonic ‘dogs of doom’ break down an ancient door revealing the mid song wilderness path. Jones performs a solo recital of haunted hanging piano melodies before he is joined by Bonham and a ragged and a enthusiastic rock and roll jam develops. This sturdy jam appears, but only momentarily before crashing back into JPJ’s moody soling. This excursion coalesces into the usual (awesome) ‘No Quarter’ jam, which materializes and finds Page burrowing below the earth, his soloing revealing magical strata to which Bonham lends a thunderous funkiness to each discovery.

Page now crouches low circumnavigating the netherworld revealed by his sonic searching. Bonham lights a fuse initiating numerous and small detonations. Page communicates through an unknown dictation; a small woodland creature answers his call and then disappears into an overlapping field of precariously stacked boulders. The jam explodes into a climax, leaving smoky remnants of Bonham’s deafening rolls behind before it continues over a series of steep climbs and descents. Page increases the tension, pokes Bonham and teases Jones into a series of call and response discussions. A syncopated and accented jam takes place between the trio before a swinging groove develops, leading into a return to the song proper. Page initiates the return back to the framework with a maleficent chord change that induces uneasiness and excitement. Plant sings the second and only verse before Page takes a magnificent solo to conclude another all time version of ‘No Quarter.

The introspective and stunning ‘Ten Years Gone’ follows featuring John Paul Jones on his famous three necked guitar presenting  a 12 string, 6 string and mandolin.  A highlight of all of the 1977 concerts Jones and Page blend their respective instruments into an extended representation of lost love and regret. This amazing version sets the stage for the ‘sit down’ portion of the show, the upcoming acoustic set. 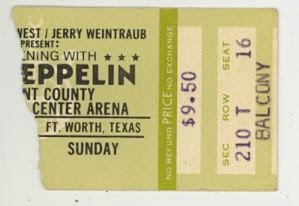 Bonham moves to the front of the stage amidst smart ass comments by Percy. The acoustic set is a career retrospective beginning with a dramatic ‘Battle of Evermore’ containing JPJ on backing vocals. The entwined filigree’s of ‘Going to California’ offer diffused pinpricks of sunshine illustrated through Page and Jones delicate riffing. Plant offers a ‘Hot Diggity, its hard’ at the tunes beautiful conclusion.

A stomping ‘Back Country Woman’ prelude rides on donkey kick drum from Bonham before segueing into a high octane back porch ‘Bron Aur Stomp’. The stellar acoustic set allowed for a brief respite before the upcoming climatic apex of the concert.

Page appears with his trusty Danelectro guitar for a solo segment of ‘White Summer/Black Mountain Side’ that tribally bounds on Bonham’s tom toms. Page uses his segment to segue into the 1977 tour highlight of ‘Kashmir’. ‘Kashmir’ is a typically extravagant 1977 version with JPJ’s orchestrated warm breeze Mellotron quotes and Pages phased riffing bringing the crowd to a rolling boil, concluding with a colossal Bonham led climax.

Bonham then gets his opportunity to amaze with a hyper extended half hour ‘Over the Top/Moby Dick’. Pharmaceutically charged and holy rolling Bonham is the schizophrenic drum corp. leader with awe inspiring triplets in triplicate. Bonham plays through rumbling Tympani and echoed and disorient jet liner effected drum rolls to the point of exhaustion, finally returning to the recognizable ‘Moby Dick’ theme. 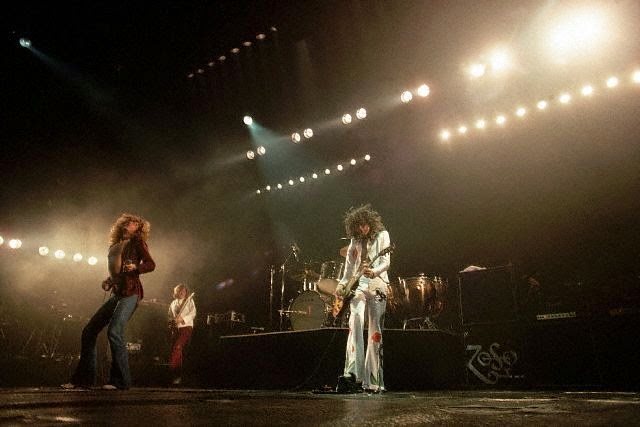 Following the Bonham showcase, Page takes the stage alone for a diabolic and crazed array of soling first with plectrum then with bow. Pitch manipulated screams and streaks of found sound created by Page’s sonic creations abound during this segment. Listen for the quote of the ‘Star Spangled Banner’. Page’s Echoplex and bow also add to the madness through deft uses of feedback and eye watering demonic conjuring. Page’s ‘Dazed and Confused’ bow theme appears, including a quote of ‘Beck’s Bolero’ and acts as a prelude to the full arsenal ‘tour de force’ of ‘Achilles Last Stand’. The bow solo slams your privates in a wooden drawer and then listens for the devil wind emanating from Page’s distorted guitar signaling the arrival of ‘Achillies’.

The band rises to the high standard of the previous songs and delivers a stellar version of ‘Achilles’. The diverse and multiple changes and studio guitars are no match for the bands enthusiasm and solid playing. Jones rattles the frets out of his bass neck too keep up with Bonham and Page plays the multiple guitar parts with flash and flair.  The concert could very well have ended here, but the band still has a bit more to give.

The expected but no less effective ‘Stairway to Heaven’ comes next with the band taking the song past twelve minutes and moving through the changes with grace. Page’s soling on the double neck is unique and well played. There is no other way that the main set of this concert could have been more properly concluded.

The band returns for the tour debut of ‘Whole Lotta Love’ which acts only as a short introduction to ‘Rock and Roll’ for the first encore, initiated by Bonham who will not take no for an answer. This song combo illustrates proof of the excitement the band felt during this inspired performance. They absolutely slam through this version of the oft-played classic. If that was not enough for the soaked up and rung out crowd the band returns for a second encore with label mate Mick Ralphs of Bad Company to join in on guitar. Plant again makes a humorous comment I will leave for the listener’s discovery. What the band does close the show with is an ultra rare rendition of Jerry Lee Lewis’s ‘It’ll Be Me’. The band jams the tune like its an every night occurrence and Percy swaggers and sings with an early rock and roll attitude. A special conclusion with a special song for a unique concert filled with moments of note.

For fans of Led Zeppelin’s live excursions the soundboard recording ‘Texas Hurricane’ is an exciting representation of Zep’s 1977 tour. A nice companion to the famed ‘Destroyer’ boots, in many ways this concert equals and/or surpasses the performances in April.  The soundboard quality is just what every Zeppelin fan could ever want and the performance offers a few rare moments in addition to moments of pure musical genius.