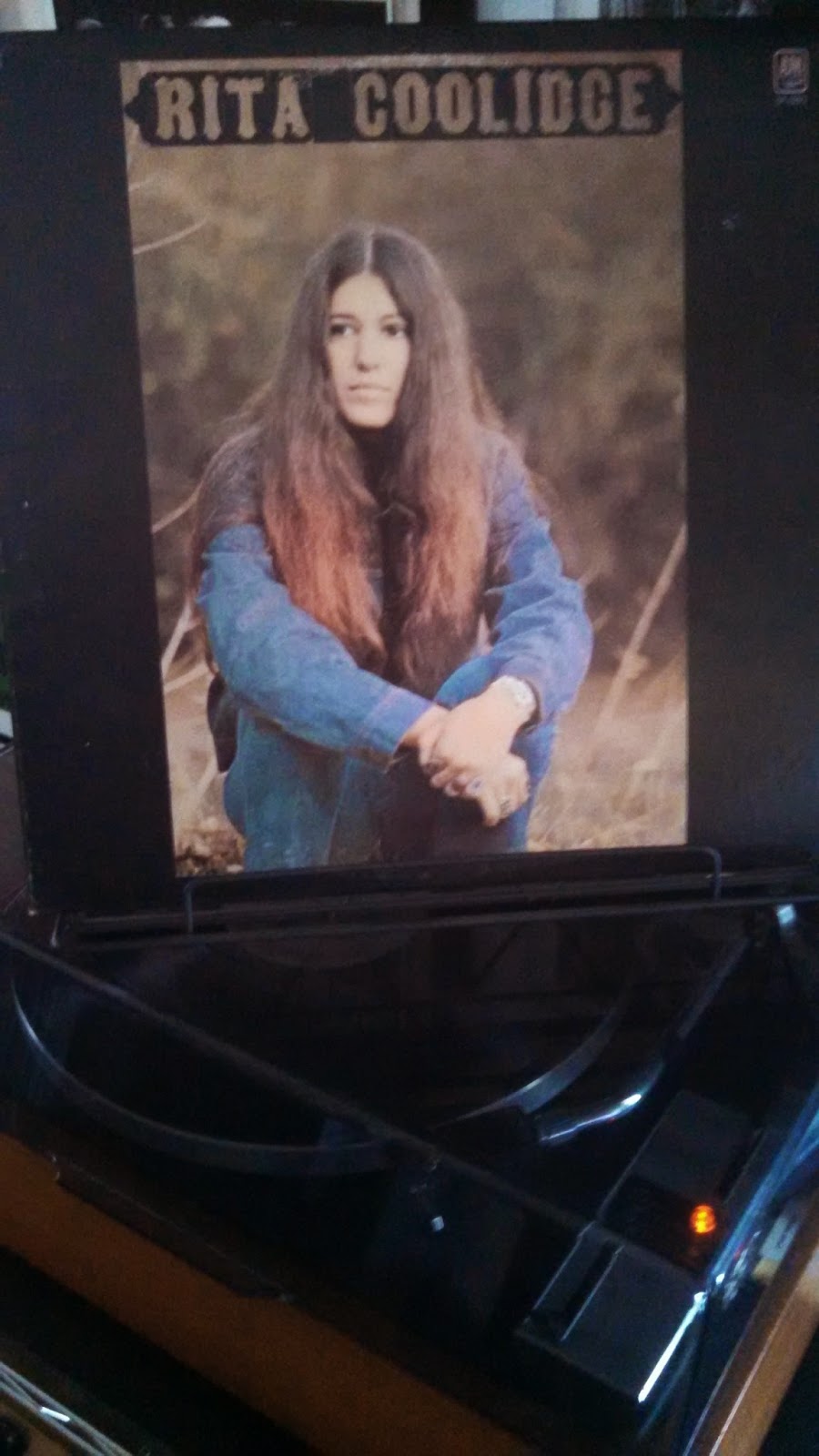 Today in the ‘rock room’ the sweet and soulful sounds of Rita Coolidge’s 1971 debut LP are emanating from the turntable and mingling with the scent of burning sage. This stunning self titled debut not only contains the smoky smooth vocal styling’s of Rita Coolidge, but the string and horn arrangements of Booker T. Jones and Jim Horn as well as being an absolute who’s-who of  rock royalty in making up Coolidge’s studio band.  Rita Coolidge’s voice came to prominence due to musical stints in Memphis and then with Joe Cocker’s band as well as with Delaney and Bonnie in the late 1960’s. By 1971 she was ready to release her own brand of music when signed by A and M, the rest being history.

The solid core of Coolidge’s backing group was comprised of Jim Keltner (Drums), the aforementioned Booker T. Jones (bass, organ), Spooner Oldham (piano, keys), Clarence White (Guitar) and Jerry McGee (Guitar). In addition to these core contributors the album also contains cameos by Stephen Stills, Ry Cooder, Chris Ethridge, Donald ‘Duck’ Dunn, Bobby Womack and Fuzzy Samuels. Over all of these amazing developed musical arrangements Coolidge spills out her gospel upbringing and hefty wail while developing one of the most amazing and disparate albums of the early 1970’s. Quality songwriting, the best players and soulful singing… what else could you want out of an album? While the LP received regards critically it did not do well in the marketplace, which is often the case with great records. Regardless, its gifts still exist in the grooves and probably still in the $3.00 record bin at your local record shop.

The album begins with the long distance gaze of ‘That Man is My Weakness’. A bluesy regret built around big backing vocals by the ‘Blackberries’ made up of Clydie King, Venetta Fields and Shirley Matthews. Coolidge enters the tune with a pronounced gospel lean, joining Leon Russell’s secular organ proliferation's. Clarence White masquerades at Steve Cropper while peaking in and out of space with well timed riffs.

The Marc Benno penned song; ‘Second Story Window’ follows the stirring opening of the LP and is notable for the recognizable crisp acoustic playing of one Stephen Stills. This song illustrates the ‘space’ that Coolidge felt her best singing was built around. The ethereal arrangement suits the song and Stills mountain top picking stitches together Coolidge’s robust throat and perfect breathing. A beautiful song.

Van Morrison’s ‘Crazy Love’ gets a R and B makeover next and features a knotted ‘Duck’ Dunn, Jim Keltner rhythm section supplemented by Booker T on black and whites. Van Morrison’s inherent soul aesthetic is drawn out of the ‘Crazy Love’ melody by Coolidge who is silhouetted in front the songs hot burning outlines. The band churns on alternating Stills and Bobby Womack guitars while the ‘Blackberries’ supplemented by Graham Nash shake it down with swinging gospel vocal support. An unfamiliar arrangement of a classic song accentuates the details and lends the listener a new found appreciation.

‘The Happy Song’ follows and keeps the lights low and the groove maple syrup thick. Coolidge bends down low with her best vocal of the first side of the record. The Otis Redding/Steve Cropper penned ‘Happy Song’ gets a heavy lidded workout with Coolidge oozing sexuality and groovability. Keltner enters into a relationship with the Burrito’s Chris Etheridge who now assists on practiced soul bass. Clarence White is again on guitar with the legendary Spooner Oldham flickering the keys. This is a heavy tune with an impressive cast of players who all add their individual personality to the track. The middle eight gets big and brassy while Coolidge’s vocals get transparent and provocative. This band is too good!

‘Seven Bridges Road’ closes the first side in epic fashion. A sparse opening through tress begins the song with Jerry McGee raindrop dobro and tickled Clarence White acoustic guitar. An inspiring swell rises with horns and the mystical resonance of an electric sitar. The song briefly reminds me of Jeff Beck’s version of ‘Morning Dew’ from the Truth LP in some respects. Here the atmospheric reading expands; the arrangement pushes and pulls against Keltner’s heartbeat drums increasing the gravity. Oldham’s organ makes the bed while the strings climb the steps into a glorious vocal Technicolor during the chorus. Brimming with dynamics, Coolidge arranges the simple song about a ‘girl and a road’ into a misty eyed glory of reminiscence and premonition.  There is a stunning call and response between Coolidge and the saxophone that raises the now soaring arrangement even higher toward its conclusion. The ‘Seven Bridges Road’ would later be covered by the Eagles in 1980, but this reading is doubtless the definitive.

Side two opens with goose bumps and a bad attitude. ‘Born Under a Bad Sign’ is the recipient of a creepy Bayou arrangement covered in cobwebs and followed by black cats. Booker T arranges his own number in a dual electric piano and organ attack with himself and Spooner Oldham. Ry Cooder stars on slide guitar illuminating the darkened street grove with metallic neck work.  Keltner dings the bell of his ride, rubbing the rabbit foot and initiating a relentlessly funky blues while White keeps one hand on the good book just in case. Gut bucket grooves to be found here. 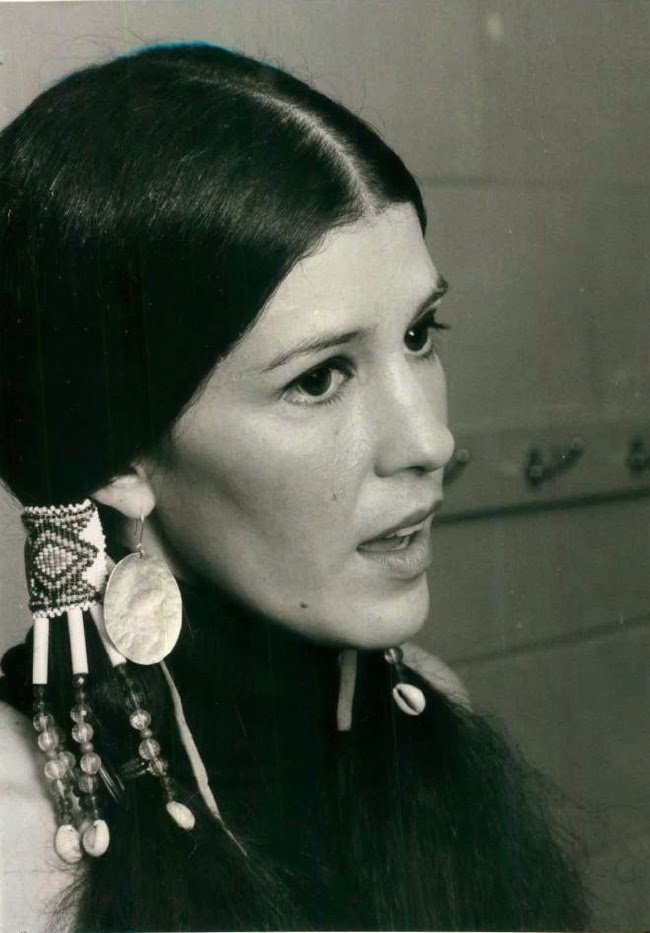 The ass shaking stomp of ‘Aint It Pecular’ appears next and opens by stepping on spongy Booker T. Fender Rhodes work. Soon after, Clarence White channels James Burton with some TCB Band chicken picking. When the horns honk in the intersection, the song hits the freeway at full tilt. Similar to Coolidge’s beginnings with Joe Cocker’s Maddogs and Englishmen and Delaney and Bonnie, here she offers up a big band arrangement with a husky soul attack in her voice.

Another Marc Benno penned song, ‘(I Always Called Them) Mountains’ mirrors ‘Second Story Window’ from side A in its gentle acoustic sense. This time Clarence White and Jerry McGee lace lines over Oldham’s acoustic piano foundation in a breezy optimism.  Coolidge’s voice appears from a thus far vocally deep and overcast side two, now radiating warm beams and hopefulness while expressing an organic diverseness.
‘Mud Island’ follows leaving dirt on the floor and kickingthe stoop in a dirty boot stomp. All of the usual suspects appear on the song, as well as Ry Cooder returning on bottleneck. This track is an up-tempo door slammer with the church choir not too far away up over the hill. Lots of guitar and percussion keep the field hollers afloat and continue to jam on toward the end as the vocalist fades away. There is ace material to be mined here, an honest example of no frill rockin and reelin'.

The LP closes with Neil Young’s ‘I Believe in You’ one of Young’s most enduring and affecting melodies. Here Coolidge delicately traces the outlines of Young’s intentions increasing the power of the melody through her earnest warm vibrato. Booker T. assists on bass, with Oldham, White and McGee acting as back seat drivers. Whereas Young’s original reading is sparse and cracked like egg shell, this version is full and sturdy though retaining the same sentiment. Backing vocals and plush instrumentation help prove the point.

Not only is Rita Coolidge’s 1971 debut album filled with an all star cast of backing musicians, it also features stunning Rita Coolidge vocals and a diversity of genres mastered by both the singer and the players.  Soon after the release of this LP Rita’s career would be pushed into the spotlight. She would continue to master genres throughout the 1970’s and 80’s and continues today, creating classics in all of the top charts. On her debut album you can witness her humble beginnings, while supported by friends and lovers and creating a multifarious collection of timeless music.

Posted by talkfromtherockroom at 3:22 PM