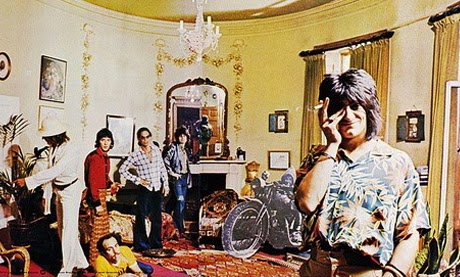 Currently spinning in the ‘rock room’ is one of those special rock records that is held near and dear to those in the know and becomes an amazing revelation to those who discover it.  In the ‘rock room’s humble opinion this record is one of the finest LP’s to come out of the 1970’s and possibly one of the greatest rock albums of all time. Those who frequent the ‘rock room’ know that I am prone to using the ‘greatest’ moniker frequently, but in the case of this album it completely deserves the highest praise. Ron Wood’s 1974 debut solo album, I’ve Got My Own Record to Do finds the famed guitarist on his way out of the ‘Faces’ and sliding into the ‘Rolling Stones’. In between, Wood recorded the aforementioned solo record with members from both bands and with a host of friends and fellow musicians at his home studio at ‘The Wick’ in South London. There is a high and lonesome, low and loose vibe to the record that comes across as clearly today as during the sessions that created it forty years ago.

Recorded over the course of numerous sessions from late 1973 and into summer 1974 the album is a unknown commodity to many. The recording, in fact, just celebrated its 40th anniversary with no reissue at all in the works in spite of the definite probability of a multitude of glorious outtakes available. The low key sessions resulted in a relaxed and often amazing collection of songs. With the sturdy rhythm section of Willie Weeks (bass) and Andy Newmark (drums) on the majority of the songs, a plethora of legends fill in the cracks including but not limited to Keith Richards, David Bowie, Rod Stewart, Mick Jagger, George Harrison and 'Faces' bandmates Ian McLagan, and Kenney Jones. Keith Richards actually showed up one evening and didn’t leave for four months, so he should be considered a member of the ‘house band’! The LP is brimming with potential classics and songs that would become the cornerstones of Woody’s own live shows throughout his career. One thing that is obvious from the enjoyment of this record is that it is the result of Woody patiently collecting stray riffs, lyrics and melodies and waiting for the appropriate time to document and share them. 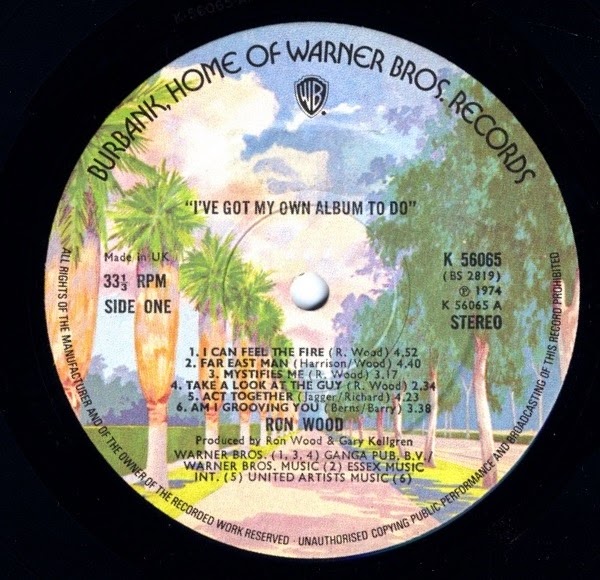 The album opens with thumping drums that pump like an old well signaling the Ronnie Wood composition, “I Can Feel the Fire’. The sweaty island groove is driven by the familiar Richards and Wood guitar weaving. The lyrics are sung by Mick Jagger and Wood trading verses and joining together on choruses. A careful listen reveals one David Bowie who also lends some well timed interjections. This song helped initiate Woody into the ‘Rolling Stones’ as it was the collaboration between Wood and Jagger on this song that also helped to birth the Stones classic, ‘It’s Only Rock and Roll’. Jagger got help with 'rock and roll' and Woody got help with 'Fire' and the Stones gained a future guitarist.

The second song on side 1 is a George Harrison composition, ‘Far East Man’ which also features Hari on slick slide guitar and dreamy backing vocals. Harrison would also record the song for his own 1974 Dark Horse album, but this version nonetheless contains the mojo. Mick Taylor takes the bass playing seat, locking in with Newmark on the funky high hat driven chorus groove. The ‘rock room’ lives for songs like this, tucked away on a dusty vinyl side waiting patiently for the needle to drop. Harrison’s aforementioned slide work dresses the song in musical silly string, coloring the structure with perfect exclamations. The song doesn't just exist sonically it lives organically.

Keeping the tempo jive and the lights down low, Woody’s ‘Mystifies Me’ is a high caliber soul ballad featuring Rod Stewart’s rhythm section of Micky Waller (drums) and Pete Sears (bass) as well as Stewart’s acoustic guitar playing mate Martin Quittenton. A dispersed and airy arrangement develops with Woody’s slowly dripping  and watery Curtis Mayfield central licks pooling around the songs base. Wood sings the shit out of this one, sounding like his future band mate Keith Richards at points. The chorus discovers Rod Stewart also singing in gritty harmony and taking the emotional content to an ascendant level.  In addition, Wood’s ‘Faces’ mate Ian McLagan loans a transparent sheet of mystical organ laid gently over the track for good measure. Beautiful. Classic.
‘Take a Look at the Guy’ follows in the same vein as ‘Can You Feel the Fire’, the song is high tempo, percussive and propellant with a multitude of rock riffing courtesy of Mick Taylor and Woody. The collaborative vocals again find Stewart tearing fabric and shattering glass with his diaphragm push on the chorus. The song climbs the rungs then fades out into an interesting groove that dissipates way too soon! I wonder if a deluxe edition of this set would reveal where this interesting eventuality would lead?! A smoking rocker. 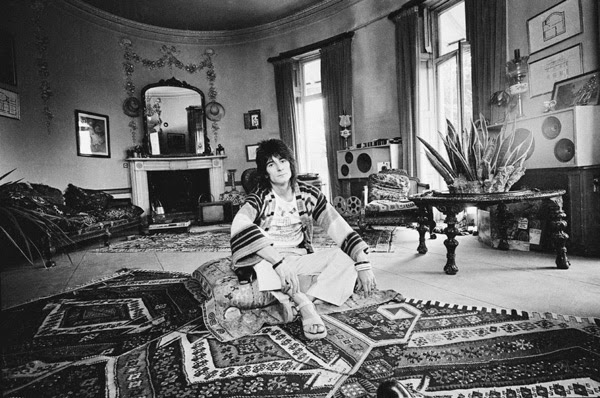 ‘Take a Look at the Guy’ segues quickly into the mushy Fender Rhodes introduction of the Jagger/Richards composition ‘Act Together’.  There is a substantial chorus of backing singers featured here that add to the grandeur and quality of the song. Richards and Wood again join together on their axes as well as sharing a microphone, chopping angular funky riffs, crooning earnestly and constructing the body of the song. Richards also overdubbed some piano allowing for ‘Ian McHooligan’ to fill the empty space with whistling musical organ glue, lending the song its large secular feel. The true definition of a Glimmer Twins, 'lost classic' thankfully donated to Woody's musical mission.

The quality first side of the LP concludes with a  hard and deep thrust cover of ‘Am I Groovin You’ first recorded by Freddie Scott in 1967. Here Richards and Wood slash the beat into ribbons, while alternating abrasive and chunky chording. McLagan lends the deep black groan of an ARP synth that injects the song with a guttural growl. This song is what one might have referred to as a ‘panty peeler’ back in the day, but we will not say that too loudly. Wood has slowed down the original version of the song to the tempo of a clogged drain. The song marinates its respective groove in the perfume of the songs subject,  her hair mussed while Jagger, Richards and Wood beg the question, ‘Am I Groovin You?’

The flip side of the record begins auspiciously with the Wood composition, ‘Shirley’. The song is uniquely arranged with spiky guitar and some tubular sound wave keyboards. Once the track settles in with Mick Taylor’s bass, Woody plays some of his most intense licks on the record. During the mid section of the track Woody proceeds to throw a ball down the stairwell, bounding into some joyous reverberant riffing. His overdriven guitar touches the burned edges of distortion while also running concurrent with McLagan’s keyboard for well timed dual quotes that blend into a sugary sweet rendition of the songs melody line. This tune sets the theme for the entire second side which feels much more like an unbuttoned jam session and lends the listener an ear to the outside door of the sessions. The cigarette smoke, laughter and assorted powders are tangible through the aural spread. Witness to this effect are the swaying arm in arm group vocals that make up much of the second side's singing. 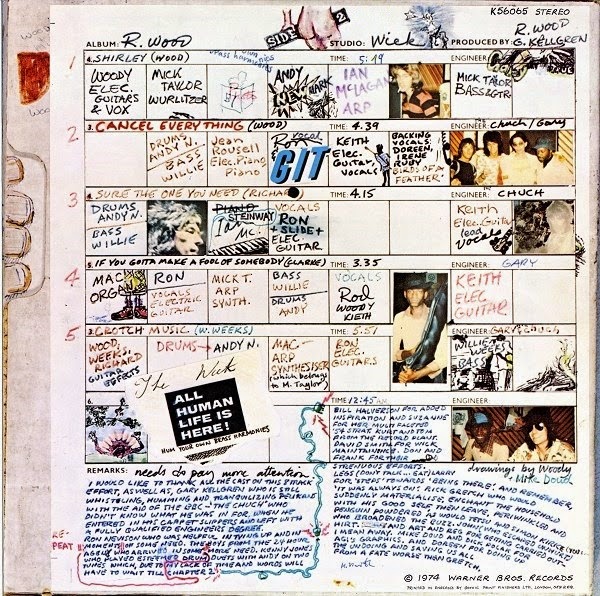 ‘Cancel Everything’ comes next, another concealed classic from the pen of Ronnie Wood. Painted over in a florescent highlighter, Keith Richards backing vocals on this song are wonderful and easily initiate a shiver and a smile. Fantastic stuff. The track settles into a slot like an intentional gutter ball becoming a high tempo plea to just save some time for one another. This time Jean Rousell shakes the keys lending the song a twinkling beauty that contrasts the edgy guitars coming from Richards and Wood.

‘Sure the One You Need’ is the second compositional donation by Jagger/Richards and offers another chance for the band to boogie and also for Keith Richards to take a lead vocal. McLagan bangs on the black and whites like a cop responding to a house party. Woody gives us some neck as the two guitar blend gives this a long lost ‘Stones’ feel….I wonder why?

The LP then reaches its conclusion with a duo of cover songs, the first, ‘If You Gotta Make a Fool of Somebody' is a song made popular by James Ray, who took it to the R and B charts in 1962. The song feels tailor made for Wood’s group the ‘Faces’, who could take a classic R and B cover and make it uniquely theirs. Both Stewart and McLagan play on this one along with the ‘Stones’ Mick Taylor and Keith Richards who also squeeze onto the instrumental couch. Rough hewn and heartfelt, this song best epitomizes the intent and vibe of the sessions.

The album then closes fittingly with a substantial six minute jam, the Willie Weeks composition ‘Crotch Music’. The song opens on the electronic pulse of a drum machine which is soon joined by skin covered drums. Weeks is clearly the focus with his nimble fingers plucking out a smooth lead bass line right off the bat.  What mobilizes the song is the scratchy rhythm licks scrubbed out by Richards and Wood that develop at a dizzying and accelerating groove. Toward the conclusion of the jam Wood comes in unannounced and spreads a buttery phased guitar line that jumps from my speakers. This is a tight hip thrusting jam with unique jangling changes, tight pants and interlacing guitars that cause the ear to thumb through the song for additional surprises. A fun finale and proper conclusion to an album where the joy ascends from the grooves with every listen. 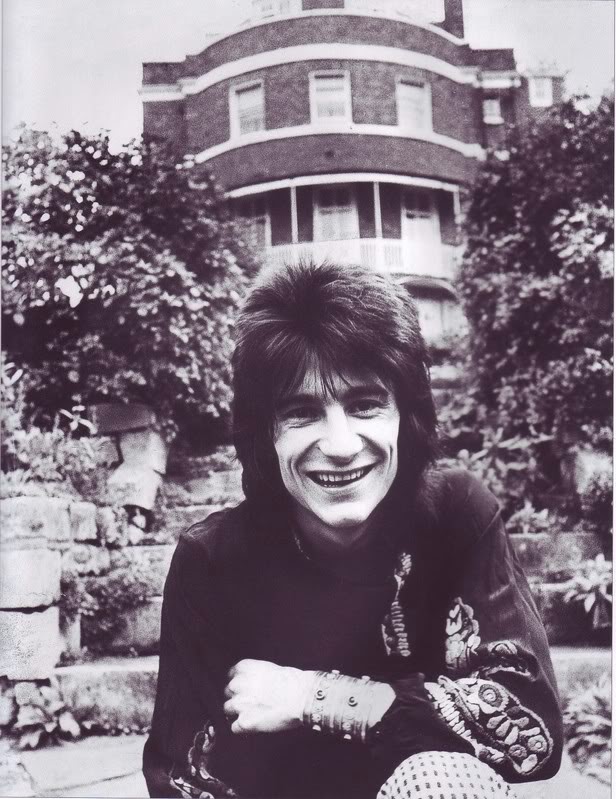 While Ronnie Wood is currently and famously recognized as Keith Richards better half in the Rolling Stones, his career spans numerous solo LP’s, his work with the Faces, as well as his early work with Jeff Beck and numerous other artists. His innate musical talents have offered an original and recognizable aesthetic to any creative outlet he has been involved with. His 1974 debut solo LP, I’ve Got My Own Record to Do is the cumulative effect of what he had learned, observed and created from his earliest days in rock and roll. The album is the result of Woody reaching a creative peak, his ambition to be recognized on his own merits and the karmic payback from all of the musicians he befriended and worked with throughout his career. The album is SO deserving of a deluxe edition with plenty of outtakes and bonus tracks we can only hope it happens in the future. The ‘rock room’ wants to spearhead this movement! But in the meantime throw the original LP on the platter, it’s all we got, but it sure is quite enough.

I've Got My Own Record to Do (Entire)
Posted by talkfromtherockroom at 2:11 PM

Email ThisBlogThis!Share to TwitterShare to FacebookShare to Pinterest
Labels: Faces, Harrison, I've Got My Own Record to Do, Jagger, Keith Richards, rock room, Rod Stewart, Ronnie Wood, talk from the rock room, The Wick, Woody