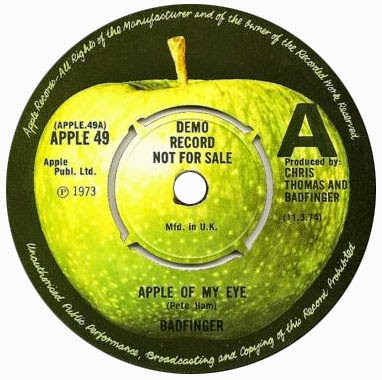 In today’s edition of ‘Take One’, the ‘rock room’ will analyze ‘Badfinger’s final single for Apple Records as well as one of guitarist/songwriter Pete Ham’s finest melodic constructions. The song ‘Apple of My Eye’ was released as a single in December 1973 is support of Badfinger’s final full length LP on Apple Records titled, Ass. In what had become Murphy’s Law for the group, their final release prior to signing a new contract with Warner Brothers was fraught with drama and difficulty. Due to financial issues with the Apple label as well as release conflicts, the single was forgotten as quickly as it was released, with no picture sleeve issued and promotions few. The track would be the final non-Beatles single to be released by the label.


In addition to being the only single to come from the Ass LP, the Pete Ham composition was also the opening track on the album. This factor is an obvious statement on the strength of the songwriting and of the dynamics of the melody. The song is a mid-tempo ballad that features textured instrumentation and always earnest Pete Ham vocals. Ham composed the song while inspired by his emotional conflict regarding the band leaving Apple Records for Warner Brothers. Ham, as well as the entire group was torn due to their inherent loyalty to Apple, combined with their hopefulness to create a career free of the Beatles influence and based on their own abilities and talents. Lyrically the song contains this aforementioned message of farewell and thanks to the people of Apple, but at its core, still remains the perfect love song.

The true definition of the term ‘Apple of My Eye’ is stated as ‘the one who is held above all others’, while it can also refer to the actual pupil or the round dark center of the eye. Ham’s superior songwriting and astute compositional abilities used this saying to create a musical statement on his internalized feelings about leaving for supposed greener pastures. ‘Apple of My Eye’ successfully compartmentalizes and disseminates these conflicting emotions through distinguished melody and superior musicianship. 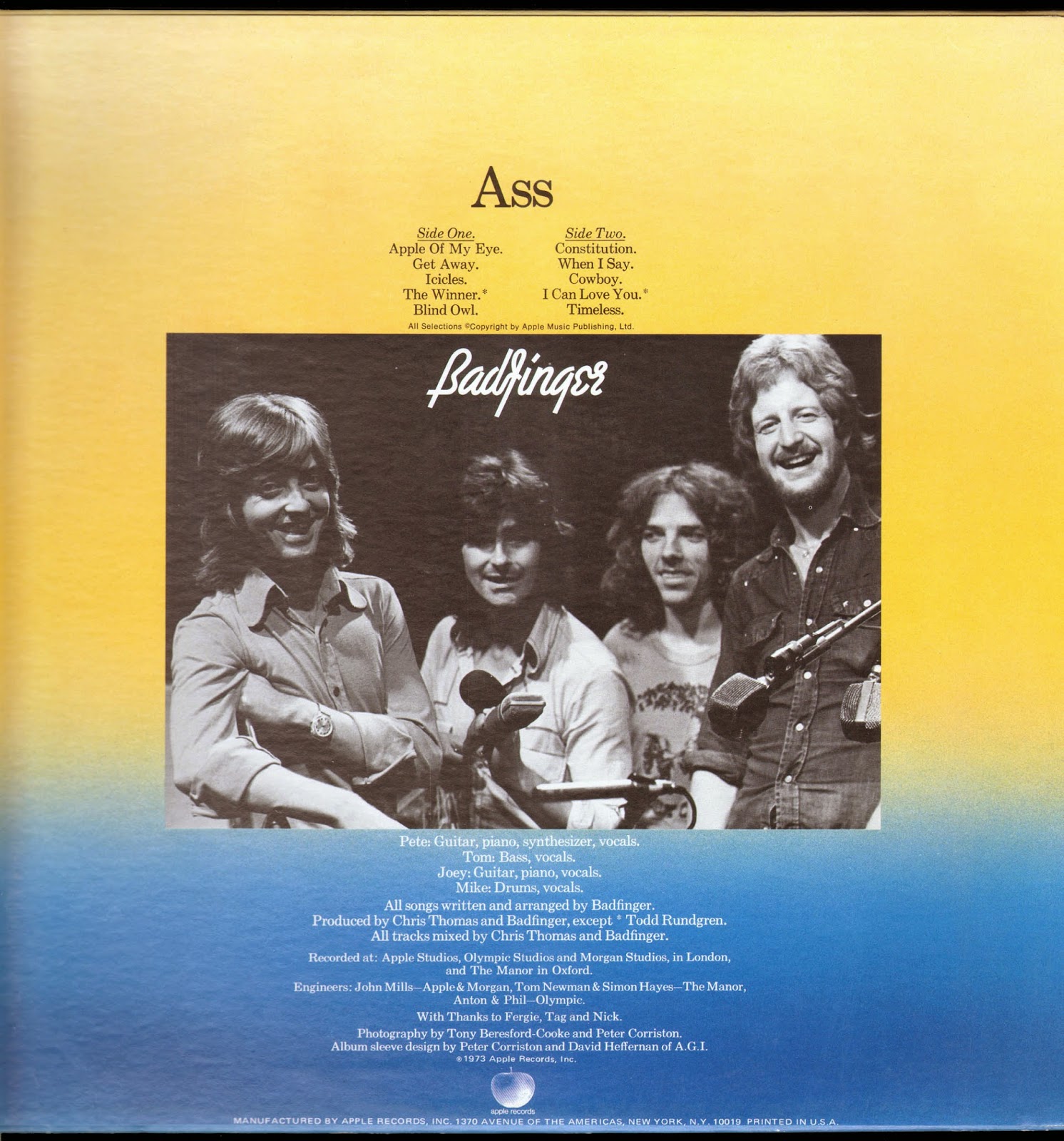 Oddly enough, the Warner Brothers and Apple contracts ran concurrent causing both Ass and the band’s self titled debut for Warner’s to hit the marketplace at roughly the same time. This, in effect nullified any possible success of either album, confusing the public and saturating the market. Apple Records would ironically choose ‘Apple of My Eye’ as the single from Ass even after the group had already removed themselves from the label. The song acted as a fitting statement of finality to a musical relationship that had its ups and downs, but in the end concluded with a mutual respect on both sides. A musical ‘Dear John’ letter if you will, concluding the relationship through an honest expression and recall of shared past glories. The released single would be b/w the wildly flapping Tom Evans track ‘Blind Owl'. 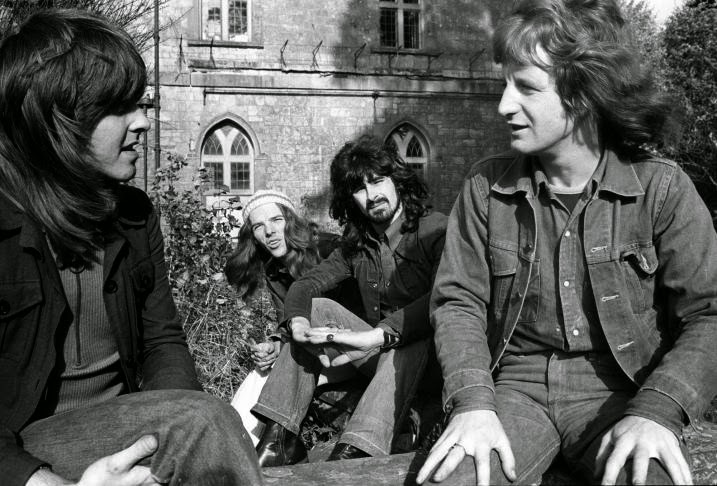 In typical Pete Ham lyrical fashion, his sensitivity is put under glass for the listener to study. The song opens with solitary vocal apologizing for having to ‘move away’, the honesty and icy regret in Ham’s vocals reflected deeply. The melody, so delicious, is traced leisurely, warmed and stretched.. Bass, drums and resplendent acoustic guitars fall into line, steadying the melodic vocal weaving. Think of George Harrison’s early 1970’s arrangements that make use of stratified and marching acoustic guitars, the feel here is similar.

The fair haired strumming gives way to a short but dramatic instrumental break that eventually becomes more assertive and definite as the song continues. As Ham begins to sing the the second verse of the song, a spectral Moog line drifts through the sonic spread and ghostly ‘oooh’s’ slowly drip from the songs juicy center. Evans bass is gently understated. Ham harmonizes with himself, double tracked on certain lines, drawing out the light detail and heavy importance of the statements. The mid verse breakdowns sprout fresh green leaves from single picked descending guitar notes from Molland that work in conjunction with Mike Gibbins well timed cymbal splashes and the distant mountain backing vocals. All of these detailed elements collaborate to design an orchestrated addendum to the song proper. 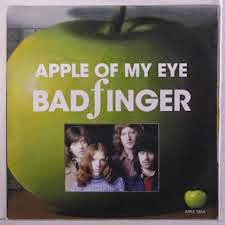 With verse three, Ham repeats the first verse again, this time with a sticky sweet keyboard counter melody that whistles underneath the central vocal refrain. His singing is effortless and genuine; I believe every word that he sings, as if he is sharing a special personalized secret. It’s unfortunate that this song was a victim of business, musical politics and missed opportunity because in the ‘rock room’s opinion it has been touched with the special magic that other underrated and compelling Ham compositions such as ‘Name of the Game’ and ‘Midnight Caller’ contain. Ham’s songwriting strengths are epitomized through the song, illustrated by deft production values and exceptional instrumentation techniques.

‘Apple of My Eye’ is a fitting conclusion to the Apple Records career of Badfinger and in a way signals the beginning of the end for the group. Their two Warner Brothers albums would fall victim to shady accounting and underhanded business practices resulting in the 1974 ‘Wish You Were Here’ LP being pulled from the shelves; in effect negating the LP’s amazing collection of songs.

Unfortunately, the song ‘Apple of My Eye’ never penetrated the charts deeply, or became popularized in ‘pop’ terms.  It does exist as a beautiful and honest expression of thankfulness and love that fans of the group can continue to revisit. The track exemplifies everything amazing that had happened to the group in their early career with Apple, while unfortunately foreshadowing the trouble and tragedy still to come.

Apple of My Eye

Posted by talkfromtherockroom at 9:16 AM