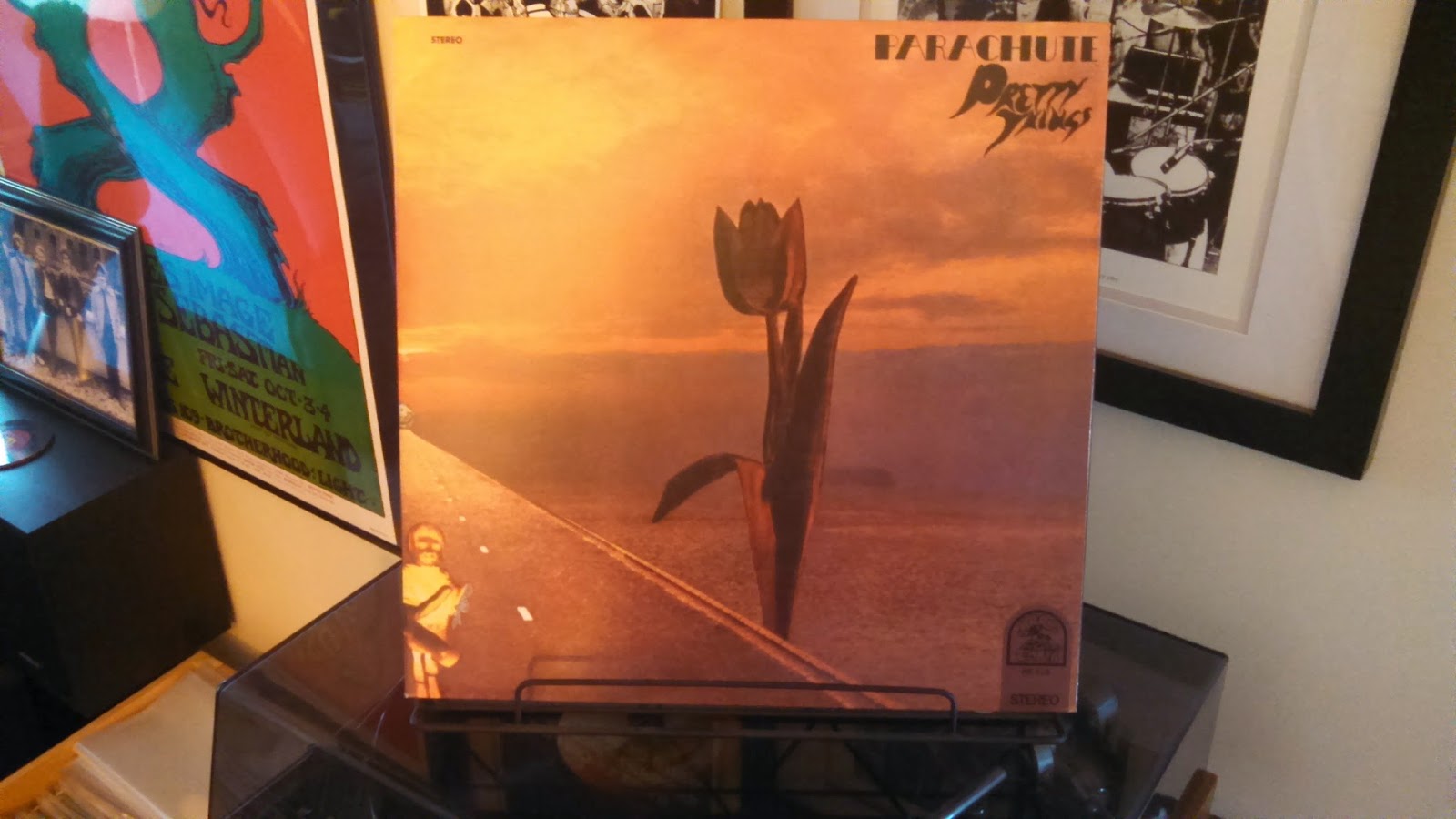 Spinning out an imposing psychedelic vibe in the ‘rock room’ today is a somewhat forgotten record in the annals of classic rock. The Pretty Things started out a rough and ready blues band in the mid 60's and by the 1970 had become a growling multicolored hallucinatory beast. The band is responsible for the first thematic 'rock opera' (S.F. Sorrow ) as well as being the group who commandeered Beatles engineer Norman Smith for their own recordings. They reached the lofty heights of their musical summit with the subject of this rant, 1970’s Parachute.

Recorded at Abbey Road studios in 1969 the LP contains a familiar and successful ambiance. Pop songwriting mingles with syrupy blues figures and all out psychotropic explorations. The LP f*cks with your head, guitars disengage and then reconfigure, strange sounds slither through the prismatic stereo image and the vocals by Phil May range from  soft and comforting to a raging pissed off punk. The first side of the LP plays as one piece, each song segues into the next, musical reflections gleam off of sparkling folk melodies which then morph into shady all out consciousness assaults. The lineup for this fifth album in their discography is as follows, Phil May (Vocals), Wally Waller (Bass, Guitar, Vocals), Jon Povey (Keyboards), Skip Allan (Drums) and Vic Unitt (Guitars).  The band recovered nicely after founding member and songwriter/bassist Dick Taylor and drummer Twink left the group for greener pastures. Both May and Waller took up all of the compositional jobs creating a cohesive LP that speaks to the ‘Hippy’ generation about their ideals yet warns them about the encroaching darkness from a world hell bent on development and mind control. The strange cover of the LP illustrates this with a flower emerging from roadside concrete while surrounded by a menacing red sky. A human constructed spire rises from the other side of the dividing road as a spectral child looks one hand extended.

My needle descends and caresses the grooves urging from out of aural darkness a shimmering rumble wave of sound emerging and suddenly segueing into a flashing and stereo manipulated acoustic strumming. With my ears slightly spun , Allan’s drums tumble into the  jagged jerky and aggressive prelude of ‘Scene One’. The song slams against the walls of a padded room before stopping suddenly and falling backwards into the comfy cotton thump of ‘Good Mr. Square’. This track elicits a lost White Album song; the Abbey Road Studio walls suit this one well. Thick thumbed bass lines and a clean acoustic shading, decorate around the edges of Povey’s space minstrel key striking.

‘Mr. Square’ segues into and out of ‘She Was Tall She Was High’ which acts more as an addendum to the ‘Mr. Square’s verses than a separate song. Glory hound vocals sound while the chunky guitars proceed chop the chorus into tiny bits.‘In the Square’ begins soon after, emerging from empty mist, straining to see a diluted and mystical woman muse. A drumless melody drifts and Phil May’s vocals are a gentle paisley, glistening like a night time beacon appearing from the expanse of a distant sea shore. Its silvery simplicity and circular music box melody expresses a dreaming hopefulness, but still in the back of its mind a questioning apprehension. Is the song a hallucination? The song moans on without drums, its subject looking, before segueing oddly through a vocal line into the next song, this being ‘The Letter’.

A groovy descending lick, cheerfully buoyant and deftly arranged. The song is a spring time whistle as May opens his post box excitedly, his anticipation tangible.The song retains a nervousness when the frizzed out guitar enters and echoes the slowly developing melody back in a distorted reflection.

The song dissipates quickly into a tunnel and appears from the other side donning the acoustic opening sprinkling of ‘Rain’. Soulful and funky ‘Rain’ takes up where the ‘The Letter’ left off thematically. Musically, the now serrated rhythm tumbles like black storm clouds over dark hills.
After a mellow beginning, electricity surges into the albums bones, the current transported by the slick wires coated by 'The Rain’. Unitt’s concluding solo pours, streaming out of a formless vessel. The song then develops into a choral mantra and a run for cover lineup of tightly coiled  Vic Unitt guitar licks the fade into the horizon. The sound of a storm passes, before the music jumps into the chugging and smoky psychedelic bed of Mrs. Fay Regrets. The song is a day-glo proto punk painting, a road song for the traveler who gave up long ago. Featuring what I feel is the best riff of the LP, bass and angry guitar pass a suprise late night sobriety test then return to the car chuckling.

'Cry’s From the Midnight Circus' closes side one and harkens back to their Dick Taylor early influence with a gritty gravel blues lick. The aural mix of this tune is a prismatic, transparent and heavily hallucinatory. Guitar swells pass like late night street signs leaving trails in their sonic wake. The  mid song organ solo spits a thick musical sickness over the schizophrenic blues. Is it a distorted vocal solo, tweaked out organ, or an alien communication? The verse reappears scattered amongst razor slices of guitar that drowned out the weary street harmonica that emerges from the undulating musical mists. This tune is a definitive example of pure undiluted psychedelia from the tap. Drink up, this one is a rock room favorite and an obvious must hear classic. A circular jam develops toward the tail of the track, Unitt and Waller take the song around an atonal turn and behind the circus tent as freaky eyes glance over  shoulders before quickly looking away. Tension develops and the makeup of a broken clown drips into rich colors onto the dirty ground.  The jam is representative of a musical strangulation and could continue on, but oddly fades to black even as the band continues to make pointed glitter bombs with their strings. Regardless, this is a highpoint of the record and a must hear for rock fans of the 1960's-1970's examples of tripped out blues. 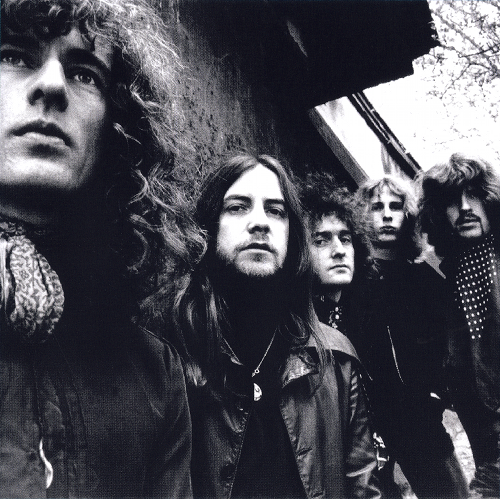 The record is flipped and side two sprouts. The song 'Grass' is the  perfect prelude to the insanity to follow. Fingers are laced and hands are behind the head lying in the ‘Grass’ while counting clouds. The groove asserted is comprised of the soft wax of bees, sweet and thick. I visualize an earth angel, a theme that continues to reach my mind’s eye throughout the listen. She cries out as her spiritual life forest is paved over by the heaviness of the metropolitan surge. The song approaches a sneaky dual guitar solo where smoothed string snakes rest clandestine under the cool shadow of the willow. The muted tone of the expressive instrumentation is comforting, yet slightly menacing. The second solo turn increases the charge while a green organ lays a thin layer of veneer beneath the groove.

An audio verite’ count off begins the stubborn march of ‘Sickle Clowns’ which because of its insistent driving groove stays remarkably tightened down until stripped. The curved edge of Unitt’s guitar tone cuts so deep and perfect there is no pain just the clean flow of blood. The spherical groove does not deviate from its mission, it only encourages musical mind travel through its persistence. After an extended quivering arrow of a guitar solo in flight, the sharpened strings drop out of sight and the throbbing percussion appears in full tribal motion. Momentum is continued, built and released and when the vocals return both hands of the clock are meshing at the correct time. May growls the lyrics, tearing flesh, ornery, telling the tale of the endangered rock and rollers, down by the lake gathered around a defiant fire. Eventually they must be eliminated. Heavy duty and what the Pretty’s were all about, this track is summed up in the extended jamming and originality of the lyrical premise. 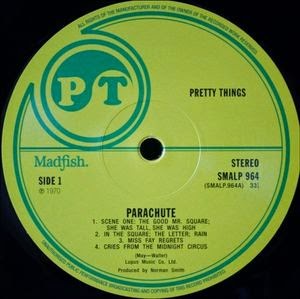 The diverse and druggy ‘She’s A lover’ is erected in three part watery chorused guitars. The song is musically squirrely as it bounds from branch to branch unsure, before engaging in a mid song guitar dual played against broken door waltz figure. The track spreads like differing colors of paint just touching on a creator’s pallet, just blending shades and blurring lines enough. The tune finallt coagulates around a rubber ball guitar lick and a flashlight keyboard figure that keeps things sufficiently strange yet glued together. The falsetto choruses are additionally enveloped in deep blue fuzz licks from the overdubbed guitars which add an additional layer of intrigue.

‘What’s the Use’ follows and swings like a back porch sing-along in Andromeda and fits well in the LP's flow while acting in perfect contract to its respective partners on side two. 'Byrd' like bell guitars chime in thumping time before the songs Skip Spence recitation of the chorus skips into a repetition. A strange song, a tale of of resignation, that keeping with the developed theme of the record shows off its diverse production and willingness to experiment, lending to a genre smushed expression of music.

A tinkling lounge piano drips off of the table and onto the empty floor. The title track of the album Parachute concludes the LP with a bass and guitar backing that focuses on the milky three part harmonies. A melody that elicits leaving, the groove has a Pink Floyd personality trait that is magnified as the drums enter. The song slowly drifts to the surface, a witness to decay and wonder. Each instrument approaches the concluding destination of the album, given a part to play, writing a final line to the story. The songs final note is played, a star red siren that expands its pitch, rising higher and higher until it is only audible to the ears of a canine and then reaches such a height it has no choice but to melt into black and the run out grooves of the album.

Parachute does tell a story, it’s a tale that is as complex as the music used to disseminate the idea. The recording has received accolades and notice, but it still remains hidden behind the era's substantial volumes made by the Beatles, Pink Floyd and other contemporaries of the band.  The group's 1968 LP S.F. Sorrow was not made in a vacuum, it was the beginning of a highly creative period of music making by a band that had even changed out some of its vital members. The album has since been reissued and is available with a host of outtakes for those who want a bigger aural picture of the sessions that birthed this masterpiece. Take the leap, the Parachute is sure to open.

Posted by talkfromtherockroom at 3:57 PM