Little Feat - 'Roll Right Through the Night' - Live in Holland 1976 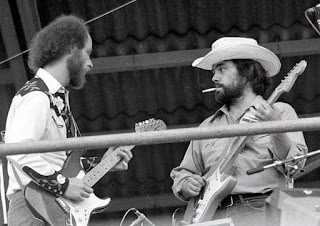 Featured in the ‘rock room’ today is an aural and visual feast of prime ‘Little Feat’. Spotlighting the band at the 1976 PinkPop Festival the Little Feat Live in Holland 1976 CD/DVD combo displays the band approaching the prime that would be musically expressed on the legendary live album Waiting for Columbus recorded in 1977. Here, the group plays an hour set and headlines the festival that also included ‘Uriah Heep’ and the ‘Outlaws.’ There are two songs included on the audio CD that do not have accompanying video, but otherwise the entire performance can be found between both discs. The pro shot video footage is vibrant and clean, the audio is a more than acceptable soundboard. One has to wonder what the delay has been in releasing this glittering rock gold to the public.

The footage finds the band in stellar form and supremely funky. Lowell George is fluid in his playing and his vocals are strong and assertive. His appearance is stoic and his performance masterful as he stands center stage with cowboy hat and tucked in button down shirt. Its performances like this one that illustrate the supreme talents of George prior to the health and drug issues that later affected his playing and songwriting. Barrere appears to be feeling no pain, red eyed and bouncy he disseminates a number of inspired solos over the course of the performance. Payne is his usual masterful self drizzling the diverse Feat arrangements with Rhodes, Moog and organ dressings. Rattling like jailers keys the rhythm section comprised of Gradney, Hayward and Clayton lock up the poly rhythmic grooves behind bars. This is the definitive version of the Feat and an absolute essential addition to any rock collection.

While the crowd sits on their hands for the opening segments the band stirs up a masterful set that by its midpoint cajoles the crowd to join in with the on stage celebrating. The concert opens with the favorite and standard opener ‘Skin It Back’ sung by Paul Barrere. Taught as a rubber band reaching its capacity the band snaps into the tight reverberant groove. The opening solo taken by Barerre is a highly charged and chorused departure from the theme and drops perfectly into the percussive opening of ‘Fat Man In the Bathtub’.

Without missing a beat the band slips into ‘Fat Man ’ using Clayton and George’s dueling cowbells to prompt the change. George’s cartoonist compositional sensibilities are on full display with this Feat classic. George’s perfect pitch is also spotlighted as his vocal investment can be studied in great detail with the accompanying video footage.

'One Love Stand' follows and exists only on the audio portion of the concert and settles into a chilled out groove based around the songs central descending riff. Te laid back attack allows the crowd to gather their senses momentarily. It seems as if the sound improves somewhat here with the recording receiving a bit more of the higher end.  Could just be me.The music becomes airy and takes its direction from the breeze. With the new direction the song seamlessly becomes the next, dropping into the opening of ‘Rock and Roll Doctor’ on a perfectly timed Barrere guitar strike. 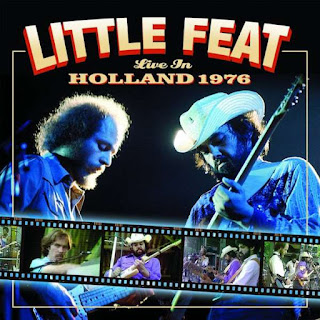 George dons his scrubs for the musical check up. A thick southern fried funk is driven by Hayward’s left right drum punches. George is loose, singing flawlessly both vocally and with his blonde Stratocaster. When the band slides back into the verse following George’s sensual solo prepare to feel musical magic, the chills start, the groove hardens and you just wanna lean waaaay back with your eyes closed and go there.

Shaking me from journey, Payne’s up tempo travelogue ‘Oh Atlanta’ changes the tempo from the swampy to the incendiary. The live vibe on this track is a highlight of the recording. No slickness here, just raw rockin and good time rolling. The collaborative vocals on the chorus are a joy to groove on.

The dynamic Barrere/Payne composition ‘All That You Dream’ comes next and chugs it way into the songs anthemic vocal opening. The soulful R and B groove epitomizes everything that ‘Little Feat’ is about. Gradney is all over it it with a playful bass line that he reiterates with each body movement and facial expression. The middle of the track becomes a syncopated bed that Richie Hayward highlights in florescent yellow with his hi hat strikes and cascading trips around his kit.

‘Cold, Cold, Cold’ is where the set really takes off. There is a tangible feeling that band knows they are knocking it out of the park illustrated by the following three song mini suite. George reveals his most amazing playing of the evening with his heavy 11/16 Craftsman socket scurrying across his beautiful blonde Stratocaster resulting in a series of stunning and flashing quotes. His vocal attack reaches the same lofty standard ranging from honey sweet to stone on stone gruff. Close up shots of his delicate finger picking tickling the taught strings is worth the price of admission alone. Contained within is some of the most inspired slide playing you will ever witness. Payne makes the bed of the instrumental jam with a keyboard base that squishes underneath Hayward’s heavy handed drumming. At this point on the video the entire group is busting a collective nut and before you know it they have slid seamlessly into ‘Dixie Chicken’.

Probably the most well known ‘Little Feat’ track by this point in the bands career it had become their centerpiece song and somewhat of a jam vehicle for the band. George slyly changes the lyrics to reflect going walking on down down to Amsterdam. Payne and Barrere face off during the intro groove serving each other a series of riffs that result in a pleasing little call and response leading to the vocals. Between the verses the egg cracks revealing unique jamming, highlighted by Payne taking a milky Rhodes spot and Barrere taking a marvelous solo spot featuring some ravishing playing. George soon joins in, cigarette hanging precariously from his lips and slight smiles as he watches Barrere ‘get off’. The two guitarists soon collaborate, provoking the solo segment into a smoke rising dual guitar salvo.

Again, there is no pause as the song segues stunningly into the rock and roll stomp and delicious dance groove of ‘Tripe Face Boogie’ from 1972’s Sailing Shoes. The band moves through this songs tasty rock changes before reaching a instrumental intersection that lets Bill Payne journey off trail with another extended and watery Fender Rhodes solo. Heavy. The rest of the band joins in with assorted percussion accents while Payne shakes his ass at his keyboard station. Hayward starts a banging psychedelic march that nudges Payne into another series of improvised soloing this time along with Barrere's wah-wah'd guitar. Payne dynamically brings the mixture to a rolling boil and George follows by serving out a substantial sampling of slide that takes the jam to another lofty landmark. Running out of room on the neck George brings his solo to a peak by touching the tippy top of the sonic spread of the strings, squinting as he reaches his instruments limits. This song segue would later be immortalized on Waiting For Columbus, but here it is played with a rough and ready abandon, reaching smile stretching peaks. 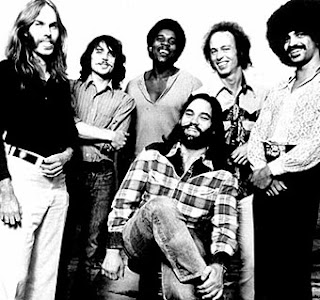 ‘Feats Don’t Fail Me Now’ closes the set proper and gets everyone involved from the stage to the crew to the assembled crowd. Payne gets the jam moving with a steady jog across the keys before the bass and drums follow on his heels. Gradney and George grab some percussion to assist in eliciting the groove which slowly becomes a collaborative review with everyone handclapping, smiling and shaking whatever happens to be close by. George tosses the maracas into the crowd and makes a humorous face after one goes rogue. Each member leaves the stage as the groove slowly fades to dusk, kept alive by the repeated refrain of ‘roll right through the night’. The band continues the song off stage circled around the mic like a tribe, organically driving the melody in a give and take with the crowd initated through their bodies and voices.

The band then returns to the stage and George lets loose with a few of his own soaring quotes on the theme vocally while the instruments start to puddle in. After reprising 'Feats', ‘Teenage Nervous’ Breakdown’ is unleashed from its ‘encore’ position. Literally playing out the song’s lyrics, the band teeters on the edge of musical madness, rolling through screaming ‘rave up’s charged by George and Barrere’s electric guitars. Bellowing tones coagulate into a boogie freak out and conclude the show in the only way anyone would want to see a rock concert end. My glass is raised and my mind is blown.

While ‘Little Feat’s’ 1978 live LP Waiting For Columbus would be and still is the definitive statement for the band, this weathered snapshot of audio with accompanying footage is a pure sampling of a band reaching their live performance summit. No overdubs or fancy posturing here, just straight up rock and roll soul music.

Posted by talkfromtherockroom at 5:26 PM