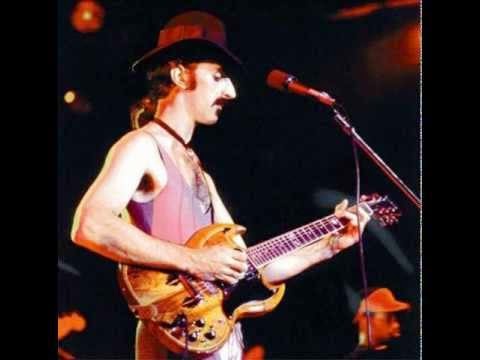 One of the most legendary musicians and frightfully intense concerts to grace an Upstate New York stage took place in the fall of 1978 at the Mid-Hudson Center in Poughkeepsie, NY. On September 21, 1978 Frank Zappa and his band appeared on stage for an extended fun and filthy evening of multifarious musical excursions. The circulating recording is a warm well-balanced line tape available through the efforts of an enterprising taper allowed to plug his rig into the soundboard. The resulting document captures Zappa’s 1978 big touring band featuring, Zappa, drummer Vinnie Colaiuta, Arthur Barrow on bass, Ed Mann on percussion, Tommy Mars on Keyboards, Denny Walley on second guitar, Peter Wolf on second keyboards and Ike Willis on guitar and vocals. The 3,000 seat venue in the midst of the Hudson valley would bear witness to a diverse, virtuosic and musically offensive performance that is still reflected on and talked about by locals and hardcore Zappa fans alike.

The existing tape cuts in with the show already in progress midway through ‘The Deathless Horsie”. The ambient instrumental jam offers a moody warm up for the band as well as an opportunity for Zappa to introduce the band and greet the assembled crowd. Breathlessly the band enters a song that ‘doesn’t rock at all,’ “Dancin Fool”. The percussive ‘disco’ flavored track warms the crowd with an addictive groove and intense show opening breakdowns.

'Village of the Sun' follows, is nicely extended and slips into a golden brown groove. The song rises midway into a easy and squeeze me keyboard jam that moves through some sunny landscapes and 'moog'd' undergrounds. The jam gets significantly out there moving through relentless drums chorded bass lines and shifty streaking stars of sound.

Sufficiently warmed up, the sets first cool down period comes with the sideways soul and religious condemnation of ‘The Meek Shall Inherit Nothing’. Group vocals, slide guitar and honky-tonk piano support the sarcastic glimpse of religious zealots. 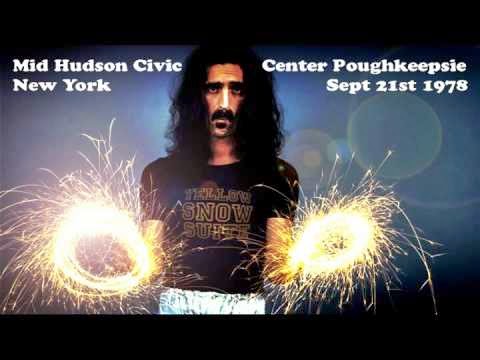 This featured set not only spotlights Zappa’s diverse musical arrangements but his increasingly ‘shocking’ and unabashed lyrical content. The collaboration of venue, era, set list and band, make this bootleg capture a must for any Zappa fan that was unaware of the recordings existence. “City of Tiny Lites” highlights some of the most aggressive soloing of the evening unfortunately cutting out before its conclusion and cutting in midway into the following “Pound for Pound”. Zappa unleashes shaded and dark soloing that eventually dissipates into a sweet guitar and keyboard dual melody quote that rolls together like a sticky bun in “City”. While the following instrumental, “A Pound For A Brown” expresses a jazzy sensibility and a thick spacey synth breakdown, showcasing the groups numerous improvisational talents.
Next comes one of Zappa’s most well-known tracks, “Bobby Brown” a single release in Europe, but a track not as well-known in the States due to its edgy sexual content. The main character of the song struggles with their sexual identity, played out through the lyrical playfulness of Zappa. A fantastic and humorous version of the melodically firm track is featured on this recording, a high point of the set. “Conehead”, another highlight of this early segment of the concert emerges from “Bobby Brown” with a pointed and funky groove. Zappa takes a phased and patient solo break that contains some of his finest playing of the evening thus far. Crisp sustains and lightning fast riffing highlight the central part of this jam. When “Conehead” fades into dynamic rhythmic support, Zappa then introduces “something weird” taking a unique trip with the twofer of “Mo’s Vacation” and “Black Page #2″.

The rare “Mo’s Vacation” flies the friendly skies with syncopated bells, jumpy percussion and variegated statements that amazingly the band required no musical notation to play. The instrumental segues into “Black Page #2″ another complicated and stratified musical arrangement that lends witness to the masterful musical mind of Zappa at work. This particular movement embarrasses Zappa’s contemporaries due to its illustrating multiple and stratified levels of melodic expression and individual mastery of instruments. The song rises and falls over tumbling waves of inspiration, jaw dropping and inspiring in its crisp execution.

As “Black Page #2″ feathers into darkness Zappa begins a rap about the ‘preposterousness of rock and roll’ and asks the crowd if ‘they feel it’ also. Zappa then takes some well placed body shots at Peter Frampton and also discusses how a panty-sniffing Wagner composed some of his musical works. The slow and sure “I Have Been in You” in initiated and is beautifully sung/spoken in Zappa’s greatest dry, one-eyed wink, vocal attack. ‘I Have Been In You’ is a classic Zappa segment and one continuous laugh riot of highlight commentary on the state of  rock and roll realities.

“Flakes” drops out of the sky suddenly, keeping its wispy promises through a plethora of spiky and complex riffs. The song pulses through multiple changes and commentaries on those certain people who cannot hold up their end of the deal. A solid version of “Magic Finger’s” rubs all the right spots while emerging from “Flakes” in a series of cascading licks that inflate the set to a ticklish peak. 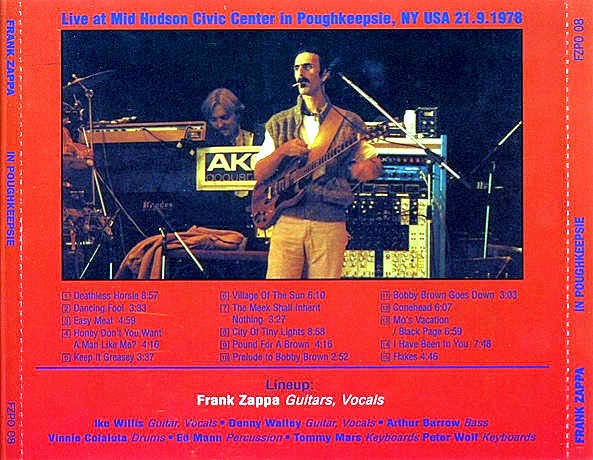 As if the preceding orgasm of music was not enough Zappa and band Lincoln log a medley of the “Yellow Snow” suite, containing the opening four tracks from Zappa’s 1974 Apostrophe LP. The crowd’s pleasure can be felt on the recording as the band pops into the shoulder swiveling and hip thrusting “Don’t Eat the Yellow Snow”. The suite continues with carnival blues of “Nanook Rubs It,”  “St. Alfonzo’s Pancake Breakfast,” “Father Oblivion” and “Rollo”. The aforementioned narrative is musically challenging, topographical, shockingly funny and another tick in the long line of highlights from this performance.
Zappa introduces the players as “Rolo” ends, concluding the main part of the set in animated fashion. The crowd pleads for more, their enthusiasm apparent on the recording. Zappa states that this will not be your typical encore and tells everyone to sit down for another ‘tiny show’.

Zappa then digs into his “Mothers of Invention” catalog for an expansive rendition of “Little House I Used to Live In” from 1971’s Burnt Weenie Sandwich. A moody version, with room left for all band members to receive a spotlight segment. This is not your typical encore, but a mind expanding and twisted compositional display.

The show puffs out its chest for the next series of songs that not only pay witness to Zappa’s extreme abilities and guitar prowess but conclude the show in an awe-inspiring fashion. The aggressive pulse of “Tell Me You Love Me” “Yo Mama” and “Black Napkins” allow the Zappa orchestra to let it go. “Yo Mama” is the showcase for Zappa to deconstruct and build again the songs internal workings through his fretboard. The air gets thick, the music tense and Zappa’s guitar work dense as the arrangement allows for ample exploration. Guitar aficionado’s alert, the central core of “Yo Mama” is a clinic, an organic and spectral aural event.

The encore and performance concludes with ‘Black Napkins’ originally from Zappa’s 1976 record Zoot Allures. Similar to the preceding ‘Yo Mama’ this track allows Zappa to disseminate his guitar work in another context. The smoldering R and B groove ignites with Zappa’s round quivering notes, leaving only shadowy metallic remains on the constructed musical bed. A series of punctuated ‘thank you’s’, and the show is over.

Zappa’s 1978 visit to Poughkeepsie, NY left an indelible mark on Zappa’s touring history, fans, and collectors as well the community at large. A muscular performance and collection of songs that through the foresight of tapers and of Zappa’s crew is now immortalized for future fans and musicians to enjoy. A bootleg of the highest quality.