Rolling Stones: 'The Silk Sheet of Time' - From the Vault The Marquee Club Live in 1971 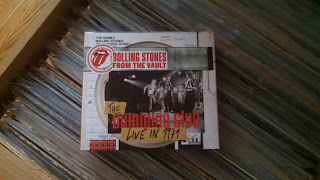 The most current edition to the Rolling Stones From the Vault live series is a concert performed in the intimate confines of the London, England Marquee Club in the Spring of 1971. Filmed for American television the performance finds the Stones in stellar road shape as they had just concluded their UK tour. The small crowd numbered only in the hundreds and featured many of the band’s contemporaries including former Yardbirds Clapton and Page. The video and audio of this fine performance is rainy day jamming today in the 'rock room'.

This was an exciting time for the band spotlighting what many consider to be their finest line up and most incendiary musical moments. The band had their legendary LP Sticky Fingers in the can for a release a month after this featured March 26th performance and used the opportunity to showcase a few of those tracks for the assembled crowd of lucky fans and VIP’s.

Long available on bootleg, this new official release combines the remastered soundboard recording and newly restored footage in a nice package with a couple of added bonusus to make up for the brevity of the main performance. The band is made up the usual suspects including Nicky Hopkins joining Ian Stewart on keys and the expected combo of Jim Price and Bobby Keys making up the wailing horn section. Beside a few muffed notes and  some humorous slowing clock timing issues, this release gives the 'rock room' exactly what it wants out of the Stones. Ragged and right rock and roll always on the edge and continuously striking hard. 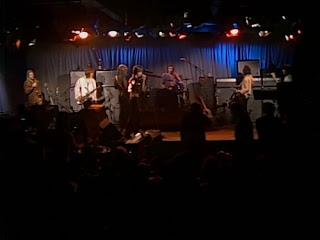 The performance begins with Ian Stewart banging on the black and whites while Jim Price introduces the band over the driving opening riff of ‘Live with Me’. Richards has a couple days of growth on his mug and looks like he is in the midst of a great time. ‘Live with Me’ coagulates as all the members drop into place introducing a thrilling and definative opening song. Highlights include a swinging Bobby Keys solo and a buttery clean tone Keith Richard’s follow up.

The great thing about this release is that it captures the legendary sound and aesthetic of Sticky Fingers  in a live setting. The guitar tones of both Taylor and Richards are chill inspiring during this show. Mick Taylor garnishes every song in tinsel and gold as his SG peels thick slabs of sound sweet as honey and cool as ice. Charlie Watts is the man per usual keeping the train on the tracks and offering structure to the flighty excursions of Richards. Wyman, the sturdy framework also assists Watts in his hog tying of Jagger and Richards numerous flights of fancy.

‘Dead Flower’s leaves mud on the floor after flinging its back country accusations. The feathery arrangement is augmented by Richards joyous harmonizing on the chorus and Taylor’s continuously artistic riffing.  Jagger’s vocals are on point and he does more singing and less shouting which is always a good thing. Jagger sets the groove with hand claps and the band plays a practiced version of the song that obviously developed its deep roots while being performed on the UK tour. 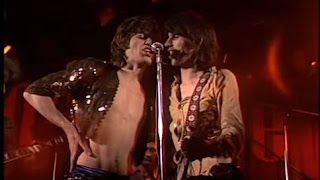 The obvious highlight of the recording is ‘I Got the Blues’ that follows, as Jagger stretches for notes and hits them, and Richards lets himself go submerging his strumming into a jambalaya of familiar blues quotes. Dual horns are moaning and groaning shadowing Jagger’s lament. Richards again sings harmony with Mick offering up inspired and soulful moments of note. Bobby Keys blows heartily on his sax what is an organ solo on the studio recording and is the cause of numerous moments of magic during the performance.

Revealing the band’s obvious affinity for Mr. Chuck Berry, the version of ‘Let It Rock’ that follows requires gloves to touch. Knifing and staccato riffing slices and dices underneath the huffing and puffing horns. Jagger spits out Berry’s lines like an prospective British MC, flaunting his tail feathers as Taylor and Richards stitched licks drive him to greater ass shakin’.'Keef' is firmly in his element here and his solo spots are ace.

Perennial highlight ‘Midnight Rambler’ leaves no room for contemplation of the previous rock display as Jagger sounds the late night harp and the band circles under the stations only street torch. Mick blows some sweet blasts throughout the song but also makes a humorous aside on the footage when he blows a sour note. Otherwise this ten minute version picks up steam nicely and contains significant contributions by everyone involved. Mid song a groovy trading of riffs takes place between Taylor, Jagger and Richards before falling into the central rap where Jagger moans, ‘Go down on me baby’. After some cool on stage interactions, the outro jam detonates just how ya want it to and  becomes a high speed runaway freight.

The Stones in full glory then unfurl into ‘Satisfaction’, a version highlighted by a unique arrangement and the discovery of an alternate vocal delivery and melody by Jagger.  Richards warm island delivery of the once fuzzy and famous lick, as well as Watts laid back banging offer a wonderfully performed and melodically pleasing rendition. Mid way the horns begin to offer their own interjections, nudging the tempo to accelerate and almost morphing the tune into its usual arrangement.  Jagger and the horns soon after enter a call and response that fans the flames and finally get Jagger the love and attention he is so desperately seeking. Very cool and inspired video and audio of an oft played classic. 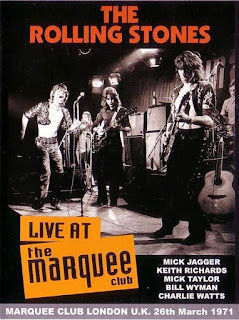 ‘Bitch’ follows after being firmly satisfied and offers a horny Jagger exclaiming what sounds like ‘hot dog’ after some of the heated horn blasts. Richards stays with the muted blanket covering his clean tone that he has played with all night and let’s go with a nice solo spot filled with stabbing percussive licks. An awesome performance and quintessential Stones.‘Brown Sugar’ follows quickly and sweetly acting as a part two to the pair of Sticky Fingers rockers and closes the show fittingly. The song had not yet become the huge track it is today and at this time its single release was still a month away. Richards is enthusiastic as all get out in his playing and you can tell on the video he knows he and Mick have created a great f*@kin’ song and hit it out of the park.

Included as a ‘bonus’ on both the DVD/Blue Ray as well as the CD version are two alternative takes of “Bitch’ and “I’ve Got the Blues’ which each offer their own special moments of note. Bonus video includes a worthwhile performance of the band miming to ‘Brown Sugar’ as well with Mick’s pink suit an element of special interest.

All of the familiar classics and the couple of rarities found on the new Rolling Stones From the Vault release are played with attitude and panache. Having a capture of one of their finest era’s in such quality is sure to be a welcome addition to any collection. Fans that are familiar with the famous performance may not rush to check it, but to finally have it realized in official capacity is worth the investment. The sound and video upgrades are noticeable and the price is reasonable. Dig it.

Brown Sugar TOTP
Posted by talkfromtherockroom at 10:58 AM