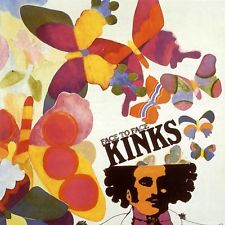 1966 was a revolutionary year for rock and roll. Rock’s early blues and R and B roots were becoming fluid in the creative hands and minds of the musicians who were taking its influence and running. The Beatles, Stones, Beach Boys, Who and other contemporaries were reaching their personal and compositional maturity through revolutionary releases nurtured in the studio. Swept along in this vortex of creativity were the Kinks, who in late 1966 released the LP Face to Face. In this rant, the ‘rock room’ takes a look at the album that initiated the Kinks greatest era, and put them at the same level as the other rockers of the time by releasing arguably one of the finest collections of song . The record Face to Face nestles nicely in the stellar lineup of Revolver, Aftermath and Pet Sounds.

Similarly to their aforementioned contemporaries, the Kinks were leaving the ‘big beat’ and rough hewn garage rock of the time behind and using Ray Davies blossoming compositional sensibilities to develop portraits of distinctly English characters and British livelihoods.  The album pushed the rigid framework of 12 bar blues and distorted rock power chording to the side and entered into a diverse field of sound effects, folk references, music hall reference and melodic experimentation resulting in a 14 song masterpiece that cemented Face to Face as possibly one of the greatest and definitely the most unique collections of sound to come from any group of the era.

The record deftly focuses on Ray Davies against the grain songwriting by becoming the first Kinks record to highlight only original compositions. The record also features Ray Davies personal touches and internalized s, often in opposition to the usual for the time rock expressions of puppy love and bland songwriting. While many earmark the album as one of the first concept records, I assert that this is more a result of Davies consistent vision than any sort preconceived notion of a thematic idea. While there is a thread stitching the tracks together via soundscapes and shared lyrical concepts, the record does not focus on a specific narrative. Regardless, this in no way takes away from the focus of the album, just a comment on its development.

The record opens with the sound of a ringing phone as the Davies brother’s joint composition ‘Party Line’ bobs along on a chunky rockabilly riff not to far remove from the Kinks previous 'beat' recordings. Thematically the track deals with what would now be the equivalent of a ‘phone sex number’. The lyrics also reference Davies commentary on crossing gender lines that would later visited in perhaps the Kinks most famous number ‘Lola’. A quaking opener and attention grabbing number. 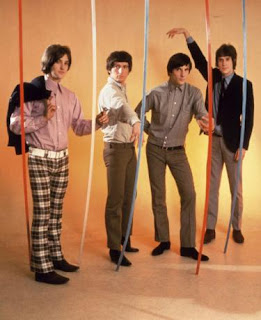 ‘Rosie Wont You Please Come Home’ follows; a shaded blues tinged track begging for the subject’s naive sibling to return back into the protective walls of her home. Davies plaintively begs for his sister to return from the sinister realities of a cruel world. The strength of the song can be found in the beautiful lick that melds the vocal melody with the thick guitar line. The domestic snapshot predates the Beatles own ‘She’s Leaving Home’ by a few months and reflects the current social movement of children leaving their nests to find themselves.

‘Dandy’ is addictive and luminescent acoustic pop and possibly a statement on Ray’s own brother and his ascendant popularity and penchant for the finer things to be found on Carnaby Street.The song is hopeful in its positive jumping arrangement, while its lyrics reveal a simmering jealousy. The 'Dandy' character theme will later be revisited on the LP's first side with "House in the Country'.

‘Too Much On My Mind’ follows and is one of the ‘rock room’s favorite Kinks songs and it is on this track that Nikki Hopkins makes a heavenly appearance on harpsichord. The song slithers along on a sliding bass line by Pete Quaife  and brittle accompanying acoustic guitar. The track slowly contemplates itself as the apprehensive verse patiently becomes sure footed in its self analysis during the chorus. A powerful piece of work by the group with the introspective instrumental backing letting the vocals become the focus.

Hopkins harpsichord then opens ‘Session Man’ which soon develops into a very ‘Who’ –like arrangement with lush guitar strums and pounding Mick Avory skin work. Rumor has it that the song was written about Jimmy Page (could also be Nikki Hopkins) who at the time could be found at pretty much any session around England slinging his guitar around and offering his fingers.

‘Rainy Day in June’ comes next and opens on a dark clap of thunder revealing a heavy and dramatic verse buoyed by phased guitars and piano. The music is representative of rolling thunder, painted by Davies lyrics that use the visual of shadow, eagle and demon to express the menacing felt in the song. Davies voice quivers under a tree seeking shelter from the approaching storm of nature and humanity.The track is a wonderfully powerful and underrated song that concludes in a mantra of hand claps and hypnotizing communal chanting in a musical effort to drive away the encroaching darkness. 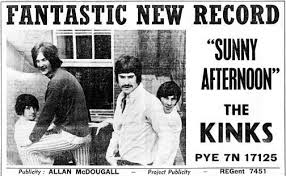 Side one concludes with the rattling roll of ‘House in the Country’ that eschews everything but straight up rock.  Sneered with a punk attitude, Ray Davies comments on the soulless and faceless character who has everything but needs nothing because of his available escape to the hills in his ‘big sports car’. The song syncopates heavily during the chorus and spotlights a very ‘Berry’ like solo by Dave Davies mid-song. On the first side of the record Ray has already created a litany of characters and social statements through this colorful cast as well as using a plethora of musical premises to offer his tales. A gold star to Dave Davies for his sympathetic guitar playing, greatly developed from the earlier 'rave up's' found on previous Kinks recordings. His licks are measured, timely and full of song.

Side two begins with waves crashing and the tribal ‘Bo Diddley’ thump of ‘Holiday in Waikiki’. The verse melody is reminiscent of Chuck Berry’s ‘Memphis Tennessee’ while the content is the wide eyed amazement of a young English boys travels. Of note are Dave Davies hollow slide guitar quotes that lend the track an ethereal vacation quality. Similarly to side one's 'Party Line' a fitting and ear grabbing opener.

‘Most Exclusive Residence For Sale’ is a dryly sung swing about the big man on the block who loses everything and has to liquidate the possession he so closely relates to his identity. The song sways effortlessly, its internal regret contrasting with the sweet metallic guitars and slyly sung vocal lines. Ray Davies tells the tale, but does he really give a shit about the prospect? That’s what makes this one so cool.

‘Fancy’ is the tune where the Kinks walk through the dangling beaded door. The song reveals the first slight tincture of psychedelic and western influence to be found on the LP. The song visits a place where Davies first dipped his toe on the track ‘See My Friends’ from 1965. The arrangement rises and falls like the smooth chest of a lying woman as she breathes on the bed.  The acoustic guitars shimmer as they draw circles around each other, Dave Davies slide work developing the invisible pulse of the song until the hand drums and percussion enter. Ray Davies vocals are stretched over a warm flame elongated as the song organically moves; finally building to a final horny drone that fades the groove into silence.

In contrast ‘Little Miss Queen of Darkness’ elicits a ragtime crooner’s swing and creates the portrait of the sad club girl looking for life and love. The Davies brother’s guitars mesh as thick as blood during the verse that becomes a marching band snare drum interlude. Once again Ray Davies takes everyday scenes and expresses them in such a way that his characters leap out of the grooves in full Technicolor.The Kinks music hall influence would continue to color their albums. 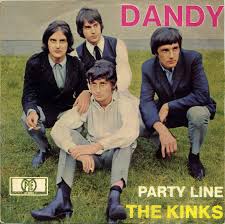 ‘You’re Looking Fine’ is a stony groove based around a thick ‘Batman’ themed central lick. Hopkins piano again dresses the song in confectionery. The sexy groove supports a shouting rock number with no deep philosophical reasoning behind the lyrics except for a commentary on how hot the subject is looking. This in no way knocks the worth of the song, as the LP needs that one shot of lust , but it does act as the first bit of ‘filler’ on the second side.

If you reading this, the next track ‘Sunny Afternoon’ does not require an introduction as the song encapsulates what the Kinks were about during this era, as well as illustrating the best of Ray Davies lyrical approach. The song begins on the recognizable chugging and descending opening lick and Davies opening statement, ‘The taxman has taken all my dough’. In spite of the constant attacks by the government and his lady friend, Davies is still determined to kick back while at the same time inquiring for assistance from someone. The arrangement is the perfect collaboration of music hall balladeering, orchestrated guitar accompaniment and real world subject matter but packaged in easily digestible melodies and unique instrumental accompaniment.A classic.

The record closes with the island riffing and reflection of ‘I’ll Remember You’, a catchy call and response beat song where Ray’s voice and Dave’s guitar serve the main melody back and forth between each other. The track is nicely textured when the Davies join on the chorus quote of the title line in brotherly syncopation. Once again Hopkins contributes hide and seek piano that really makes the moment.  A fitting closer as the guitar line that reappears throughout the song remains in your head as the song concludes, ‘I'll Remember You’ indeed.

The Kinks 1966 release Face to Face, while well known to Kinks fans is often forgotten in the grand view of rock releases in the fertile 1960’s rock scene. The influence of the record can be felt in the band’s contemporaries even in the most subtle ways. The album ushered in a period where Ray Davies was writing some of the greatest music of the era. Musically unique and lyrically groundbreaking Face to Face is an album that reveals its gifts through multiple listens while retaining a relevance and freshness of approach the can be enjoyed today. As always, thanks for reading.

Posted by talkfromtherockroom at 9:08 AM