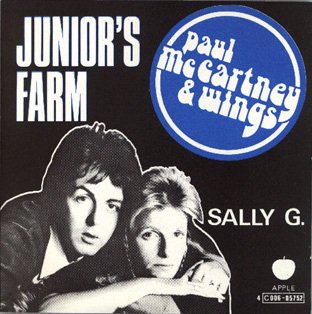 In today's edition of Take One the 'rock room' is enjoying the obscure 1974 'B' side by Paul McCartney and Wings, 'Sally G'. The song is known as the the flip side to the rocking pot farm paean 'Juniors Farm'. 'Sally G' illustrates McCartney's penchant for creating timeless melodies out of countless genres of influence. Country melodies are found patchworked throughout McCartney's musical history, developed in famed tracks like 'Rocky Racoon', 'Two of Us', 'Country Dreamer' and a host of others.

'Sally G' is a shit kicking and muddied boot country lilt recorded when McCartney and Wings glided into Nashville in 1974 for a series of recording sessions. Wings proper is supplemented by Nashville hot shot session men Lloyd Green, Bob Willis and Johnny Gimble Willis contributing on steel guitar, dobro and fiddle respectively while also adding to the legitimacy of Macca's country excursions. The resulting 'B' side which was also McCartney's last Apple single release ended up making an appearance in the country charts as well as a high spot with 'Junior's Farm' on the Billboard charts.

The song's inspiration hails from McCartney's late night visit to 'Painter's Alley', a famed Music City location of note where he took in a host of musical performances by the local talent. 'Sally G' is an alias for any number of the magic Nashville ladies he probably saw that evening. Lyrically the song stays close to the classic country music themes of regret, longing andlosing placed against the setting of a Southern bar room. McCartney deftly collaborates the aforementioned themes into a typically catchy McCartney melody and a middle eight that ties the elements together in your head for the remainder the day. 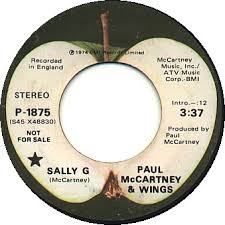 The classic country influence sparkles under McCartney's British wit tinkering. The track opens on the the breezy swell of steel guitar and fiddle that introduces the gently undulating prairie jaunt. The rhythm is a nod of the cap to the Tennessee Three clip-clopping along while McCartney sweetly croons the verses. The chorus features Linda and Denny Laine joining with Paul and stirring up the signature Wings vocal blend. 'Sally G's' last initial is accentuated with a hayseed falsetto hiccup that cheerfully contributes to the originality of the song.

The tune then rolls into the middle eight where McCartney's melodic prowess takes shape with a flowy 'Beatle-esque,' for lack of a better term, melodic quote that halves the beat while leaving Paul's fingerprint visible in the barn door's wet paint. The change beautifully contrasts the honkyness of the verses. The song returns for a reprise of the verses and concludes as a successful and succulent country honk pop song.

Similarly to his to his excursions into vaudeville, hard rock, funk, electronic and world themes, Paul McCartney's composing abilities always felt like a home cooked meal when bare booting into the warm Southern reaches of influence found in the country music of the United States. In addition, McCartney's early exposures to Country music's greats that were transmitted to his family radio in Liverpool not only sank into his flesh, but also influenced the rock and roll artists McCartney would come to idolize. The early acknowledgement of talent and recognition of influence not only combined to create one of the most unique songwriters of all time, but also some of his most original musical expressions. 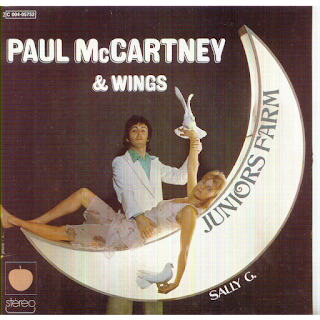 Paul McCartney and Wings 1974 single release 'Sally G' was only available for years as the flip on the original 7' vinyl record. That changed with its inclusion as a bonus track on the 1993 compact disc release of Wings at the Speed of Sound and more recently on the 2014 Venus and Mars remaster. As is often the case with prolific artists such as McCartney, (Dylan) some of their best music is inexplicably left off of their mainstream official releases completely or left to languish on the 'B' side of a single that will eventually go out of print. Such is the case with 'Sally G', a lost tune with a limited exposure but brimming with addictive and quintessential McCartney elements. Go dig this one out of the collection, or take a seat in the 'rock room' for a spell to enjoy a deep cut from the McCartney archives.

Posted by talkfromtherockroom at 3:07 PM No comments: