Tools of the Trade: Eric Clapton’s 1964 Gibson SG ‘The Fool’ Guitar - 'So Many Fantastic Colors' 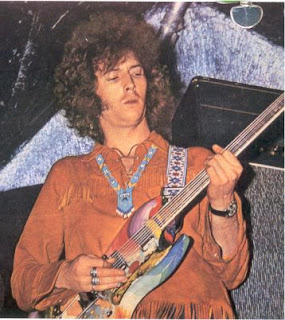 While Eric Clapton’s signature guitars and most recognizable instruments are usually thought of as‘Brownie’ or ‘Blackie’ his trusty classic Fender Stratocasters; for an 18 month period from 1966-1968 Clapton disseminated his psychedelic stringed magic through a 1964 Gibson SG.  Referred to as the 'Fool' guitar, today the 'rock room' takes a look at this 'tool of the trade'. Famously painted with a tastefully trippy art moral representing the battles of good and evil and the power of musical magic, Clapton’s most revolutionary period as a guitar master is hallmarked by this iconic guitar.

This particular instrument was the primary guitar responsible for the development of Clapton’s ‘woman tone’ and for the creation of the formative foundation riffs of ‘Cream’ and their improvisational catalog of songs. Clapton described the aforementioned 'woman tone' as a careful manipulation of distortion and feedback in order to make the guitar communicate like a human voice. A careful listen to any number of songs in the Cream catalog will illustrate this point. Later in this tale I have included a clip of Clapton showing how he developed this approach.

Clapton first started to use the 1964 Gibson SG in 1966 after his 59’ Les Paul referred to as 'Brownie' (used in the Bluesbreakers)was stolen. There is no confirmation where Clapton got the SG guitar from, though many say it was a gift from George Harrison who’s other primary SG guitar later ended up in the hands of Badfinger’s Pete Ham.

Prior to Cream embarking on their 1967 US tour, Clapton along with Jack Bruce and Ginger Baker all had their instruments redecorated by Dutch artists ‘The Fool’, Simon and Marjike. These artists would later paint the glorious store front of The Beatles Apple boutique in downtown London. As was typical for the era, Clapton’s guitar was painted in a day-go and especially spacey way, with a cosmic cherub levitating above the scorching flames of hell. Suspended amongst starts the heavenly figure rings a silver triangle, a clarion call amidst the madness. A small red sunned alien landscape resides in the corner of the guitar under the pickups representing paradise. Waves of color reverberate away from the body lapping away like echoed sound in a musical canyon. The waves continue to back of the guitar where they pool together. 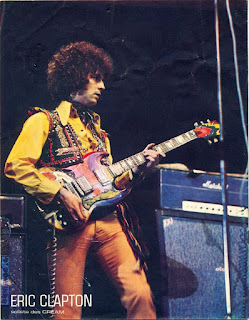 The seven pound solid body guitar features four primary controls two volume controls for each pick up respectively and two tone controls. The pickups area pair of Gibson humbuckers responsible for the hearty and famous mid range bite of the guitar.  These aforementioned pickups working in conjunction with a full stack Marshall amp are the elements of the quintessential mid 1960’s psychedelic music aesthetic.Clapton mastered this approach.

When Clapton first began playing the 22 fret SG, it had the original Deluxe Vibrolo installed, shortly after though, this setup was changed to a standard bridge and stop tailpiece. He also replaced the original tuning pegs from the standard Klusons to Grover pegs. A priceless view of the guitar in Clapton’s able hands can be found here where Eric illustrates a few ways of drawing incredible and diverse tones from the instrument.

Clapton played the shit out of the guitar for the time of its use. The paint started to bubble and  peeland the neck became a sponge full of Clapton’s sweat and marked with his psychedelic finger prints. For a short time the instrument acted as a wicked messenger and was strangled for its sound. But eventually Clapton had wrung the wood dry. Clapton rid the guitar hard and put it away wet and by the end of 1968 the guitar disappeared along with Cream as a band.

Clapton either gave the guitar to Jackie Lomax after working on his 1968 Apple solo recording, or back to George Harrison and then on to Lomax depending on what story you read. Regardless, Clapton had moved on. The guitar eventually made it into the hands of Todd Rundgren who played it for many years until it hit the auction block in 2001. Rundgren noted that when he received the guitar it had been well loved and that Clapton had worn the finish clear off of the mahogany neck and that the wood felt as if it was falling apart! Throw on any live Cream from 1967 or 68 and you will be left with no doubt as of how the guitar reached this state! 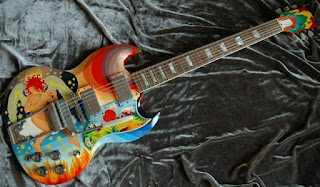 The playing Clapton displays from this era melts as wax falling from a tables edge. Clapton’s approach ranges from his subtle ‘woman tone’ to full out screaming distortion that swoops and soars as a bird of prey hungered for its next meal. Clapton’s trusty ‘Cry Baby’ tone was birthed here as well as his licks trace tears down listeners cheeks with gurgling syrupy lines. The 1964 SG channeled Clapton’s experimentation and tracked his growth as a player while he dipped his blues roots into multiple pools of influence.

Eric Clapton’s 1964 Gibson SG while only a small detail in the landscape of Clapton’s remarkable career, is a very important one at that. The guitar signifies an era where Clapton and the Cream’s horizons were endless and Clapton was further revolutionizing six strings at a furious rate.  The guitar’s design and decoration not only represent the sound created by the guitar, but immortalize an entire era of creation and development. The instrument acts as and has become a collaborative for aural and visual mediums of art and is a famed representation of both.

Cream Farewell Concert
Posted by talkfromtherockroom at 10:10 AM No comments: