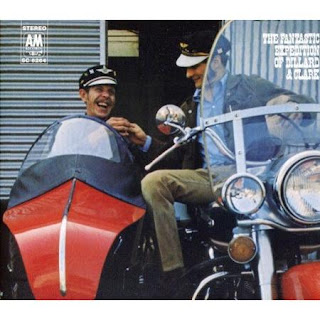 The focus of today's rock room rant is a collection of music born from casual jam sessions and good times amongst friends and legendary musicians. The October 1968 LP The Fantastic Expedition of Dillard and Clark, while labeled as a early proponent of the developing 'country rock' sound to emanate from the late 1960's, which it is; should also be identified by its special mixture of prime Gene Clark songwriting with a host of well known musicians steeped in bluegrass and country music. While 'rock' has always been a conglomerate of influences, in the mid 1960's it was under going a constant metamorphosis, melodically, lyrically and aesthetically. Rock and roll's best and most talented artists helped to develop a genre that would be in constant flux and subject to deep experimentation. These experiments in sound and vision not only distorted and redesigned rock and rolls fundamental elements but also initiated a rediscovery of the sturdy support beams of rhythm and blues music.

Bands like the Beatles, Byrds and Band took a glimpse into the rear view for inspiration when their own fresh well of ideas needed to be refreshed. While pundits discuss and dissect when 'country rock' really took hold, the roots of the genre can be traced to a number of important destinations. The Beatles 'I've Just Seen a Face' and The Byrds 'Time Between' are two songs that are often mentioned as early examples of 'Country Rock'. One important element to remember is that a number of the legendary 'rockers' to emanate from the creative stew of the 1960's rock scene had cut their teeth on early country and roots music music. John Sebastian, Chris Hillman, Gram Parsons, Levon Helm, Jerry Garcia and David Crosby to name only a few had deeps roots into the back woods of Americana prior to their rock and roll ascensions.

Gene Clark's 'Byrds' were the leader in this rediscovery and assimilation of country and bluegrass with rock. Aforementioned Byrds player Chris Hillman, who would play an integral part on the Fantastic Expedition of Dillard and Clark album was an amazing and well known bluegrass musician and mandolin player prior to his picking up a rock and roll bass. McGuinn, Hillman and recent Byrds addition Gram Parsons would record the Sweetheart of the Rodeo album in 1967 which is basically a contemporary country album recorded by 'rock' musicians.

The Fantastic Expedition of Dillard and Clark was recorded in late 1968 and pulled from the influences surrounding it while expressing from its rustic grooves a stony homegrown blend of Gene Clark's innovative songwriting, country, rock, bluegrass and back porch bleary eyed serenading.Typical of Gene Clark's career the work received critical acclaim from musicians and writers while mainstream acceptance avoided Doug Dillard and himself until posthumous re-discovery of their work. The album is summed up by its cover, two smiling pals sharing a motorcycle while passing 'something' between their fingers. So, the 'fantastic expedition' begins.

The album is a 'who's who of 'country rockers' with contributions from future 'Flying Burrito Brothers' and Eagles' member Bernie Leadon, Chris Hillman, Byron Berline, Donna Washburn, Pete Kleinow, David Jackson, Michael Clarke and of course cohort Doug Dillard. As previously mentioned, the joy that comes from the collaborations is the essential element in what makes the music so wonderful. 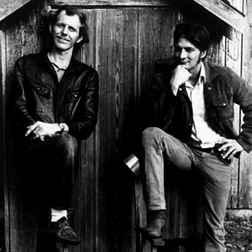 Only the opening track of the album has the true aroma of rock. The Clark penned 'Out on the Side' begins with a fluttering organ drone and thumping bayou drums. Clark's vocals enter velvety and rich the focus of the track as the fuzzy edged backing looks in from a steamy winter window. The big collaborative chorus features Leadon and Dillard joining Clark in a smoky singalong. The track continues with the only true reference to Clark's Byrds remnants, a silver picked electric guitar that drizzles the perfect dressing to the song. 'Out on the Side' sits slightly separate from the rest of the LP due to its more 'rock' instrumentation, but acts as the perfect opener, contemplative like The Band's 'Tears of Rage' opener on Music From Big Pink released only a few months prior. Shady Clark melody


The woody personality of the album starts to reveal itself with the following Clark/Leadon song 'She Darked the Sun'. 'Sun' has a drumless swing that trickles in with a diffused sparkling banjo and soon becomes a swell of mandolin and Byron Berline fiddle that easily meld into a stunning simpatico. The lyrics express the classic country narrative of the abuses of an 'evil' woman. Clark's syrup smooth vibrato supports the high and lonesome harmonies of the chorus while Berline's mournful fiddle acts as the melodic cement.

'Don't Come Rollin' begins with a solitary train station harp the calls home another drumless groove that invites the listener a shit kicking invite to come cruise the hills, but with a stern musical warning. An addictive rolling rhythm encapsulates the 'seat of the pants' fresh back porch jamming that permeates the record. A bounding collaboration for Leadon, Clark and Dillard 'Don't Come Rollin' is a highlight of side one.

The famed slow saunter of 'Train Leaves Here This Morning' could quite possibly be Clark's finest vocals committed to tape in addition to being one of his most beloved songs. (Also later taken for a spin by Bernie Leadon who co-wrote it) This is a landmark recording. The gently undulating groove elicits the weary traveler with bag slung low walking toward the pin pricked night horizon. Clark's hearty throat draws out the emotion of the song like infection from a wound, with the narrator's indecisiveness tangible. The song takes it time to the station while the smoky ambiance and Clark's blatantly earnest vocals ascent the recording to the next level. The centerpiece of the record and a must hear track per the 'rock room'.


Flipping the record, side two begins on the galloping horseback of 'With Care from Someone'. Another co-write with Leadon, Clark and Dillard all contributing to the dramatic soundscape. The melody has the same emotional effect as a traditional folk ballad or salty sea chantey. Dillard's rolling clear water banjo is the driving current for the track, with Clark lending a moaning harp line to the pulsing theatrical melody. A wonderful mid-song instrumental break is highlighted by a sneaky and muted low profile Bernie Leadon guitar line. Choice opener to kick off side two. Highlight.

Next, 'Radio Song' follows playing like a sleepy highway meditation, white lines streaking by, churning miles and flipping radio dials. The woody bass sets the woozy rhythm for Clark's twilight statement of reflection and regret. Big 'Byrds' vocals adorn the chorus, but the unique aspect of the song is the antique music box keyboard blending with the soft acoustic trilling. Beautiful combination of words and music artfully creating a scene. 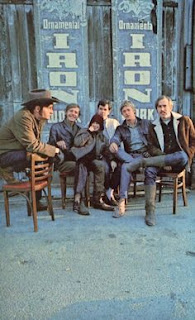 'Git On Brother' is the quintessential bluegrass cover. Played high speed like a party with collaborative vocals and chug a lug acoustic strumming. The group takes the Lester Flatt song around the bend while passing the burning ember of a joint below the line of sight. A well chosen song and tip of the hat to the influences contained on the recording.

'In the Plan' comes next and features fiddle, banjo, acoustic guitars and thumping bass interweaving on a creative loom of sound. Gene takes a sweet mid-song harp solo in this uptempo and driving track. Lyrically the song highlights Clark's penchant for deceivingly simple descriptions of human and life interactions but with slightly surreal twists. Here he asks the eternal question of existence in an unexpected musical package.

A personal favorite of the 'rock room' and the closing track of the LP, 'Something's Wrong' is stamped with the stellar perfection of an undeniable Gene Clark melody. The song opens with a crisp acoustically decorated descending introduction that is beautifully adorned with a slight sadness that is carried throughout the song. Similarly to the rest of the LP, there is a thread of longing for moments past as well as a fleeting regret contained in the lyrics. Clark's songwriting was always special for its delicate balance of hopefulness while still retaining a certain anxiety. 'Something's Wrong' encapsulates this ideal as Clark remembers images of being a boy with the acute ability to sense a prospective danger. Instrumentally, dolent violin pours itself over gently waltzing acoustic guitars. The combination results in a faded aural intoxication.

While Dillard and Clark would record one more album together with 1969's Through the Morning, Through the Night, the restlessly creative duo both besot with demons would continue to explore various creative outlets, just not together. The Fantastic Expedition of Dillard and Clark was the perfect album at the perfect time for these kindred musical spirits. The joyful collaboration was thankfully captured so that the two heady country honks and their best musical pals exploits could be immortalized forever.The duo's 1968 album has had a long reach due to its guests, influences and cross pollination of talents and abilities. Dillard's swaying bluegrass and Clark's folk rock sensibilities puzzle pieced into a generation of musicians searching for genre smashing ideas to combine with their own expanding horizons. The Fantastic Expedition of Dillard and Clark album is a vital frame when developing the musical development of rock and country in the 1960's and is a 'must hear' for fans of the era or of the Byrds, Flying Burrito Brothers, Poco, and Eagles.

The Fantastic Expedition of Dillard and Clark
Posted by talkfromtherockroom at 11:47 AM