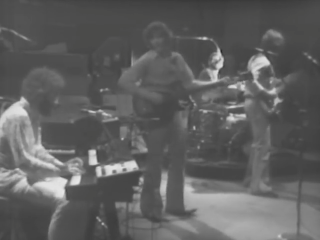 Flickering in the ‘rock room’ today is a fantastic A/V document of the ‘Band’ in their original configuration and on their final tour in the summer/fall of 1976. Taking place four months before the famed Last Waltz this pro shot black and white film offers a detailed look at the Band while spotlighting a solid performance by only the group with no additional horn section.  The filmed document is one of many to emanate from the expansive vaults of Bill Graham and is available for streaming by the executors of his musical estate ‘Wolfgang’s Vault’. There are multiple cameras shooting for this July 20, 1976 concert at Casino Arena in Ashbury Park, NewJersey. The resulting film (believed to be for a CCTV broadcast) is a softly muted and kindly aged, but more than acceptable filmed look at the group with a good sounding accompanying soundboard soundtrack.

Thankfully there are a number of recorded documents to hail from the Band’s final year in existence, such as the famed King Biscuit broadcast at the Carter Baron Amphitheater on July 17, 1976, the Lenox Inn show from August and the awesome performance from the Palladium on September 18 with the horns and Paul Butterfield. This Casino Arena show is the perfect visual addition to these aforementioned concerts and features the same sort of musical fire. While the Band were never about being improvisational beasts, their concerts featured crisply played and song oriented performances most effective in more intimate environments. Admittedly there were ups and downs on the tour,  some evident in this video, but those are the realities of rock on the road.

The front row seat in the time machine begins with the funky stomp of ‘Don’t Do It’ the typical but welcome opener for the Band during this era. There is a well balanced mix and the ‘non professional’ footage lends equal time to each principal of the group unlike The Last Waltz film. The cross stage shot that encompasses all 5 members of the group is stunning and offers a rare look at the group in action from this era.

‘The Shape I’m In’ keeps the early part of the show percolating but shines an unintentional spotlight on Richard Manuel’s roughed up vocal issues. The tour had brutalized Manuel’s throat and his recreational choices of the time didn’t help matters. Regardless, the opening one two punch is a classic capture.

Rick Danko’s vocal spotlight follows for a pastoral and dramatic ‘It Makes No Difference’, one of Robbie Robertson’s finest compositions. Each rendition of this song seems to top the previous and here Robertson coaxes charged staccato licks that respond to Garth Hudson’s sweetly swelling soprano saxophone statements.  The cross stage camera shot encompassing Danko, Robertson and Helm is worth the price of admission! Danko’s investment and ownership of the Northern Lights, Southern Cross number is never in doubt with this early concert highlight.

‘The Weight’ follows to great response from the crowd and is ushered in by Robertson’s high-strung  1958 Stratocaster acrobatics; A typically great rendition of the oft-played classic highlighted by  Ricky Danko’s  joyously flapping ‘duck arms’. 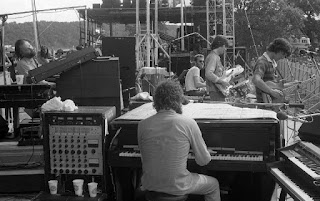 ‘King Harvest’ comes next and the Danko/Helm rhythm section illustrates a bank vault tight togetherness. Manuel digs deep for his vocal attack and the group responds in kind. The group is beginning to heat up and the following series of songs illustrates that point.

The gentle dusk of ‘Twilight’ a highlight of many of the 1976 concerts comes next. According to Robbie Robertson’s biography Danko threw out some convincing words around in order to make sure he got the lead vocal duties for this deep cut Robertson composition.  Actually released as a single, the track later appeared on a ‘best of’ Band compilation and remains one of the most enduring and poignant Band cuts. In concert the song emits a gentle and smoky reggae lilt, earlier versions including Robertson’s piano demo capture deeper underlying emotions. The rendition here is a wonderful performance of one of Robertson’s finest compositions, with all band members contributing admirably.

Two new songs alternate with two introductory songs from Music from Big Pink making for a well played central core of the concert. ‘Ophelia’ starts things off with ‘hot to the touch’ guitar and a swirling calliope of keyboards creating a joyous undercurrent played by maestro Garth Hudson. Levon sings the shit out of it while appearing in all of his ‘Last Waltz’ glory and it just feels good. This track signals to me the moment when the show really begins to take off.

‘Tears of Rage’ comes next its poignancy is increased by Manuel’s struggle to hit his vocal reaches and the contemplative swing of the group. Robertson smirks embarrassingly as Manuel pushes through the first verse, is  by the second set of words Richard has found his path and sings an emotive version of the quintessential Band song. Like a classic car stated on a cold Catskill morning Manuel’s voice takes a while to warm up and while not as youthful as it once was still retains a moving timbre.

A brand new number for the time, ‘Forbidden Fruit’ comes next and is a not so indirect comment on the state of some of the principal members of the group. Constructed around Robertson’s guttural string bends and tremolo bar flexing the song moves like liquid and is one of the Band’s best late era compositions. The obvious strength of the Band is still tangible even in the ‘Twilight’ of their career, the unfortunate issues with addiction and in fighting suppressed by their pure on stage talent and abilities. Kudos to Hudson and Robertson who are both stunning in their coloring in the lines of the song and whom are unafraid to pluck the low hanging fruit from its musical branches. At this point in the video there are some issues with sound and the visuals, nothing too horrible.... but stick through it as it will soon improve. 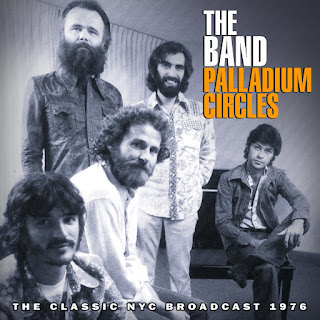 Garth Hudson’s nightly ritual follows as he tosses out pages ripped from the encyclopedia of music history, casually spun in cosmic yarns from his keyboard arsenal. Any footage of ‘honey boy’ is more than welcome in the ‘rock room’. The man is beyond musical discussion, his multiple talents must me individually digested and contemplated to be fully understand and enjoyed.  The ‘sonic wizard’ of the Band spotlighted, ‘Chest Fever’ follows Hudson’s ‘Genetic Method’ in a high octane version and proceeds to give everyone in the venue flush faces.

The downhill slope approached, ‘Stage Fright’, ‘Cripple Creek’, and ‘W.S. Walcott Medicine Show’ conclude the concert in a spectacular trinity. The footage makes me giddy, and for any fan of the Band it will do the same as its existence is a stunning development! Collaborative vocals and general good vibe permeates the proceedings. Danko is particularly spunky and a highlight of the camera frame. Levon’s sing and drum dance is inspired and culminates with the sonic acrobatics of ‘W.S. Wolcott’.The group leaves the stage to a wonderful ovation.

The encore follows and is a funky and hornless ‘Life Is a Carnival’, lending a powerful and fun conclusion to the show. Helm is animated and feeling it as he and Danko lock and key the distinctive drum/bass groove. Robertson is electric and directs the song with his guitar neck until it skids to a well earned conclusion. A couple of quick waves and a Levon Helm grin and the circulating video concludes. An hour and twenty minutes that flies by but is obviously well spent.

1976 was the final year of the Band’s existence, in a way brought on by increasingly erratic performances and a general struggle to regain the camaraderie of years past.  There were still moments of greatness and joy to be found in the creation of their music but the end was near. This Casino Arena show finds the group in the middle of the madness, but moving forward as a ‘band of brothers’. It is a welcome addition to the story of the group located in a period only documented by The Last Waltz film. This review is not a forum for a discussion of The Last Waltz, but what cannot be denied is that this ‘unofficial’ document is a more all encompassing view of the Band minus the guests. Dig in.
Posted by talkfromtherockroom at 10:23 AM