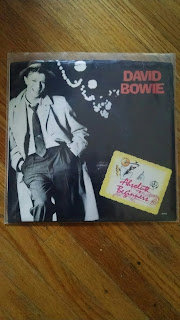 Spinning today in the ‘rock room’ is a 7” jewel composed by David Bowie, recorded and released in March of 1986. ‘Absolute Beginners’ was the theme song to the Julien Temple directed film of the same name to which Bowie agreed to compose he title track. The song was a commercial success for Bowie reaching number 2 in the UK, but not doing as well in the US where the corresponding film was also released without notice. The version of the single playing in the ‘rock room’ today features the 5:35 edit version on the ‘A’ side and the (Dub Mix) instrumental edit on the B’ Side.  There exists a full 8:03 version with corresponding music video and percussion breakdown which is linked here for your enjoyment and I wil use as the basis of this rock rant.

The single was released in between Bowie’s 1984 LP Tonight and 1987’s Never Let Me Down. His criminally underrated 80’s output is thankfully represented by this celebratory and memorable track. The era in which this song was released was the period of big over the top saccharine and often forgettable rock ballads. Typical of Bowie, ‘Absolute Beginners’ was perfectly contemporary while also remaining completely original all the while tipping its aural chapeau to past times.

The production values of the 1980’s were not always kind to Bowie and his fellow sonic craftsman, yet with ‘Absolute Beginners’ as proof, Bowie could deftly draw out the best and most useful elements of any tools and aesthetics available to him while colliding them with his own creative ideals.

Oddly enough, ‘Absolute Beginners’ adheres the current values of its creation but also reflects back to the black and white memories of Temple’s 1950’s based film. The video depicts ‘Dick Tracy’, Bowie walking the classic darkened streets of post-war Britain. The melody of the song is shifty, questioning apprehensively while stating emphatically. The song elicits the freshness of a new love for old lovers.

While a youthful expressiveness is tangible throughout, Bowie traces the hopefulness in a lacy regret and touch of the grandiose when comparing the current love to the expressiveness of the arts. 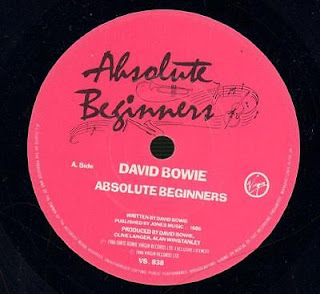 The full version of the single opens with a stringy ethnic guitar groove supported by steady and sonically enhances drums.This sneaky introduction only appears once in the song yet sets an intriguing premise. Somewhat detached from the rest of the body of the track the lick ushers in the major framework of the song. The edited version does not have this critical prelude.

Tribal and sensual women dance in and out of frame as the intro dissipates and the central melody catches. Substantial and chorused, ‘Bop, bop badoo’ vocals explode and blur the line between the early choral groups Bowie admired and this modern re imagining by Bowie.

This vocal spot will remain the touch stone for the song’s duration as the chorus continuously finds a soft landing in its groovy midst's. The vocal axis keeps the film noir theme in the frame while coloring with current brushes. The song races ahead in D major with shimmering acoustic guitars and ringing synthesized dressings. Bowie’s lyrics are sweetly crooned, pulling back against the churning backing track. His vocals are gentle and plaintive, yet with underling seriousness.  Carla Bruni joins and duets with Bowie on the second set of verses lending a deeper emotional sharing to the cinematic quality of the track, while becoming a discussion between both principal ‘beginners.’ Buoyant swells of special guest Rick Wakeman’s piano are drizzled over each Bowie verse line. A spindrift of the piano conjoined with tasteful and wistful synth strokes dress the respective verses in a misty anticipation.

The procrastinated glory of the chorus is finally reached after over two minutes where it opens and reveals Bowie adorned in some of his most stunning vocals, ‘If our love song, could fly over mountains, could laugh at the ocean, just like the films. There's no reason to feel all the hard times, to lay down the hard lines it's absolutely true’. The restraint of the constructed verses is released for the chorus, the anticipation removed while Bowie levitates. The meter of the lines, the depth of Bowie’s voice and the soaring instrumentation is stirring. The collaboration of melodic signposts equate to a stunning emotional experience.
The second set of verses follows and the return to the ‘Bop’ vocals comes with a horny saxophone punctuation. When the the second rendition of the chorus is revisited, the chorus melody continues on wordlessly from the chorus refrain as this time the saxophone appears in golden reflection and echoes the powerful melody with multiple variations on the theme. The song increases its elevation as each ring around the chord changes tightens until finally dropping out and allowing for a percussion breakdown and respite from the magically spun melody lines. As has been the case for the song, there is a restrained power that threatens to reveal itself to the listener but never quite does. Hence the strength of the song, just as you are prepared for release the swirling collusion of licks and lines pulls you back into the swell. 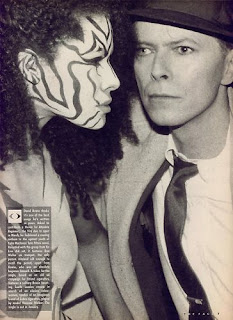 The rattling percussion breakdown spits us back into the ‘Bop bop badoo’ choral reminding us of where we came from. A complete immersion in this song is reflected here and by the content of the lyrics. The simplicity of a smile, the confidence to tell the rest to ‘go to hell and the resulting seed of doubts from the decisions made are blown away by the grandeur of the music. The collaboration of verse and sound keeps the emotional content fresh. The reason this track deserves a full attentiveness is that it remains a simple pop song but with deeper motives and underlying importance.

Bowie would continue to perform this song on his 1987, 2000 and 2002 tours. His excellent bass player Gail Ann Dorsey would join him for the joint vocals in what would result as memorable live versions on the 2002 tour. The available version performed in 2000 for the BBC, in the ‘rock room’sopinion is the definitive live version. Special note should be taken in regards to Bowie piano player Mike Garson who is stellar in his performance on the black and whites.

While not full of secret meanings,  guitar fireworks or ‘experimental’ sonic and voice, Bowie’s 1986 single ‘Absolute Beginners’ holds unique place in the Bowie catalog due to its unabashed emotion, stunning vocals  and cinematic qualities. The track retains at its core an explainable alchemy, which in the end, could be said for any of the compositions in the expansive Bowie canon.
Posted by talkfromtherockroom at 9:41 AM