The Grateful Dead - Dave's Picks Volume One -May 25, 1977- Trembled and Exploded 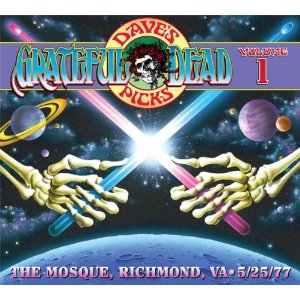 Playing in the ‘rock room’ today is the first in the series of live archival Grateful Dead concerts released under the moniker of Dave’s Picks. Named after David Lemieux, the keeper of the Grateful Dead’s musical vault, this collection concentrates on high quality shows representing peak Dead and is the follow up to the popular and original 36-volume Dick’s Picks live concert collection; brainchild of original keeper of the vault Dick Latvala. In between these aforementioned collections came the short-lived Road Trips series which offered varied concert highlights of underrepresented periods in the group’s long history.
Fans never really latched on to the piecemeal Road Trips, which for the most part offered musical selections as opposed to full concert recordings. Dave’s Picks subscribesto the vision of original and famed Grateful Dead archivist Dick Latvala, who initiated the idea of releasing the most transcendent Grateful Dead performances to the public — regardless of some minor sonic anomalies that may have previously prevented their release to the general public. These collections were originally available to order through the mail and currently can be accessed through the Grateful Dead’s official website.
The subject of today’s ‘rock room’ rant, Volume 1 of the Dave’s Picks series was given an auspicious introduction, starting at the end of one of the Grateful Dead’s most popular tours hailing from May of 1977. That legendary month, containing some of the band’s finest musical moments, has now been mined for a box set, an official release and three Dick’s Picks. The premiere edition of Dave’s Picks pulls from this spring 1977 tour a performance that in some ways equals or surpasses any of the previously released and aforementioned shows.
Dave’s Picks, Volume One brings us back to May 25, 1977 in Richmond Virginia at the ornate musical venue, the Mosque. Two shows would remain until the conclusion of the storied Spring ’77 tour and this concert finds the Grateful Dead playing at a consistently levitated level. The group is listening intently to one another, playing variable and extended set lists — and developing the songs that would become important jam vehicles and cornerstones of their catalog for years to come.
The concert’s first set is a typical of 1977’s extended performances, which is to say it is brimming with power and grace. The Grateful Dead, by this time in their history, had learned to harness their explosiveness. No longer playing the extended five-hour concerts of the past, they could now sustain a steady level of intensity for an entire evening. Witness how every song of the first set is a perfectly sculpted piece worthy of individual inspection. 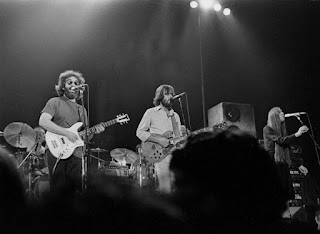 Opening with the pairing of 'Mississippi Half Step' and 'Jack Straw,' it’s obvious that the Grateful Dead mean business from the get go. The pairing together two usual openers into one package, “Mississippi” and “Jack Straw,” show an aggressive eagerness by the band. By this point in the tour, the songs have been cracked open enough to reveal a multitude of sunny musical horizons — and the same holds true here with substantial versions being disseminated.
A favorite major highlight of this opening set of music includes a usually poignant 'Peggy-o,' which in 1977-78 reached a place of refinement and dignity that the group would find hard to surpass in future years. The same applies for a well-jammed 'Cassidy,' and a charged version of “Lazy Lightning/Supplication” that masquerade as a set closer,  but in typical 1977 fashion is followed by more music represented by devastating versions of 'Brown Eyed Women' and 'Promised Land.'
The real wizardry occurs in second set, when the band opens with the 14th version of the 'Scarlet/Fire' pairing of the tour, and arguably the best. While there is a reasonable argument for a number of previous versions containing the same alchemy as this particular one, notably the obvious choice among Deadheads of May 8, 1977, this particular rendition from the 25th contains a forward-moving assertiveness that forsakes dreaminess and drift for a swirling current of percolating sonic foam. Phil Lesh and the drummers are particularly spunky, grumbling under Jerry Garcia’s phased string explorations that eventually result in an orchestrated and seamless transition into 'Fire on the Mountain.' The Grateful Dead is as 'on' as they have been for the tour and they know it. 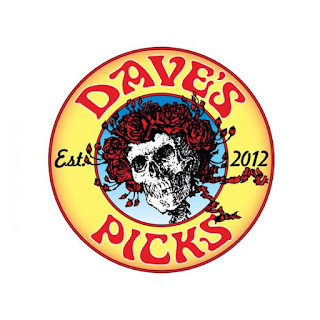 Garcia freaks out on his fret board for 'Fire,' playing hot potato with multiple melodic constructions, while the drummer’s willfully enthusiastic exclamations are the impetus for much of the excitable jamming. The hallmark of this performance for me is the melodic sensibility and original creativity by all of the players, in addition to the aggressive and musical drumming for this show. Obviously these elements combine equating to a top performance in a respected era by the entire group.
Following a compact 'Estimated Prophet,' a notable extended take on a stretched out 'He’s Gone' appears and then morphs into a stout blues groove. The swamp-stepping jam that follows illustrates the contagious tendency for exploration exhibited by the Dead on this evening. The band slowly crest a hill and then fade into an imposing double drum breakdown that explodes in a series of percussive bombs. Out of the remnants of these war drums comes in the ‘rock room’s humble opinion the finest 'Other One' of the tour.


Garcia is again, conjuring a wealth of melodic ideas, blowing his psychedelic horn and constructing the song into a series of dramatic swells that elicit a cosmic response from the entire group. Following the first verse the drummers keep the jam bobbing for life, never letting it disappear under the surface of the musical swells. This following musical excursion features some of the finest group jamming you can uncover in the month of May 77. Organic and tangible musical creation is on display as the group weaves there way through a plethora of musical expressions.

Unique here, is that the version of the 'Other One' is split, straddling a typically cinematic 1977 version of “Wharf Rat.” The Grateful Dead plays this one like its the final one, and in the context of the show feels just exactly perfect. After completing regal and proud reading of 'Wharf Rat,' the group returns to sing verse two of 'Other One' completing the version, but not finishing the tale. A perfectly placed 'Wheel' rolls in from the road, bringing with it a cool breeze after the preceding half hour of heavy musical exploration.
Seizing the moment to take it home and satisfied with the evening’s discoveries, the Dead blast through the Chuck Berry songbook with a heavy and extended double time 'Around and Around,' just like they used to build ’em. Following this is a rip snortin’ encore of 'Johnny B Goode.' played with a duck walkin’ fervor that closes the evening definitively.
When the Grateful Dead play at their best, it feels trite to try to express the madness in words. Dave’s Picks, Volume One comes from what many feel to be the band’s finest era, so its addition to the canon is not a surprise. What may be a surprise is how such musical quality and continued improvisational searching could be accessed on a nightly basis.


This recording contains one of these evenings, filled with numerous unique and delightful passages now forever immortalized. Unfortunately limited to 12,000 copies, this release is now in the hands of flippers and gougers — but its contents can still be found for those willing to search.