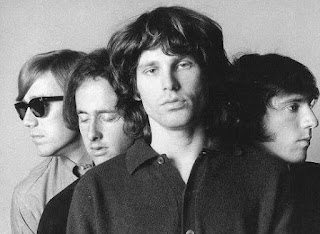 Flickering in the ‘rock room’ today is the 2014 video collection R-Evolution featuring the Doors, always a band delicately balanced on the cutting edge, the DVD immortalizes the band as they made forays into the media of film, while highlighting their influential contribution to early music videos. On lazy Sunday afternoons it’s always amusing to thumb through the ‘rock room’ archive of music video and documentary and pick something random out to have a showing. Admittedly this collection was purchased and then waited patiently for a proper ‘Now Playing’. Too much music in the line up is never an issue, it also offers new music surprises on days like today.

It’s well known that Ray Manzarek and Jim Morrison of the Doors both attended UCLA film school, and because of this early and unique relationship with movies, both men had a special awareness of the alluring qualities of film. Looking at this awareness in conjunction with their flowering musical and artistic abilities illustrates how the Doors were able to successfully and originally blend music, poetry and film into an singular artistic display.

Manzarek referred to the Doors music as “aural cinema,” and always brought attention to the panoramic visual qualities the band developed in their music. This DVD/Blu-ray collects a number of allusive and unique moments where the celluloid media captured the group at the best, their strangest and sometimes at their most humorous and awkward.

While not containing a plethora of live performance footage — Doors fans know that is a rare proposition….. R-Evolution nevertheless is a diverse exploration of the numerous ways the Doors and their music was presented to the public. The video clips range from the dark mystery of the band’s own promotional films, to the oddly humorous television appearances on Malibu U and American Bandstand. Some of these clips may be familiar to the hardened Doors aficionado, but rest easy, there are plenty of rare goods that will excite even the most knowledgeable fan. The collection successfully straddles the line between fanatic and recent convert, containing enough relevant classics to grab the uninitiated and enough new footage to keep long-time listeners interested.

Doors veteran Bruce Botnick again lends his legendary abilities to working out the pristine sound, in addition to a full video restoration that was undertaken for the best visuals possible.
The footage moves chronologically, launching at the beginning with the familiar shadowy promotional video for “Break On Through” recorded in November 1966, its viewing a total contrast to the light fare being disseminated in early music videos by groups such as the Beatles and Monkees.
The stiff and rigid Doors look slightly shell shocked in their appearances on Shebang and Bandstand. hailing from mid-1967. While still developing their persona and assimilating to the television medium, these early views show the group working on building the image they aspire to portray. The humorous Dick Clark interview with the band is must-see viewing, a moment thankfully captured for posterity for our viewing pleasure and immortalized on this set. 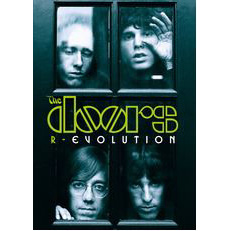 Another highlight of R-Evolution is the color Doors appearance on the short lived variety show Malibu U, where the band performs on the back of a beached fire truck amidst bubbly, bouncing beach teens. “Light My Fire,” indeed. Morrison was unable to make the filming, so the person you see acting as Morrison with their back to the camera is Krieger’s brother! The footage including Jim was edited in at a later date when he was available. There are a series of rare outtakes included in the bonus features where Morrison lip synchs his parts for addition to the already-shot video.

The complete and windblown street video of “People are Strange” from the Doors’ Murray the K performance in 1967 is included here in beautiful quality, with Morrison in full up-all-night mode as the Doors gather around him instrument-less. The vivid “Hello I Love You” video from the 1968 European tour is also here in its entirety, including a swinging and groovy dancing girl! The original 16mm banned promotional film for “The Unknown Soldier” is also included, and it’s as startling today as it was 45 years ago, now featuring full vivid color and upgraded sound.
Again, while some of this video is not new, it is upgraded both sonically and visually, making past appearances obsolete.

The video clips created during the band’s lifetime conclude with the fly-on-the-wall “Wild Child” studio promotional film, the famous “Roadhouse Blues” short, comprised of an abundance of priceless road footage, and the more-recent 2006 discovery of the band rehearsing “Crawling King Snake,” dating back to December of 1970. This black-and-white footage originated from the Australian television show Get to Know. This clip finds the Doors knee deep in the midst of recording L.A. Woman, and firmly entrenched in their bluesy element. It’s the last known television footage of the original Doors. A fully bearded Morrison acts the part, “singing the blues ever since the world began.”

The rest of the collection is made up of posthumous videos created after Morrison’s death and included on various home-video releases over the years. The unique Strange Days music film from 1984 brings the album’s cover art to life and is the most stirring of these final videos. A trippy and slightly disturbing clip, it stands a notch above the late-era videos.
The “L.A. Woman” video, in my opinion, has not aged well and is need of a major overall, but this miss is forgiven with the inclusion of the contemporary video of “Ghost Song” — which finds the remaining Doors paying tribute to Morrison through music and imagery.

There is real gold to be mined in the bonus features, which contain an assortment of special added clips. The 1966 Ford Motors training film, Love Thy Customer, is perhaps the most eclectic of these features, finding the Doors contributing moody incidental music to a black-and-white customer satisfaction film. The music is tucked under the movie’s dialog, but can be heard and is quite enjoyable.
A director’s cut of the circulating performance of “Break on Through” from Isle of Wight 1970 is also included, and is a welcome addition to the set with the lack of available footage from this time period. Finally, there is an informative and enjoyable documentary called, Breaking Through the Lens that expands on the available information regarding the collected films. All of this is available with the option of added commentary by the band members, expanding on the information with tales from each video clip. 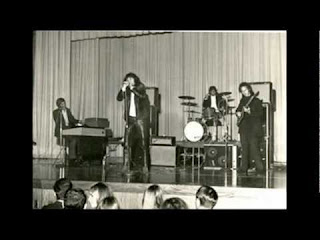 Similar to fellow musical contemporary Jimi Hendrix, the Doors fit a tremendous amount of artistic creativity into an extremely condensed period of time. This era has been investigated and disseminated to the point where fans have to wonder if there is anything else to be released. This recent video collection has answered that question with a resounding “yes,” meaning there are things always popping up worthy of release. On the flip side, I have to say with complete honesty; by the end of this collection the thought crossed my mind that this has to be the end of the line for the Doors on film.

As such, R-Evolution acts as a definitive statement of the Doors on film, the punctuation at the end of a strange career. Curious fans who want to see what the phenomenon was all about, or old heads and completists who need it all, can find something of interest by cracking the historic doors contained within this collection.

Posted by talkfromtherockroom at 12:14 PM