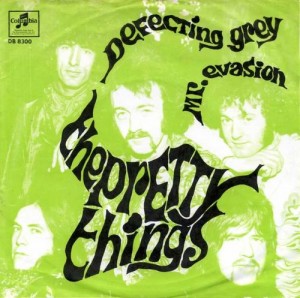 Originally composed as an extended hallucinatory epic and then edited down due to vinyl restrictions to fit on the ‘A’ side of a 7’ singles, The Pretty Things November 1967 single ‘Defecting Grey’ initiated the ‘Pretty’s’ move from revolutionary British R & B to some of the era’s most rich psychedelia. A band that never reached the overseas popularity as many of their contemporaries, ‘The Pretty Things’ impressive catalog includes but is not limited to rock and roll’s first ‘rock opera’ (pre-dating Tommy).

The groups mid 1960’s output ranges from the gritty R &B that earned them their reputation in England through the subject of this rant, their experimental period leading up and through what many believe to be their pinnacle, the 1968 LP S.F. Sorrow; a song cycle telling the tale of protagonist Sebastian F. Sorrow’s journey through his own life cycle.

‘Defecting Grey’ is S.F. Sorrow’s younger sibling, the song that gestated into Sorrow. Founding Pretty Phil May is quoted as saying in an interview with Richie Unterberger about the track, ‘That's about somebody who -- in those days, we used to call it "Grey", somebody, like, who does a job.  Grey suit, really.  And this was somebody, like the people we've met, who suddenly realized that everything they'd lived for, and were brought up to believe in, possibly wasn't right.  And this guy was actually going from being very straight...he was becoming homosexual, or his homosexual side was coming out.  But of course on the record, nobody picks that up.  But it's "sitting alone on a bench with you, the brush of your hand, chasing shadows away", that's the story.  But it didn't matter what people knew about it.  It was our idea that made us make the music.  'Cause we knew what we were doing, what the story line was; and the same with S.F. Sorrow.  Once I'd written the story, we suddenly had something to work from.  We had like 14 months to make this picture up.’

The song was the recipient of the band’s forward thinking, dabbling in psychedelics and the influence of their contemporaries, especially ‘Pink Floyd’ whom producer Norman Smith worked closely with during the same period.  Similarly to many of their contemporaries the group was leaving their formative R and B/Blues beginnings behind for deeper sonic experiments. Norman is also well known as engineering with George Martin on many Beatles recordings. Lyrically the song takes place in the pastoral setting of a British park, a bench the central location to the swirling cinematic changes that occur throughout the song. The lyrics remain stationary and disseminate the interesting narrative while the sonics paint the rest of the image. The track is a pastiche of segments and musical elements that develop together into the bigger image of the track.

Inspired by classical music, and the idea that an album should be an experience as opposed to a collection of singles, ‘Defecting Grey’ was the miniaturized impetus of this prospect. It’s almost as if the ‘main’ parts of the song, the ‘waltz’ verses of the arrangement play through as a normal song would. There is then a layer of sonic experimentation, an origami with soaring panache of sound layered over the framework where the ‘original’ arrangement can peak through.  The song is truly a multifaceted composition with tempo and key changes the norm, but somehow perfectly stitched together.  Transitions abound in both available versions of the cut. I am listening to the 1967 extended version which currently only exists in mono (like the single) from acetate which is the group’s original intention as they recorded it.  But I will also mention aspects of the officially released single reading which loses some of the extended aspects of the unreleased version. Even Norman Smith understood the organic story taking place in the song and did not feel like it required editing. Regardless, both versions of the track are very important and vital chapters in the psychedelic movement in 1960’s Britain. The single is tighter but the uncut version is like looking at a painting without the frame.

The song opens with an exotic, psycho-oriental descending melody line drizzled over the top of a dark  quivering , its sound caused by dropping a guitar to the studio floor. The carnival waltz of the verses bounds in, with a undulating bass and double click of a hi hat. Povey’s keyboards lend a smiley melody line, British dance hall at its finest. In spite of the comfortable pastoral setting, Phil May’s vocals sound if they are coming from ‘beyond the pale’, ghostly and mysterious.
Once the listener slides into a somewhat comfortable state, a disorienting and deformed backwards guitar and oscillated sitar (borrowed from the Beatles at Abbey Road) sweeps over the verse rising in intensity and color washing the track into a significant freak out.

The lush setting is sprayed in guitar day-glo. The rhythm intensifies as the jagged edge of Dick Taylor’s guitar rips into the fabric of the song. On the single version the guitar immediately explodes while on the extended version there is a chunky rhythmic lead in before the dissection begins. The ambiance is that of an alien sunset melted into a musical format.The music becomes weighted and begins to thrash around fuzzy and jagged. This is pure psych distilled to its mind-bending essence. The violent stomp soon dissipates into a fabric of exploding star fragments. The listener will be hard pressed to find such a stunning display of guitar distortion and effect captured on record. 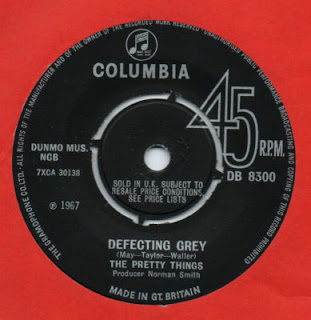 After the distorted interlude a thick sonic wash acts as a disorienting segue back into the verses. The verses teeter totter to and fro again gently before being suddenly interrupted by an additional interlude. This movement is different from the heaver breakdown preceding it, this moment is a swirling vocal centered change a gentler approach than the first breakaway from the verses. The vocal melody line reminiscent of later Pretty's track 'Balloon Burning'

The final musical segment breaking apart the verses returns to the framework of the first aggressive freak-out of the track. A stringy electric beam of feedback blasts through the arrangement encouraging Povey’s keyboards to hurricane themselves into a swirling wash of white noise while underneath a gritty rhythm track chugs away.

The haunting verses appear once again this time now broken up by an unexpected dance hall interlude which peaks its head around the woody corner of a pub doorway. The contrasting sing-along pub segment is quickly sponged away as the verses appear again before sauntering away into the playground horizon and the slow fade out of the record. 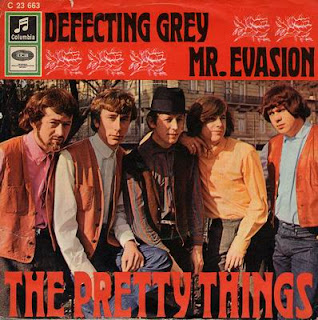 In an era where musical creativity was reaching its apex and rock and roll bands were finding new and different ways of expression, a number of bands outside of the Beatles and Stones were releasing experimental and stunning records. The Pretty Things ‘Defecting Grey’ is one of those records that because of the wealth of creativity in the era made a statement and then fought for recognition as time passed on. The track encapsulates an era in the broader picture and represents a highly creative moment of the Pretty Things career when looked at in a macro level. The visceral track was influential to fellow musicians of the time and thought provoking for the music buying public and remains a song worthy of inspection and refection.

Posted by talkfromtherockroom at 7:34 AM