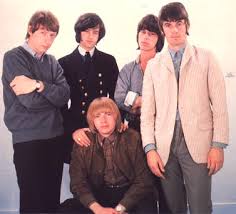 Now playing in the ‘rock room’ is a historic slice of celluloid featuring the revolving  guitar line up of the amazing ‘Yardbirds’. This particular footage finds the group in the midst of their Summer 1966 European tour. The band at this point was famously becoming the ‘farm team’ for developing amazing guitarists. The beginnings of the group’s career started with Top Topham, then moved in Eric Clapton, then Jeff Beck and finally Jimmy Page. The black and white segment flickering in the ‘rock room’ today follows founding member and bassist Paul Samwell-Smith’s departure from the band to move behind the scenes and into the production side of music. He was replaced by session guitarist extraordinaire Jimmy Page and for a brief but amazing time the band contained both Jimmy Page and Jeff Beck.

The performance featured here finds the band performing on June 27 1966 at Mon Provins, France tour de Cesar. The site of the concert was a military compound famously built sometime in the years 1150-1180. A very eclectic and rustic site for a rock and roll show; the bands featured and sharing the bill with the Yardbird’s were also an amazing mix of talent. The Small Faces, Simon and Garfunkel and Screaming Lord Sutch and the Savages also were slotted into the featured lineup. The groups were being recorded for Michelle Arnaud’s Music Hall de France, television broadcast The Train Kept a Rollin. The Yardbirds’ personnel grouping at the time was Jimmy Page on bass,  both Jeff Beck and Chris Dreja on guitars, Keith Relf on vocals and harmonica and Jim McCarty on drums. This is Page’s fourth performance with the band. Upon Beck’s departure Dreja would move over to bass and Page would then take over guitar duties with stunning results.

At this formative time in the band’s history the group was developing their blues excursions into psychedelic and expansive musical expressions centered on stupendous guitar playing and the increasingly complex musical compositions. Here the band plays a high octane three song set made up of ‘Train Kept A Rollin, ‘Shapes of Things’, and ‘Over, Under, Sideways, Down’.

The clip begins with a medieval ‘Yardbirds’ flag being unfurled down the stony castle walls as the band rattles their way into the Johnny Burnette  cut, ‘Train Kept A Rollin’. McCarty firecrackers the opening on his kit as Page proceeds to lay down a stunning bass line behind the two guitar attack of Dreja and Beck. Relf directs the locomotive of sound with well timed harmonic moans that keep the silvery sound grounded in its blues roots. The quintet is dressed sharply in white suits that elicit the similar Carnaby Street style of the Beatles 1966 Japan tour outfits of the same vintage. After a rollicking sprint to the station, ‘Train’ is quickly concluded a spike driving opening to the show.
The only unfortunate aspect of this footage is the ‘television sound’. 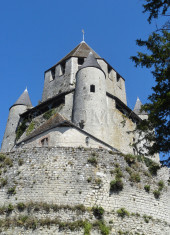 While concentration and a discerning ear can pick out all of the respective elements, the sonics could be much better, but this is to be expected for a 1960’s television broadcast. The guitars are mixed low and the vocals high but the existence of such footage renders these shortcomings naught. The band is in fine fettle and their collaborative expressiveness noteworthy.

The military march of ‘Shapes of Things’ follows and plays with a tripped out punk attitude. McCarty slams around the kit crisply. The song was an early 1966 single for the group and was not only groundbreaking aesthetically but influenced the band’s contemporaries with Beck’s deft use of feedback as well as the paisley tinged Eastern influence that permeates the song. Here Relf’s voice quivers as he recites the lyrics, and the mid song breakdown detonates in ‘Who’ fashion with both Page and Beck thrashing at their axes. Beautifully done.

The most recent single from the group at the time follows and concludes the brief but well played set. ‘Over, Under, Sideways, Down’ was released the previous month and here gets a kinetic reading with Beck’s strangled and wailing soling a highlight. Playing a vintage Gibson Les Paul Beck’s fingers pull from the neck the track’s recognizable and tightly coiled signature lick.  The three headed back line of guitars stand clustered around the backing vocals microphone stand stomping their boots in unison. The reading featured here is a lucky capture and classic live reading of one of the ‘Yardbirds’ most well known cuts. 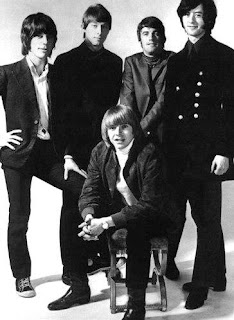 While lasting just under seven minutes this rare sequence captures not only a fleeting period in the ‘Yardbirds’ history but is a welcome addition to the ‘Yardbirds’ canon as a document of their influence and proficiency as a live act. All the band members unique and individual strengths are on display As far as the ‘legends’ go, we all know where Beck and Page’s careers would eventually lead them; but this mid-1960’s film reference is a unique look back to where they cut their teeth and how they developed their craft.

Posted by talkfromtherockroom at 6:23 PM