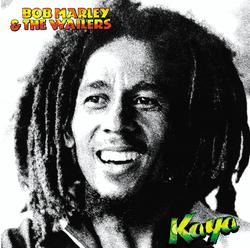 Following the heinous assassination attempt on Bob Marley’s life in December of 1976, he flew to London to escape the imminent threat hanging over him in Jamaica. He’d spend more than a year in Britain, developing and recording songs that would eventually make up both 1977’s Exodus album and Kaya, the subject of this ‘rock room’ rant. In addition to the overwhelming stress caused by the political ire directed at him, Marley was also to begin to battling the melanoma discovered in his foot that would lead to his eventual demise
Kaya allowed for the pressure of being a spokesman, activist, and leader to subside momentarily, while enabling Marley to mellow the mood musically. Whereas Exodus had changed Marley’s life personally and politically, Kaya would detach him from it for a time.
A record that sits in complete contrast to the politically charged and world-renowned Exodus, Kaya has a serene and stony, roots-reggae groove. Kaya is Jamaican code for marijuana, and the cover art of the original LP contains a massive smoldering rasta joint,  a preview to the levitated Jah attitudes pervading the recording. For this album, Marley stepped back from his mystical preacher man and human-defender status, taking time to reflect on his new view, regain his sanity, and express his one love. This sneaky record is sometimes forgotten in the context of Marley’s larger discography, obscured and bookended by the lyrically dense collections Exodus and 1979’s Survival.
Upon its March 1978 release, Kaya was criticized as light fair, an album of beautiful songs played through a smoky blue haze. Yet, time has revealed them to be filled with deep personal insights, conveyed through expressive Marley vocals and clairvoyant instrumentation. While the attitude that permeates the record at glance may be one of ganja, praise and love, a concentrated look shows personal songs dealing with fear and faith. The Wailers were road practiced and as tight as blood brothers during this era, working in conjunction with Marley entering a prolific songwriting stage of his career due to the aforementioned inspirational and life changing events.
Kaya emanates a vibrant and contagious positivity as soon as the needle settles into the grooves, as ‘Easy Skanking’ undulates with a thumping bass drum that punctuates the elastic vocals, stretched like warm waves drawing shore sands into their depths. The ganja smoke is hearty, as Marley sings: “Excuse me while I light my spliff,” and continues through the vibrant red, yellow and green drift of the title track. 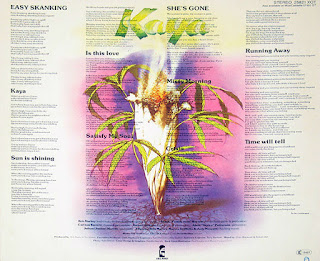 'Kaya’ is a squishy sweet number, containing colorful keyboards and fruitful vocal exclamations and is an appropriate groove for the title track. Another lidded expression of love for Ganja. The major radio hit of the album follows, with the popular “Is This Love,” a song rooted in its addictive melody line. A hearty sleek dual guitar line becoming the centerpiece. Once the tune makes winds way to your ears, it’s soaked into your head for the duration. A fine Marley classic, the Wailers sound like an island orchestra, while Marley and the I-Three’s commune vocally in stirring fashion.
The Wailers were every bit the mirror reflecting Marley’s muse, the interpreters of his dreams, and relaters of his attitudes and they have never sounded better in a studio setting than on the crisp representation of Kaya.
‘Sun Is Shining’ slithers out to a new dawn, bringing the vibe down slightly, slinking with a sexy one-drop groove. This track features some of the finest Marley vocals on the recording, fluctuating between smooth grooving and rough pleading, coupled here with a dynamic and clean guitar accompaniment by Junior Marvin.
‘Satisfy My Soul’ closes side one of the original LP, with the swelling horn section shouldering the songs watery melody line. Marley is again hopelessly optimistic lyrically (“I am happy inside, all, all of the time”), pledging his love to the song’s subject — if she can, indeed, ‘satisfy his soul.’
Side two of the record opens with a slightly different vibe. Similar to the way a wispy veil of clouds moves past and rests in front of the sun on a clear day, the songs of the flip side shade the buoyant attitude of side one with slight shadow. As ‘She’s Gone’ begins, its radiant melody disguises a hazy air of regret and sadness lying underneath the surface. The vocal relationship between the I-Threes and Marley is again a highlight; their call and response, playful echoes, and soul accents are a joy to behold.


‘Misty Morning’ is a personal favorite of the album: Its dramatic delivery is a wade through choppy waters, operating on a saw-sharp acoustic guitar and twine-tight rhythmic interplay by the Barrett brothers, on bass and drums respectively. Marley lets it go vocally and, while the backing singers and horns intermingle, his voice soars, floating above and sinking below the churning Wailers. His wordless exclamations throughout the track are proof of his investment in this song.
The thematic thread connecting this album’s final three songs is one of turning inward for moments of introspection and realization. The first, ‘Crisis,’ begins with Marley singing in his full island dialect and diction, the band snapping the spring with a riff that echoes the introduction to ‘Is This Love.’ Marley directly points to his Rastafarian religion, with the belief that “no matter what the crisis is,” Jah will carry him through. 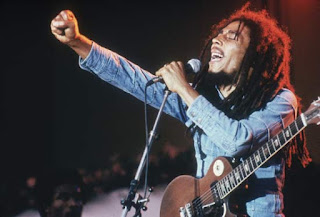 ‘Running Away,’ which follows, is a umbrageous track that would become one of the few from this album to be consistently played in concert. Often paired with ‘Crazy Baldheads’ on stage, ‘Running Away’ is a moody mantra that contains lyrics designed to comfort Marley himself, as he shares a response to people who question his motives in leaving Jamaica. The classic, meaty ‘One Drop’ rhythm supports Marley’s diverse and free-form vocal approach, in addition to supporting the tune’s flashy keyboard accents.


Kaya closes with the magnificent ‘Time Will Tell.’ Acoustic in its sensibilities, and containing such pure and soulful vocals by Marley, it’s hard to not be moved. The tribal song rolls forward on the organic cadence created by the thick, woody bass line, and skin on drum thump. More electric instruments peak their heads into the song’s framework as the tune develops. The momentum gained by ‘Time Will Tell’ is built by the hand-driven groove and outlined by the thick penmanship of the bass. The pastoral quality of the track closes the album perfectly, leaving the listener to ponder the statement: ‘Time alone, oh, time will tell; think you’re in heaven, but you living in hell.;


Kaya is a record that finds Bob Marley learning how to pull away from what he had been pressing toward for so long. The album not only celebrates his love of life, ganja and women, it also offers glimpses of his vulnerability, apprehension, and faith. Even the deepest Marley fan can forget the virtues of the album that was created between two definitive, militant and amazing records in Exodus and Survival. Kaya is doors-open and windows-down music, made for times both good and bad,  a soundtrack for when life needs a just a little bit of a lift.
Bob Marley and the Wailers Kaya 1978
Posted by talkfromtherockroom at 7:52 AM