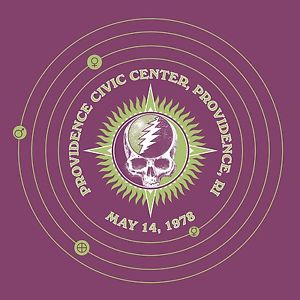 The Spring of 1978 is a time in Grateful Dead history that presents a multitude of unique and exciting musical moments. When examined as a whole, its easy to discern that the tour rides the rails precariously, always close to spiraling out of control. But with this daredevil attitude the band in turn creates a number of delightfully devastating musical masterpieces. While often obscured in the shadow of the monumental 1977 tours, the Spring of 1978 finds a different and even looser band than the previous year. The band can be heard jamming nightly, all the while balanced delicately on the edge of chaos and musical magic. A number of official releases from the Dick’s Picks and Dave’s Picks series have now been culled from April and May of 1978 ( DaP 7 4-22-1978, DaP 15 4-24-1978, DP 25 5-10/11-1978) and offer the listener a glimpse into the power and still occurring nightly experimentation by the band.

Jamming today in the ‘rock room’ is the Grateful Dead’s May 14, 1978 performance from the Providence Civic Center, released as the sole representative of the year 1978 in the expansive 30 Trips Around the Sun box set covering the band’s entire career and released in 2015. In the ‘rock room’s humble opinion this particular performance is the best of the May leg of the tour and was rightfully chosen by vault archivist David Lemieux for inclusion on the band’s career spanning collection.

One thing about this particular concert and similarly to the other surrounding shows on the tour is the patience, tempo and positive vibes exhibited by the band. In direct contrast to some of the measured and tentative playing during some dates in 1977, by the Spring of 78 the band was ‘going for it’ musically and vocally on a consistent basis. There was a conscious collective attitude to be bigger and badder than previously and the group was thrashing through East coast sheds as a rock and roll fire breathing beast.

The Providence concert opens with an amped crowd and the aesthetic of a warm Betty Cantor soundboard recording. The band plays with a calm focus right from the get go, Garcia is particularly sharp and Godchaux plays expressively throughout. You can tell that there is something different going on by the subtle interplay and animated vocal expressions sprinkled throughout the set.

The opening ‘1/2 Step’ is locked in and by the first solo section Godchaux and Garcia climb the framework of the song together as hearty multi limbed musical vine. They dance one another across the stage as this ‘1/2 Step’ plays itself toward perfection. ‘Cassidy’ follows and again offers the band an early chance to open things up. Continuing the first set theme thus far the group is playing inventively and crisply. Easily one of my personal favorite performances of ‘Cassidy’ follows with the only misstep being no vocal reprise upon the return from the mid song jam, but they hit it perfectly so who cares?! Garcia’s guitar is big and brassy with every note fired hitting its mark. While Lesh’s playing is understated at this point he too is placing perfect fingers.

Following this breathless beginning a buoyant ‘They Love Each Other’ plays with pluck and pop. Garcia’s vocals are emphatic and invested culminating is a well paced and excellent rendition.
There now comes a mid set space for introspection as the band takes a moment to collect themselves following the opening series of home runs. An all time version of ‘Looks Like Rain’ and a similarly expressive version of ‘It Must Have Been the Roses’ take the air out of the set slightly but are so damn good you have to shake you head at the musical quality being put forth by the band.
A typical for the era ‘Uncle and Big River’ combo comes next and stokes the crowds fire quickly with a high speed ‘River’ that percolates into a foamy rapid rather quickly. Before anyone can catch their breath two additional ‘all time’ versions close out the opening set.

First Garcia busts out a kinetic and high speed ‘Brown Eyed Women’. Weir is playing with a particular attention to detail and I would be remiss if I did not mention the excellent and dynamic playing by the drummers. Bill and Mickey were playing really well in mid-1978, illustrated by the expanding drum segments that were soon to become a second set fixture. The tempo is snappy for ‘Brown Eyed Women’ and prods Garcia into taking a few rounds on his solo spot and developing a perfect melodic story between verses. A fine version.

Crowning the first set is the longest stand alone ‘Let It Grow’ the band ever performed. Quantity does not always mean quality but in this case the band has a lot to say and makes sure they pack it all into a top 5 version of the song. Patience is again exhibited by the band as each nook and cranny of the songs arrangement is explored for opportunity.

Once the songs verses are harvested Garcia sets the chugging groove with wiry rhythm strokes. He begins soloing with a heavy distorted tone but soon cleans it up and begins his exploration. Lesh keeps things in the lower register and latches on to the rolling tempo picked up by the drummers. At around 8 minutes the jam is moving by its own inertia with syncopated cowbell strikes and Godchaux’s rapping and succinct piano exclamations. 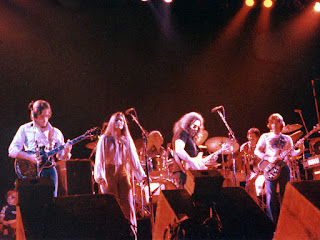 Garcia begins to wail extended one note over driven notes, Godchaux responds in kind and a unique impov develops over familiar themes. The detailed jam moves like smoke until Weir interjects some cool chord ideas around 11 minutes. Lesh continues to lather multicolored paste into the cracks and stays submerged growling in the lower registers. Garcia repeats a beautiful cadence before using it a springboard into another room and discovering there a poignant finger picking pattern. He circles around the drummers riding a circular pulse that Weir dissects and Godchaux drizzles sweet notes on top of.

At almost 15 minutes the band returns to the chorus briefly before exploding out of it with a series of ‘Caution-esque’ alternating guitar scrubs. Garcia stacks trills on top trills initiating the band into a proper peak and well timed expression of intensity that had been building throughout the set. High octane. Garcia botches the landing slightly, but all is forgiven after the preceding expression of musical prowess. Wow, one of the finest sets you could ever want to hear from the band. A highly recommended performance.

Obviously, the band has lost no momentum during the set break, returning to the stage as playful as they were for the opening set. As fans of the Dead we know that the set list in no way reflects the strength of the playing which is the case for the beginning of set 2 which begins with the oft played ‘Samson and Delilah’, ‘Ship of Fools’ duo. Here, ‘Samson’ is filled with the exaggerated and growling vocals that epitomize shows of this ilk. The groove is intricate and the interplay is top notch, Garcia, like has been previously stated is on the prowl for new expressions of well traveled melodies. ‘Ship’ is not a  Persian dirge and is played with terrific energy, and is an enjoyable version which again comes from an era in which there are a number of well played renditions.

The centerpiece of the second set is a beautifully paired ‘Estimated Prophet/Eyes of the World’ pairing that spotlights measured playing and attentiveness to the muse. The ‘Estimated’ never strays far from home, but offers an extended outro jam that flows effortlessly toward a crystalline movement toward ‘Eyes’. While not ‘rolling’ like other ‘Estimated’s’ of the period the band only probes at the improvisational possibilities before Garcia signals an excursion into a high tempo ‘Eyes’. While played quite fast the music takes its time. Here the band coalesces into one unit playing a great version where all respective parts contribute equally. The song’s journey into drums is slyly understated yet musically intoxicating. Garcia and the drummers toss ideas back and forth for a bit as the rest of the guitarists leave the stage for drums.

If you are familiar with 1978 you know the drums are long, intense, tribal and crazy. This one is no different. Every implement on the stage is used to bang on something. Billy and Mickey eventually thump their way into the familiar ‘Not Fade Away’ beat.

An imposing and extended post hiatus ‘Not Fade Away’ coagulates out of the aforementioned drum madness. Keeping with the theme of the whole show the band takes their time in exploring each space in this long performed classic. The pre verse jamming finds Garcia throwing out as many different melodic variations on the Bo Diddley beat as he possibly can. Here the playing is more laid back than explosive allowing for 7 minutes of grooving before the verses are sung. Weir coaxes some gritty strumming from his ax during this segment shifting the drummers approach.

In direct opposition to a version like the one from Englishtown, NJ 8 months earlier, here the intimate interplay is critical and the musical carpet bombing of the crowd found in the aforementioned is secondary. The energy spikes when the verses are sung and the first solo segment is highlighted by Garcia’s thick Mutron licks and Lesh’s rubbery lines.

The second jam segment following the verses shows Garcia hitting on a lick that almost lands into ‘Nobody’s Fault But Mine’ which Lesh then takes an interest in and  Weir joins in on with some (tasteful!) slide playing. The jam turns bluesy and becomes a very enjoyable and uniquely sweet march that Lesh and Garcia soon twist into a somewhat rare for the era version of ‘Goin Down the Road Feeling Bad’

‘Goin Down the Road Feeling Bad’ tears out from ‘NFA’ and takes the place of a usual post drums Garcia ballad. Weir adds some slide guitar, Lesh lets go with a few detonations and the rest of the band takes the song to a higher plane. The crowd is ecstatic and the band responds in kind. ‘GDTRFB’ slams into the side of an incendiary 1978 version of ‘Around and Around’. The band basks in rock and roll glory as they stomp through the songs stops and starts and sprint through the double time conclusion. Woah.

Garcia screams his way through a celebratory ‘US Blues’ encore and just like that the band is on the bus to Chicago. In an era that sometimes fluctuated between musical epiphany and sluggish repetition (sometimes in the same set); May 14, 1978 touched upon the musical grail that the group tried to grasp on a reoccurring basis. Though this show did not take place in a vacuum, as there are a number of worthy performances to be found in the surrounding dates. This one is at the top of the list in the humble opinion of the ‘rock room’, check it out for yourself.