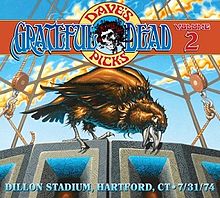 Jamming aggressively in the ‘rock room’ today is an early offering from the Dave’s Picks vault release series. In preparation for the upcoming 1973/1974 Pacific Northwest box release from the Grateful Dead’s bulging musical vaults  Dave’s Picks Volume 2 finds the band lugging the famed Wall of Sound to Dillon Stadium in Hartford, Connecticut, on July 31, 1974 , smack dab in the middle of their summer excursion. The recording offers a generous three-set classic marathon show, similar to others of the same ilk such as 5/12/74 and 6/16/74 that feature multifaceted improv and extended performances. An assembled crowd of 20,000 filled the ample arena to which the band had recently graduated, after years of previously playing theaters.

The three disc, spring-water clear soundboard recording — lovingly curated by David Lemieux and mastered by sonic mater Jeffry Norman — offers more than three hours of music from when the Grateful Dead couldn’t get enough of ‘Playin’ in the Band. What is unique about this 1974 performance, other than its length, is that “Dark Star,” “The Other One” and even the aforementioned “Playin in the Band” do not make an appearance on this particular evening. But then there’s the hearty improvisation that takes place late in set three, emerging out of a raucous ‘Truckin'’ — just another reason, if one was needed, as to why this particular evening found its way into the Dave’s Picks series.

A simmering 12-song first set kicks things off, fitting snugly on disc one of the set. The Grateful Dead pull the ripcord on a perfectly paced concert with the still-youthful ‘Scarlet Begonias,’ represented here in a crisply executed, compact package. Elsewhere, highlights include the unique pairing of ‘Mississippi Half Step Uptown Toodeloo’ with a freshly picked ‘It Must Have Been the Roses’, to great success. As well as a huge “China/Rider” — one rivaling that of the legendary 6/16/1974 as it rattles the windows while riding the rails at a high velocity. This version exposes the Grateful Dead at their best, while the gray area between the songs reveals numerous beautiful musical secrets. The central jam finds Jerry Garcia at his most expressive piloting the band through diverse terrain. 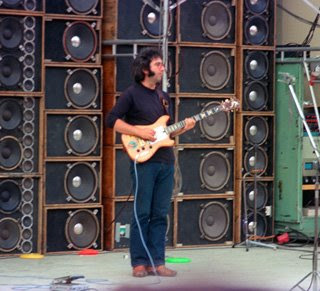 The second set opens breathlessly, as the Dead offer rolling versions of ‘Bertha’ and ‘Big River.’ The real magic, however, occurs with their pairing of “Eyes of the World/China Doll,” which spans 23 minutes. A beardless Garcia spars with a bearded Phil Lesh over control of the ship, with dual lead lines that wrap around one another like the arms of lost lovers. This version; which is one of the best from a year brimming with them, features a loose, airy groove pushed by Bill Kreutzmann to greater heights, even as the group threatens to drift away like a misplaced newspaper on the wind.

The outro jam becomes disorienting, with the band breaking into differing combinations, the improvisational balloon ascending , then becoming still for a moment before falling directly into the ‘Stronger than Dirt’ theme. Garcia peels the musical fruit like a ravaged animal hungry for more, while leading the band through an abundant series of dynamic funk themes. These themes become burned at the edges before deconstructing into a swirling particle space that slowly fades into the delicate sparseness of “China Doll.” In spite of some initial tempo concerns, the song transforms into an enjoyable version. 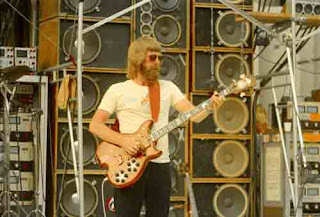 A typically wonderful 1974 version of the “Weather Report Suite” concludes the second set in a dramatic, hold-your-breath fashion. While not the usual springboard for improve, the jamming is fast and furious. The third and final set then gets underway with an oddly placed ‘El Paso’, then continuing through a vintage run of well-played songs that culminates with a back-country porch version of ‘To Lay Me Down.’ One of only seven versions from 1974, the song would make only two more concert appearances before disappearing completely until its resurrection in 1980. This ornate reading is a highlight of Dave’s Pick’s Volume 2 and a fitting prelude to the rubber-burning exploration of ‘Truckin’ that follows.

‘Truckin' had been overhauled and retooled in 1974, often becoming the main source for an evening’s improvisations. There is a laundry list of 1974 versions where the band takes off of  down the highway and into unknown destinations (5-19, 6/16, tc) yet this version may be the finest …hence its inclusion on this set. After disposing with the usual verses Lesh starts to immediately get frisky on the outro jam. The band locks into a chooglin’ rhythm, while Garcia squeezes rich, clean tone droplets from his axe. He then signals the ‘Truckin'’ siren, with a beautiful reading of the climatic jam that would somewhat lose its effectiveness in later and leaner years. ‘The Other One’ is brushed up against, before Garcia spaces out at about ten minutes, with the group circling around him in a psychedelic standoff. The Grateful Dead searches for and finds the sweet spot, traversing strange tones, basking the warm rays of free improvisation then moving confidently through numerous and diverse changes in sympathetic gestalt linkage.

As the music gets lodged between clouds, Lesh becomes ornery and Keith Godchaux answers in glistening erratic piano runs. Lesh trills his ropy strings like some monstrous fluttering moth, initiating one of the finest band instrumentals created in the summer 1974. Everyone is playing at their absolute peak abilities. From this formlessness the Grateful Dead  search out the ‘Mind Left Body’ theme, while still dynamically freewheeling their way into a poly-rhythmic syrup that tumbles over endless precipices. 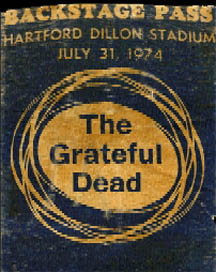 A slick but distorted blues jam soon develops, intermingled with pinches of the Spanish theme that eventually — through Kreutzmann’s and Lesh’s inference– becomes a full-on ‘Spanish Jam.’ The band deftly sneaks in and out of mirrored rooms, before brightening the vibe and slipping back into ‘Mind Left Body,’ as a portal into a shady docking with 'Wharf Rat.' Unbelievably, the Grateful Dead follow this explosive display with three more songs but, at this point in Dave’s Pick’s Volume 2, I am still digesting the previous musical triumph. I’m sure the attendants of the concert appreciated the warm send off by the band, and appreciated the rock and roll finish being smoothly frosted over by a sweet Uncle John’s Band.’

In the end, Dave’s Pick’s Volume 2 is a massive concert capture and a classic representation of everything that made a Grateful Dead show the place to be in 1974. Thankfully preserved by the band on tape and posthumously shared by their vault, it just goes to show that there are certain years in the band’s history that will continue to harvest sonic rewards, no matter how over represented or discussed. This is a good un.